American Sports
May 1, 2015
By Mark Farrelly 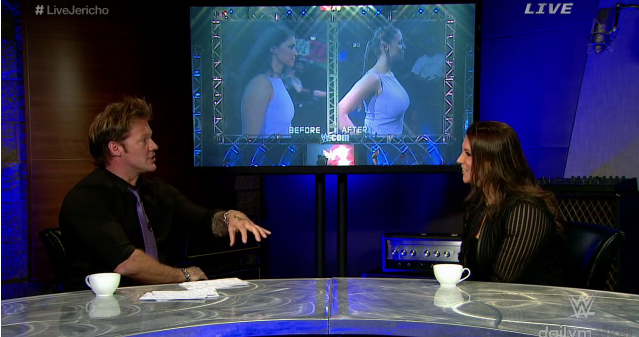 Chris Jericho and Stephanie McMahon sat down together for another of the big 'shoot' interviews that have graced the WWE Network since its launch. The one hour interview didn't pack too many punches or there wasn't anything all that controversial in it but one thing that old school fans might enjoy was their chat about their own feuds during the Attitude Era.

Y2J and McMahon had brilliant chemistry together back in the day and the pair discussed one segment in particular where she had instructed him to make fun of her boob job.

McMahon explained why she told him to go after her for it 'The thing is, it was very obvious. How could you not go there? So I felt,just call it out. Just get it out there.'

The same segment resulted in The Rock getting a dressing down for Vince McMahon for saying 'motherfucker' during a promo; albeit Stephanie was meant to cut him off mid-word.

Here's the segment they were referring to.