This is not kayfabe. It's 25 Years from Saturday since WWE Legend Kurt Angle won an Olympic gold medal at Atlanta 1996.

While many will be skeptical of the WWE and the reality of professional wrestling, few harder men graced the ring than Kurt Angle.

Angle, who wrestled with the WWE predominantly between 1998 and 2006, began his pro wrestling career with an 'American hero' gimmick and a gold medal around his neck.

The reality of his character was based on his amateur wrestling career, highlighted by a gold medal win at the Olympics in 1996.

Kurt Angle was a two-time NCAA amateur wrestling champion for Clarion University in Pennsylvania. In the years that followed, he continued to wrestle at national and international competitions.

Angle won gold at the FILA Wrestling World Championships in 1995, which setup his preparation for the Olympics a year later.

He trained in the infamous Foxcatcher Club in Pennsylvania, which was the story of a Hollywood film in 2014. The practices of owner John du Pont eventually amounted to murder of Angle's trainer Dave Schultz.

As if the death of his trainer wasn't enough of a dent in Angle's Olympic preparation; he also suffered a gruesome injury in his Olympic build-up.

Olympics day 5
This is a photo of the finals of the 1995 world championships,where I won the gold.The only thing left to conquer was the 1996 Olympics. Oh, and by the way, I did it with a broken freakin neck.I probably say that way too much! Lol #itstrue @olympics @usawrestling pic.twitter.com/o9lRQPWpdM

It all happened in the semi-finals of the Olympic trials. A doctor miraculously cleared him to compete in the final which he eventually won against all odds.

The win left Angle with five months to rehabilitate and prepare for the Olympics. The months that followed saw him train under a series of pain relieving injections and medicate himself in order to be fit enough to participate.

Given the severity of the injury, which should have required surgery, Angle overcame it to compete at Atlanta 1996. That, was an achievement in itself.

Angle competed in the 100kg freestyle wrestling category and progressed in the tournament, coming out on top in four matches before making to the final.

He faced Iranian Abbas Jadidi, who had a significant height and reach advantage. It was a stalemate of a final, finishing 1-1 and going to the judge's scorecards.

Ultimately Angle had his hand raised, and was an Olympic champion. After spending most of his Olympic preparation in a neck brace, it was a remarkable achievement.

WWE boss Vince McMahon was sold on Angle's story and persona, and offered him a 10-year contract after his Olympic victory.

So 25 years on, it's unlikely we'll ever see something so bizarre in an Olympic games. A career ending injury turned into an Olympic gold medal. Crazy, crazy stuff.

See Also: What Is Raven Saunders' X Gesture And Why The IOC Are Investigating It 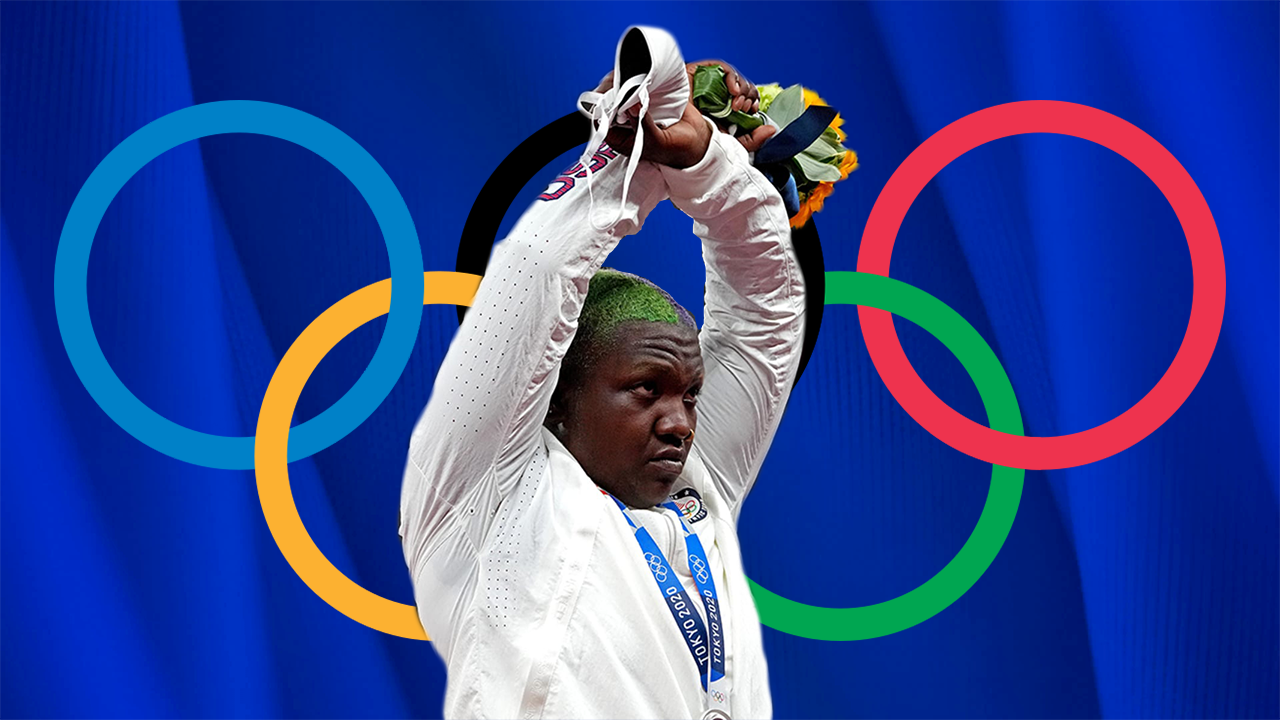