It's a time-honoured tradition for a celebrity or politician to throw a ceremonial first pitch of a baseball game. Drimnagh publican Conor McGregor was in Chicago last night to watch the Cubs take on the Minnesota Twins at Wrigley Field, and naturally, was asked to do the honours.

McGregor has struggled with sports over past while and it went pretty bad for the southpaw last night: the ball basically ended up in Pittsburgh.

Considering McGregor's age and fitness, you can make the case that this is the worst opening pitch of all time. Conor McGregor may not have been raised playing baseball or rounders, but the concept of throwing a ball in a straight line is relatively straightforward. Attempting the pitch while wearing a tight-fitting suit was ill-advised.

We loved the close up on Cubs player Patrick Wisdom.

There is a theory among Twitter commenters that Conor McGregor flubbed this on purpose to rack up the video views, but as Friedmann - a pitching guru - points out, McGregor's head is facing the pitcher when he releases the ball. It's just that his mechanics are terrible.

Looking square at the target. 100% not on purpose. pic.twitter.com/oER4dyzdM8

McGregor will now have something to laugh about with rapper 50 Cent should they ever need an icebreaker ahead of a business meeting.

George W Bush of all people showed the world how its done in the days after 9/11 at Yankee Stadium. Look at the control and accuracy here from the then-Leader of the Free World.

This is not the first time Conor McGregor has embarassed himself on an American sporting pitch. His attempt at throwing an American football at a Dallas Cowboys game was roundly pilloried. He explained his poor throw, saying:

I just didn’t want to rip my custom baby blue billionaire blazer. That was all, y’all. Great job to the Cowboys today! It’s a Proper giddy up tonight in Dallas and I LOVE IT, see yous soon 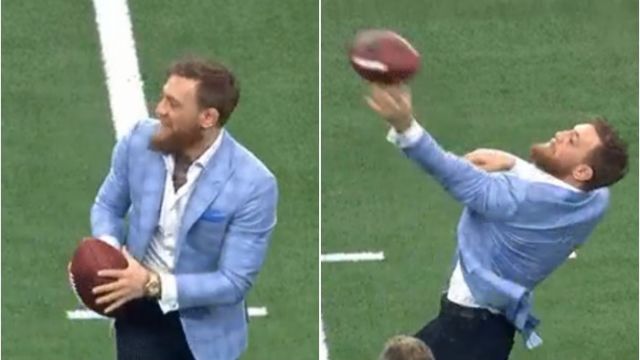 American Sports
1 day ago
By Jonathan Browne
It Might Have Been The Greatest Weekend In NFL Playoffs History
American Sports
1 week ago
By Jonathan Browne
This Year's Nickelodeon NFL Playoffs Takeover Was Surreal And Slimy
American Sports
3 weeks ago
By Eoin Harrington
Tributes Paid As NFL Legend John Madden Dies At 85
Popular on Balls
GAA
2 days ago
By PJ Browne
Insane Drama As Late TJ Reid Goal Sends Ballyhale Into All-Ireland Final
Rugby
1 day ago
By Colman Stanley
Yesterday Was Not The First Time Wayne Barnes Sent A Player Off For Getting Lippy
Rugby
22 hours ago
By Colman Stanley
Champions Cup Predictions And Permutations For The Irish Provinces
The Rewind
2 days ago
By Jonathan Byrne
The Definitive Ranking: Deli Items Ranked From Best To Worst