On Saturday, James McCourt sent supporters at the University Of Illinois' Memorial Stadium into raptures.

The 21-year-old kicked a 39-yard field goal which saw his Fighting Illini side defeat Wisconsin Badgers.

There is more interest to this story beyond it being the biggest upset of the college football season thus far: McCourt was born in Ireland. He and his family moved to the US in 2006.

"I grew up in Dartry Park in Dublin 6," he told the Irish media during a conference call on Wednesday.

I went to school in Ranelagh. I was there for four years up to second class.

I played rugby for Lansdowne and for Belvedere. I fell in love with rugby. I'm cousins with Garry Ringrose.

I moved over to South Florida, to Parkland, when I was eight. I came over because of my Dad’s work.

Having played rugby and soccer growing up, McCourt was more accustomed to kicking a ball than other kids his age. In middle school, he started playing tackle football and the team needed a kicker.

"I got a bit of coaching here and there," he explained, "the University of Illinois, they called me in my senior year and asked me if I wanted to come here and play for them. It was pretty unreal at the start." 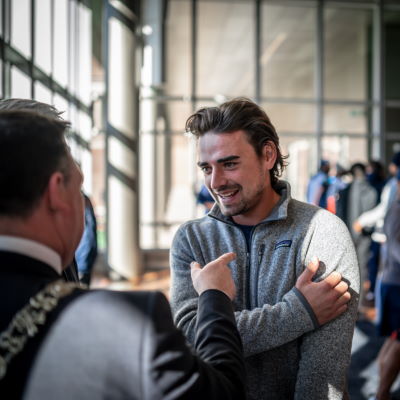 McCourt joined Illinois in 2016 and became their starting kicker this season after waiting in line behind current LA Chargers player Chase McLaughlin. Even before Saturday, McCourt had impressed with his boot. He landed a 57-yard, school record-equalling field goal last month.

"It was bonkers, it was nuts, it was definitely a scene," he said of the celebrations which erupted after his kick at the weekend.

"There was a dog pile in the middle of the field and I actually passed out underneath at the bottom with all the weight on top of me.

"I lost my breath and my eyes rolled back in my head for a minute. It took me a little while to actually realise myself what actually happened. I got lifted up and saw a bunch of insanely happy people who deserved this win.

"I've played that kick in my head a thousand times over. I do a lot of visualisation. It's something we work towards in practice all the time.

"All eyes are you and you could be the hero or the villain. You wouldn't be kicking at a high level if you didn't like the pressure."

McCourt said that he and Garry Ringrose are regularly in contact. The Ireland centre sent his congrats following Illinois' win on Saturday. McCourt added that he has not yet touched on Ireland's World Cup disappointment with his cousin.

Illinois are scheduled to play Nebraska in Dublin for the 2021 Aer Lingus College Football Classic. However, it's likely that McCourt will be finished with college football by then, perhaps having taken the next step in the sport.

"Obviously the NFL is something I do work for and I strive for," he said, "that’s the dream of everyone, and if the opportunity presents itself I’m definitely going to put everything I can towards that."

THE BIGGEST UPSET OF THE COLLEGE FOOTBALL SEASON pic.twitter.com/Y3pzBKTaBQ

The Universities of Illinois and Nebraska will travel to Dublin for the 2021 Aer Lingus College Football Classic in the Aviva Stadium. For more information and ticket packages for Notre Dame vs Navy in 2020 and Illinois vs Nebraska in 2021 please see collegefootballireland.com