Lesnar Vs Stone Cold, Elimination Chamber And Sheamus In TMNT In This Week's 'Low Blows' 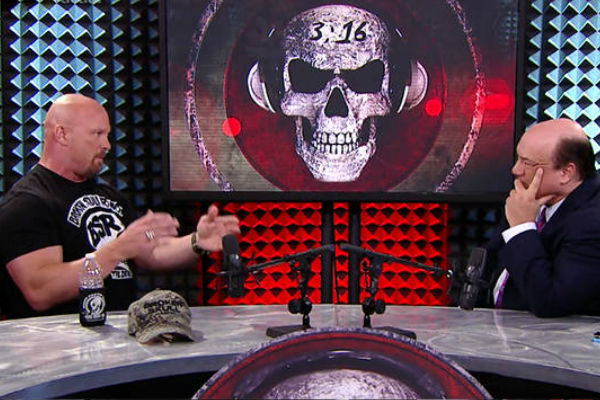 A crazy month for WWE and pro-wrestling continued this week, with WWE Elimination Chamber last Sunday seeing a massive upset as NXT Champion, Kevin Owens, pinned John Cena clean. The 'Low Blows' lads review the show in full with Rick playing devil's advocate to those claiming the match was a classic. The following night's Raw is also wrapped up in fast forward.

But the biggest news from the following night was an interview between Stone Cold Steve Austin and his former mentor Paul Heyman, that was highlighted when the two appeared to begin hype for an Austin/Brock Lesnar match at WrestleMania 32. But what are the odds of such a match happening?

Kevin Owens' former home, Ring of Honor, also shocked the world when they announced a move to the Destination America network, in what was news to the network's flagship show, TNA Impact Wrestling, and the wrestling world in general. What could the fallout of that move be? Plus what iconic children's TV character will our own Sheamus play in an upcoming movie?

Also on the show: Don gets nostalgic about Tough Enough series 1, with Low Blows Live 3 just one week away, the lads give a final preview of what everyone can expect that night for free, plus in the wake of the FIFA scandal, what figures in wrestling should be locked up for scandals over the years?

You can subscribe to 'Low Blows' on iTunes or all good podcasting apps and have each new episode delivered directly to your PC/smartphone as soon as it's released. Also follow the lads on Facebook, Twitter and Snapchat for updates on the go.