Kevin Beirne takes a look back at week five of the NFL.

Now that week five of the NFL season is behind us, Kevin Beirne looks at what we learned over the weekend:

1) The Falcons are in crisis mode 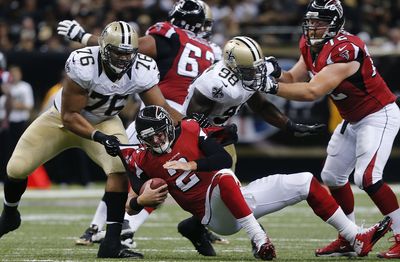 The New Orleans Saints are sitting pretty atop the NFC South with a perfect 5-0 record after their win over the Bears on Sunday. This is terrible news for the Atlanta Falcons, who lost at home to Geno Smith’s New York Jets on Monday night. The loss means that the Falcons have only won one game all year going into their bye week. For a team who had aspirations of a Superbowl, a 1-4 record simply isn’t good enough and without Julio Jones for the rest of the season, it will be very difficult for them to turn things around.

It seemed that the Falcons would take the lessons of last year’s playoffs and kick on to mount a run for the title this year. Although their season isn’t dead, it is in serious danger of being an absolute failure. They can only afford to lose two more games for the rest of the year if they want to stand any chance of making the playoffs. If they do make it to the postseason despite a 1-4 start, then they will be a team everyone will look to avoid.

Sunday night saw the Broncos and the Cowboys face off in what can only be described as a shootout. Despite throwing for over 500 yards and 5 TDs, Tony Romo still came out on the losing side against Peyton Manning after throwing a late interception. As is always the case with Romo, the focus has largely been on the one interception and not the fact that he led the Cowboys to 48 points against probably the best team in the AFC.

This game was a great example of Romo’s career and how he is perceived by the general public. Instead of being praised for hanging in against the Broncos, even when being down 35-20 at one point, Romo is being made into the viliian for throwing a late interception which lead to the winning Denver field goal. Romo will always be remembered as a choker, even if that’s a simplification of a much more complex career. Romo is much more talented than most people give him credit for and without him, the Cowboys would have been totally blown out on Sunday.

3) The Colts are the real deal 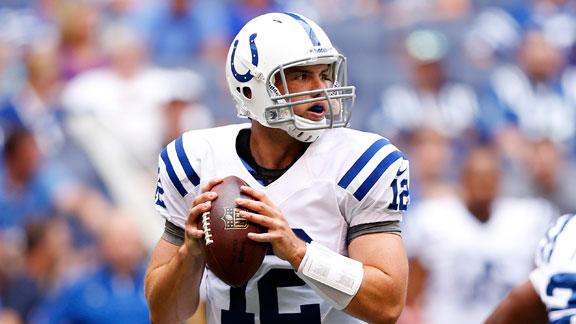 Andrew Luck and the Colts are on a roll after overcoming the previously undefeated Seahawks on Sunday. Many people were ready to write Indianpolis off after their week 2 loss to the Dolphins, but they are now top of the AFC South with a very respectable 4-1 record. If you’re not already considering Luck as one of the best quarterbacks in the league, then you’re not paying attention.

So far, he has lived up to the hype that comes with being a first overall pick who has to replace one of the all-time greats of the game. If he can stay healthy, then the Colts will be a contender for the next ten years at least. The AFC is lacking a clear second team behind the Broncos (who in week 6 take on Jacksonville with one of the biggest NFL spreads in history, +27), and the Colts could take advantage of that in the playoffs, although it is unlikely that Manning would be beaten by his former team.

Of the three unbeaten teams at this stage of the year, two of them had losing seasons last year. The Chiefs went from the worst record last season to the joint best record this year, while the Saints are already two wins shy of their total record for last season. The two things that these teams have in common is they have a different head coach than in 2012.

The Chiefs have made great strides under Andy Reid with largely the same team as last season, although the signing of Alex Smith from the 49ers in free agency has certainly helped them, as they struggled last season with Matt Cassel under centre. The Saints, meanwhile, are a completely different team with Sean Payton calling the shots. As ever, Drew Brees looks set to smash the record for most passing yards in a season.

5) The Lions have no offense without Calvin Johnson 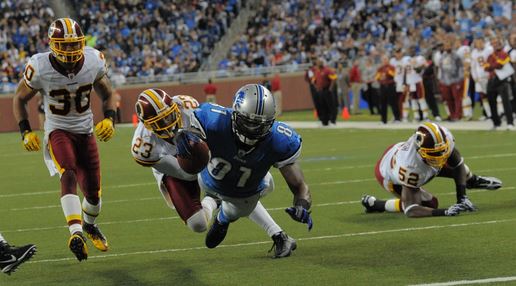 Detroit got off to a good start this season, as they jumped out to a 3-1 record from their first four games. Against the Packers this weekend, however, they didn’t have their main offensive threat in the form of Calvin Johnson. No one doubts Johnson’s talent, but it was unclear before this weekend just how important he was to Detroit’s offense.

As it turns out, Johnson was the entire Lions offense, as they only managed to put up 9 points on a very banged up Green Bay defence. Without his number one weapon, Stafford was exposed as an average quarterback. Even on plays when the ball doesn’t go his way, Johnson’s presence on the field gives the other Lions receivers the chance to make plays as he draws the focus of opposing teams. The Lions are going nowhere without a healthy Megatron.