In the fourth quarter of last night's NFL matchup between the Pittsburgh Steelers and the Chicago Bears, a strange and controversial moment occurred.

With the Bears trailing the Steelers by three points deep in the fourth quarter, Chicago appeared to make a massive stop when linebacker Cassius Marsh sacked Steelers QB Ben Roethlisberger on third down. However, referee Tony Corrente flagged Marsh for taunting after the play, giving Pittsburgh an automatic first down.

Marsh was stunned. However things got weirder when TV footage showed Corrente appearing to stick out his rear end into the path of the Chicago linebacker, and cause contact between himself and Marsh, just before he threw the flag.

This left many fans are wondering whether Corrente was trying to get Marsh into more serious trouble for making contact with a referee.

Here’s video of “taunting” on Cassius Marsh. What a joke. Not a word was said. Looking at the sideline.

And ref LEANED in!! pic.twitter.com/iSthDECHBK

This was a fun and cool celebration after a big moment of a MNF game, and one of the biggest moments of Cassius Marsh’s career. It should NOT have drawn a flag. Let players have fun and talk smack. They’re not soft. And this is coming from a Steelers fan. pic.twitter.com/V13q61YW7H

In his post-game interview Marsh was adamant that he wasn’t taunting saying that, “I think it’s pretty clear to everybody who saw it that I wasn’t taunting.”

“All like you know I’ve been doing this celebration my whole career.”

The celebration that Marsh is referring to is the roundhouse kick you can see in the video of the incident.

Marsh also spoke of the contact Corrente made with him and called it “incredibly inappropriate.”

#Bears LB Cassius Marsh, who was called for taunting late in the 4th quarter, says he didn’t say anything towards the #Steelers bench to warrant a penalty.

Also says the ref hip-checked him and if it was the other way around he would’ve been ejected. pic.twitter.com/TpSIJjH625

The Steelers would end up kicking a field goal with that possession, and as they won the game by two points. it could be argued that this call cost the Bears the game.

Comments from referee Tony Corrente that he made to a reporter after the game, sum up his view of the incident.

“Keep in mind that taunting is a point of emphasis this year.”

“With that said, I saw the player, after he made a big play, run toward the bench area of the Pittsburgh Steelers and posture in such a way that I felt he was taunting them.”

“That had nothing to do with it (when referring to the contact with Marsh), it was the taunting aspect.

The incident had fans in uproar, not only for the contact issue but for the flag for the apparent taunting from Marsh.

See some of the reaction below.

ON THE KARATE KICK?

that's the worst call of the season
wow is that horrible

The Bears just lost on perhaps the worst taunting penalty of all time. pic.twitter.com/uS7IxpXlIL

Facts!!!! That’s was absurd. That player if the show was on the other foot would have been thrown out the game, suspended, fined and depending on the player possibly CUT from the team. 🤦🏾‍♂️ https://t.co/72n3ZlmWg0

Doesn’t give a shit where that flag lands too busy taunting the player he called for taunting pic.twitter.com/Egk2EMwIl9

Tell me with a straight face that Tony Corente doesn’t back into Cassius Marsh intentionally. You can’t. He should be suspended for that and his brutal officiating tonight. pic.twitter.com/2hfW8ygeSG 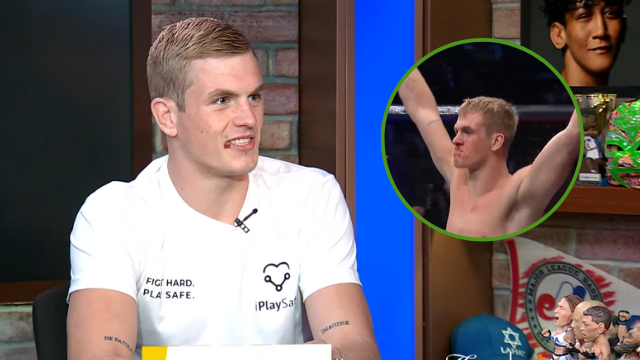