For fans of professional wrestling, the 30 man over-the-top-rope event holds many great memories throughout most of our childhoods, from Triple H returning from his quad injury to win the 2002 Rumble all the way back to Bret Hart and Lex Luger eliminating each other at the same time and being crowned co-winners in 1994.

But for me, and many, many others, the 1992 Royal Rumble will forever be the one that takes beating and it's largely down to one man: "Nature Boy" Ric Flair.

30 years ago today, Flair was at the heart of what many believe to be the greatest Rumble of all time.

Flair had been brought into the then-WWF by the late, great Bobby "The Brain" Heenan (more on him later), who proclaimed him "The Real World's Champion" and Flair even had the WCW belt with him! When Flair got involved in the WWF title picture in late 1991 and cost Hogan the title against a VERY young Undertaker, the title ended up being vacant heading into the 1992 Royal Rumble.

So as if things weren't exciting enough coming home from primary school as a seven year old in 1992 knowing a freshly video taped Royal Rumble was waiting for you to watch, you knew the winner of the Rumble was going to be the new WWF champion!

The 1992 Royal Rumble is heralded by many fans and experts alike as the greatest Royal Rumble event of all time and it is all down to two performances. Ric Flair in the ring and Bobby Heenan on commentary. Why? Well, the undercard is a complete throwaway, it's almost non existent, nobody talks about it because nobody cares!

It features the New Foundation (a checkered Jim Neidhart and Owen Hart) beating the Orient Express, Roddy Piper beat the Mountie for the Intercontinental Title, the Beverly Brothers beat the Bushwhackers and the Natural Disasters beat the Legion of Doom by countout. I've seen this show more times than I care to admit and I still had to google those results, it's so forgettable.

Step up Misters Flair and Heenan. Flair draws a seemingly disastrous number 3 and The Brain is already tearing his hair out. Mr Perfect had taken over from Bobby as Ric Flair's manager, but Heenan was still an "advisor" and played up the idea that he had wagered money on the "Nature Boy" winning it all. Gorilla Monsoon is an excellent foil as well. "Will you stop?!"

Flair is at his very best, at least in my lifetime, during this whole thing. I remember as a kid watching the end as it happened with my uncle and my Dad in the room. My father, who refers to wrestling simply as "them fellas jumping around in their underpants", was fully sucked in by Flair's performance. All the while Bobby Heenan begged and pleaded with everyone in the ring, continually insisting that things were "not fair to Flair!"

As Flair was on his knees begging the babyfaces not to hit him my father was screaming at the TV: "Look at him! He's begging, he can't even fight!" before Flair would poke him in the eye. I loved Flair, even then as a 7 year old, I just couldn't admit it because I didn't want my father to hear me but as Flair won the match and disappeared backstage to be presented with the belt, I remember his interview as if it was yesterday.

Surrounded by Mr Perfect and a jovial Bobby The Brain, Flair looked directly into the camera, breaking the fourth wall, as if he was speaking directly to seven year old me and said:

I'm gonna tell you all, with a tear in my eye. This is the greatest moment in my life.

The Rockers sucked me in to this weird world of Sports Entertainment, the shock I felt when Shawn Michaels tossed Marty Jannetty threw the barbershop window made me a fan, but Ric Flair and the 1992 Royal Rumble "with a tear in my eye" made me a fan for life.

We at Balls.ie made a video summarising the 5 best WWE Royal Rumble events on a whole of all time, the undercard made sure that this one didn't quite hit the number 1 spot, but it is in there. See if your favourite made the list:

SEE ALSO: 10 Signs That A Wrestling Fan Lived In Your House During The WWE Attitude Era 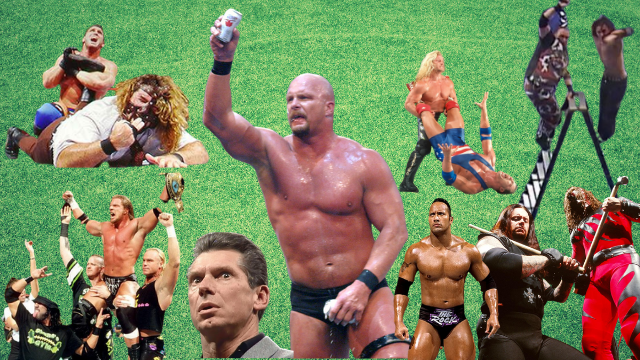