Seth Rollins Was Attacked By A Crazed Fan On WWE RAW

Seth Rollins was shockingly attacked by a fan who jumped a barricade last night on RAW.

The former WWE champion had been in the ring celebrating his Survivor Series victory the night before. He was part of Team Raw's success over Team Smackdown in the annual battle of the brands at the event.

But before he finished, Finn Balor came out to interrupt him. A brawl began with Rollins getting the better of the Bray native.

On his way backstage, a fan ran from the side of the walkway and tackled Rollins to the ground. It was caught for a brief couple of seconds on TV but WWE quickly cut to another angle as security and referees intervened.

Plenty of fan footage has emerged. The fan in question did his best spear impression and hit Seth Rollins with something even Goldberg would be proud of.

It wasn't the only incident involving the Brooklyn crowd last night as several wrestlers had an altercation after a fan said something. The fan was ejected from the building to round off the weird night for WWE.

More weirdness from the crowd as the guy in blue gets ejected. No idea what was said, but Montez Ford waved him off with both MVP and Sami Zayn getting animated. pic.twitter.com/t3slCIs4ul

This is just the latest in the line of fan altercations at sporting events recently. Ever since full crowds have returned to events the fans seem a bit more rowdy and are getting involved. Just in the rugby alone there has been pitch invaders and pranks pulled by Jarvo69 that have disrupted proceedings. It will surely have to stop before something bad happens. 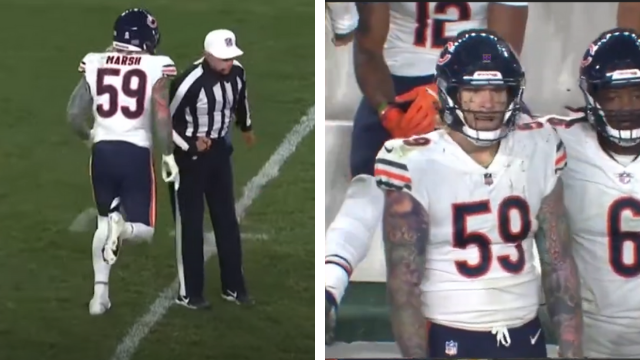 American Sports
2 weeks ago
By Colman Stanley
Two Irish-Born Players Will Be At NFL Training Camps As They Aim To Make History
American Sports
1 month ago
By Jonathan Browne
5 Things To Expect From WrestleMania 38 This Weekend
American Sports
1 month ago
By Jonathan Browne
5 Times Footballers Mixed It Up With Pro Wrestlers
Popular on Balls
Football
1 day ago
By Eoin Harrington
'Ronaldo Is A Cod' - Remembering Eamon Dunphy's Infamous 2008 Rant
GAA
16 hours ago
By PJ Browne
The Draw Has Been Made For Tailteann Cup Opening Rounds
GAA
1 day ago
By PJ Browne
Donal Óg Cusack Defends Dublin Hurlers After John Mullane Criticism
The Rewind
2 days ago
By Eoin Harrington
Watch: Brilliant Dermot Morgan Dublin Segment From 'The Travel Show' Resurfaces