The Top 10 Moments From The Wrestlemania Weekend

It’s time to play the game once more…“sports entertainments” biggest show of the year took place over two nights on the weekend, at the stadium of Super Bowl winners Tampa Bay Buccaneers. (Raymond James Stadium in Florida).

Here are my top 10 moments (in no particular order) from the showcase of the immortals, which believe it or not featured Hulk Hogan as a co-host, the first ever rain delay in Wrestlemania history, a Youtuber eating a stunner, a Latin hip-hop superstar wrestling, a live crowd of just over 25k each night, and most importantly…… an Irish VICTORY!

And lads…I know it’s scripted, theatrical, and pre-determined, in the same way I don’t expect King Kong and Godzilla to be tearing up the streets of Mullingar.

All that said, here were my ten favourite moments.

1. Sheamus Wins The US Title

Sheamus (real name Stephen Farrelly) was reported to be on the verge of retirement in recent years due to persistent neck injuries and a bout of cervical spinal stenosis, but gladly it appears that won’t be happening anytime soon as he’s been brilliant and better than ever during the pandemic era and deservedly got another Mania moment.

Make sure to check out the finish to this match where Sheamus brutally and beautifully nails Riddle mid-air with his patented Brogue Kick, that legitimately made the former UFC man bleed. (Sheamus a shoe-in for WWE Hall Of Fame some day, see what I did there)

Sheamus with a picture perfect Brouge Kick what a finish #WrestleMania pic.twitter.com/VOnYyIVjsu

When you’re a celebrity, it can be ill-advised to get into a WWE ring, and Youtube star Logan Paul found that out the hard way on Sunday night.

None of his nearly 23 million Youtube subscribers could prevent him getting a stunner from Kevin Owens, (Owens inheriting the move from his childhood hero Stone Cold Steve Austin) after Logan got in the ring after Owen’s victory over Sami Zayn.

Logan could have done with the help of his brother Jake Paul, who is scheduled to fight former MMA fighter Ben Askren in a boxing match this Saturday.

I almost cried when I heard the fans chanting my name. I have tried my absolute best to show them just how much this year on my own has driven me to be better. Thank you to everyone, and I hope you have an amazing time back at the show. #WrestleMania pic.twitter.com/OvVAgBIZ0p

It was great to see just over 25,000 fans in attendance (WWE figures) each night of Wrestlemania which greatly helps with the atmosphere and gave us a brief taste of life before Covid.
Hopefully we hear of no big outbreaks linked to this outdoor event and crowds can start to return more regularly.

Wrestling, Football, GAA, Rugby: they're not the same without fans and the performers and athletes at Wrestlemania greatly appreciated the return of fans for the first time in over a year.

Bad Bunny put on a SHOW at #WrestleMania

To be honest when hip-hop artist Bad Bunny first appeared on WWE shows a few months back I had no clue who he was. However I have since learned his songs have billions of streams on Spotify and billions of views on Youtube, and that he is a superstar especially in Latin America.

The Bunny has a few strings to his proverbial bow and he made his in ring debut at Wrestlemania teaming up with Damien Priest to successfully defeat The Miz and John Morrison.
As celebrity in ring performances go, this is right up there, Bunny’s passion for wrestling and dedication to get himself ring ready serving him well, as he gave a very credible showing, bravo! (check out Bad Bunny Canadian Destroyer)

Roman Reigns and Edge spearing each other.

What a backstory for this brilliant triple threat that main evented Night 2.

WWE Legend Edge, to the day on Sunday, had retired from wrestling 10 years previous due to injury before making a sensational comeback at 2020’s Royal Rumble. Daniel Bryan had to retire due to injury in 2016 but he dramatically returned to the fold in 2018 after getting the all clear. And Roman Reigns who has battled past Leaukemia to return to be the face of the company, an amazing comeback theme with Roman retaining his title on Sunday after pinning both men at the same time, to the delight of his personal counsel Paul Heyman.

6. Shane McMahon Falling Off A Cage

HE THREW SHANE MCMAHON OFF THE STEEL CAGE 🤯

It wouldn’t be a Wrestlemania if Shane McMahon didn’t endanger his life and fall off something really high up in the air.

Thankfully Shane (son of WWE Chairman and CEO Vince McMahon) decided to not fall off the giant pirate ship that was part of the amazing Wrestlemania stage. Instead Shane was tossed like a rag-doll by 7 foot plus Braun Strowman from the top of the cage to the canvas, hopefully the end of the road of a feud which basically revolved around Shane calling Braun dumb every week.

Do not adjust your screen, yes you read that correctly.

This match highlights the often ridiculousness of WWE as Intercontinental Champion Big E battled Apollo Crews (Apollo deciding to start speaking with a Nigerian accent a few months back) in a Nigerian Drum Fight.

What is a Nigerian Drum Fight I hear you ask? Basically a hardcore no-DQ match with drums around the ring, no drums were harmed during this match which made it even dafter! Apollo’s new Nigerian character appears to be doing him good however as he picked up the victory and walked away with the gold after an interference from new buddy Babatunde Aiyegbusi.

Look at Sasha Banks struggling to hide her joy while selling at ringside as Bianca Belair celebrated her victory in the ring. The smile says it all.

On Night 1 of Wrestlemania on Saturday, the main event was between Sasha Banks and Bianca Belair, making history as only the second women’s match to ever headline a Wrestlemania after Becky Lynch’s historic triple threat in 2019.

Sasha Banks, first cousin to Snoop Dogg and an on-screen character in Season 2 of Disney’s “The Mandalorian”, will go down as one of the greatest women’s wrestlers of all time and she is still in her twenties.

However on this night, Bianca Belair became a star in arguably the best match of the weekend. The supremely gifted athlete captured the Smackdown Womens Title and the genuine emotion on her face at the finish was a highlight.

24-year-old Aussie Rhea Ripley (yes just 24) captured the Raw Women’s Title on Night 2, defeating the legendary Asuka, a fantastic moment for the Adelaide powerhouse, making amends for her defeat against Charlotte last year, what a future both these women have.

9. Don’t blame it on the Weatherman

Vince McMahon has a lot of power but unfortunately Mother Nature remains undefeated.

On Night One of Wrestlemania, after Vince welcomed fans back with an impassioned speech, we had the first rain delay in Wrestlemania history.

The shows first match was delayed 30 mins due to a thunderstorm passing through Tampa which meant WWE had to improvise to kill some time. The performers did Vince proud as they did improvised interviews and promos backstage (New Irish interviewer Kevin Patrick Egan featuring prominently) until the weather calmed, inadvertently proving that WWE would be so much better without scripted dialogue and to instead give the wrestlers more trust and freedom.

CESARO GOT HIS FIRST SINGLES WIN AT MANIA!

MOTN so far, Rollins and Cesaro put on a banger. #WrestleMania pic.twitter.com/kyxmTZnjLq

Swiss star Cesaro, a ten year veteran of WWE, had his first Wrestlemania singles match on Night 1 against Seth Rollins (great wrestler and Becky Lynch’s fiancé). A well overdue match for the uber talented Cesaro and he sealed it with an impressive win, the king of swing swinging Seth Rollins around the ring at least 30 times in an incredible feat of strength and balance, (including a swing with no hands) check it out on Youtube and also check out when he swung The Great Khali a few years back.

Any casual WWE fans/non WWE fans can you please watch The Fiend vs Randy Orton and let me know what you think! Just because the Undertaker is gone doesn’t mean the super-natural stuff stopped, brief synopsis: Zombie man returns from being burned alive with Harley Quinn like friend, Zombie man gets distracted by what looks like petrol pouring from friends face, Orton RKO, 1-2-3….WTF 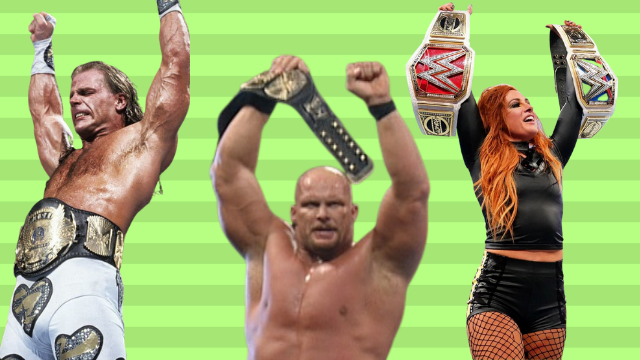