Tom Brady Is Back In Super Bowl: How The Hell Does This Keep Happening?

The career of Tom Brady continues to astound and amaze. At the tender age of 43, the Tampa Bay Buccaneers quarterback is heading back to the biggest event on the American sporting calendar, after Tampa shocked Green Bay 31-26 last night. Outside of Jesus Christ's three big seasons around Nazareth two thousand year ago, we're hard pressed to find a better precedent for miracle working.

Brady will play in his tenth Super Bowl on Sunday week. It will be his third Super Bowl since turning 40. In his 21 seasons, he had reached the Super Bowl 10 times.  This kind of thing is neither normal nor natural. Brady was drafted by the New England Patriots in the year 2000.

His achievements with Tampa Bay are right up there with anything he achieved with New England. To decamp to Glazer country after twenty seasons with Bill Belichick and lead Tampa Bay to a Super Bowl as fifth seeds in the NFC is downright insane.

Brady threw three interceptions last night but have no doubt, Tampa Bay would be nowhere near the Lombardi Trophy if Brady hadn't decided to part with New England and head to down the Gulf Coast. The Bucs are one of the NFL's sorriest franchises but Brady has instilled in them the megaconfidence of the GOAT. After a ho-hum start to the season, Brady has discovered ridiculous form in mid-November. Tampa travelled to New Orleans and Green Bay in this playoffs, and won against teams with better records. He was lethal in the first half of last night's game and clinical when the game was on the line.

The greatest American sports story of our time keeps on writing itself.

Just absurd what Tom Brady has accomplished in his career.

Undisputed greatest of all time.

Not even remotely debatable.

Tom Brady and Gronk ran it back 😂 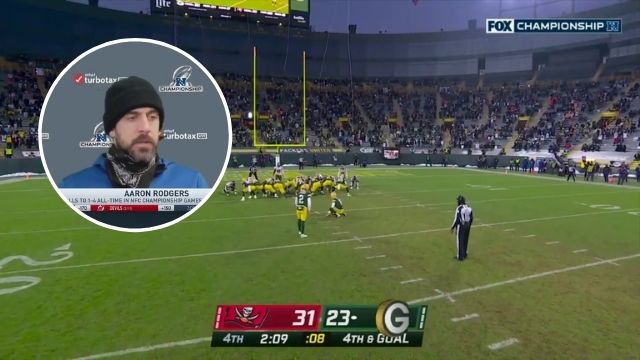