In certain quarters of American life, last Wednesday's ransacking of the US Capitol building by supporters of the current American president was a true eureka moment. The sight of thugs smashing through the windows of one of America's most esteemed government buildings to pilfer the place made a lot of ordinary, decent Americans sit up and suddenly reconsider their support for Donald Trump.

The four-year long flirtation with white supremacists, the imprisoning of children at the border, the vilifying of people of colour and migrants, the undercutting of American democracy and indeed the concept of reality: acceptable. It seems to have taken the sight of something as offensive as Confederate flag being traipsed through the literal corridors of American democracy for the penny to drop.

The confederate flag, a symbol of white supremacy and hate, has never been inside the U.S. Capitol building. Ever. Not even during the Civil War.

Unfortunately it was far too late.

The recriminations have been rolling in ever since. And we're not talking about impeachment. The PGA Tour announced that that 2022 PGA Championship will not take place at the Trump National course in Bedminster NJ. Yesterday, New England Patriots coach Bill Belichick said he'd be turning down the Presidential Medal of Freedom that was set to be awarded to him. In a statement, he wrote 'the tragic events of last week occurred and the decision has been made not to move forward with the award'.

These are not trifling matters. American political reporters have stated the PGA slight made Trump far angrier than any of this talk of impeachment.

He’s angry about impeachment, people who have spoken to him say. But the reaction to the PGA decision was different order of magnitude.

From the the WWE to the PGA Tour, Trump has used sport to advance his brand and his business, and it will be the same once he leaves the White House. Trump will quickly move on from the trappings of US political power, but he desperately craves legitimacy from the sporting world.

Here's the problem though. Last Wednesday's antics did not come out of the blue. The riot at the Capitol was the culmination of more than four years of Trump corroding the national discourse. The PGA Tour and the New England Patriots coach had ample opportunity to distance themselves from the American president over the past four years. Instead they cosied up to him and basked in his orange aura.

The PGA Tour is one of the great bastions of Trumpism in American life. Many of golf's best players enjoyed a quiet round with Trump over the past year. Writing Trump out of future PGA tour events will not erase the recent past, where the sitting President served as a de facto czar of American golf. It was both surreal, but not surprising, that Gary Player was a guest of Trump at the White House the morning after the Capitol riot.

As for Belichick, he has permanently blotted his reputation as one of the NFL's greatest coaches by his craven courting of Trump.

Belichick famously penned a love letter to Trump on the eve of the 2016 Presidential election.

He was also on hand to present the Orange One with a commemorative Patriots jersey at the White House after the Patriots won the Super Bowl in 2018, months after Trump legitimised a far right rally in Charlottesville that left a woman dead.

In his statement, Belichick revealed he was happy to accept the award before last week's events in Washington, and performs a feat of linguistic aerobics in turning the award down without ever criticising Trump.

Recently I was offered the opportunity to receive the Presidential Medal of Freedom, which I was flattered by out of respect for what the honor represents and admiration for prior recipients. Subsequently, the tragic events of last week occurred and the decision has been made not to move forward with the award.

Quite like social media companies finally discovering their spine in dealing with Trump the minute the 2020 election was certified, the likes of the PGA Tour and Belichick have experienced a sudden surge of moral courage after spending the past four enabling him.

What's that sound you hear? It's the scurrying of rats, fleeing battleship Trump as it sinks into the depths of the Potomac. Unfortunately the damage can't be undone.

SEE ALSO: Thanks To Donald Trump, I Can No Longer Support The New England Patriots 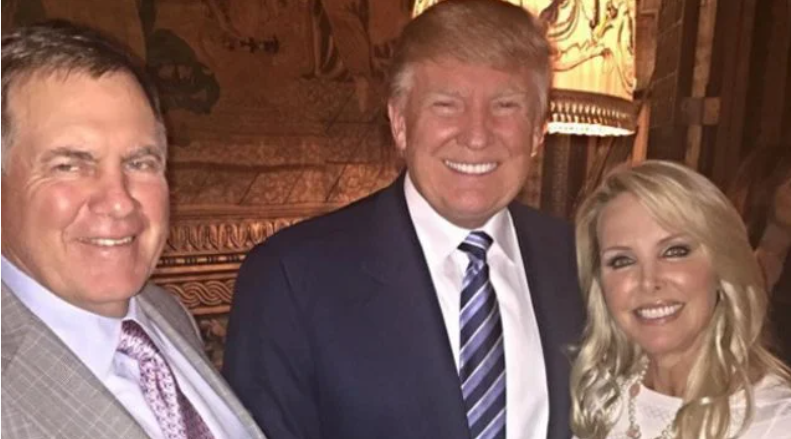