Was This 2002 Triple H Moment The Greatest WWE Return Ever?

The 2020 Royal Rumble takes place this Sunday, 26 January. As we look forward to it we thought we'd look back at one of our favourite mosts from Royal Rumbles past.

Was the 2002 Royal Rumble the best ever? No. Was the entire card loaded with great matches? Not really.

But within about 10 seconds of watching Triple H's Raw return, which happened just a few weeks prior to winning the rumble, you'll be reminded about why this period deserves its place in the pantheon of batshit wrestling moments from your childhood.

What was the backstory?

2002 was prime 90s kid wrestling nirvana. The invasion angle had just finished after WWE beat the Alliance at Survivor Series 2001. Looking back at that whole storyline now, it was actually pretty weak, given the absence of WCW's and ECW's biggest stars but when you were a kid this shit was the bee's knees.

One notable absentee from the entire storyline was Triple H. He had torn his quad off the bone in a tag team match in May of that year and there were fears that his career might be over. However, The Game showed incredible powers of recovery to make his return to Raw in early January, just weeks before the 2002 Royal Rumble.

As if I, an impressionable young Irish lad, couldn't have been any more excitable, the WWE decided to build up to Triple H's return by releasing promos of him hitting people with chairs and other such shenanigans, set to the music of U2's 'Beautiful Day'. This return was going to undoubtedly be the biggest moment in our young lives.

Unfortunately I did not have Sky so I had to make appropriate arrangements to be able to witness this incredible occasion. A young lad in school with access to the right channels was sourced and an arrangement was reached whereby he would record the episode of Raw and bring it in once he'd watched it.

This meant I had to wait until Wednesday to get my hands on the tape but folks, it was so bloody worth it.

“This is as loud as any sustained roar that I have ever heard in Madison Square Garden!”

The Game's music hit and the place erupted. What emerged from behind that curtain was a creature simply too large to be a mere mortal. Triple H had crossed to the other side during his time away from the ring. He was not a man but more a God.

Denim jackets could not fit his body. He had no option but to rip the sleeves off so he could fit his treetrunk arms into one.

Of course this sleeveless denim jacket was worn over a full length leather jacket because ... well because he's The Game goddammit. 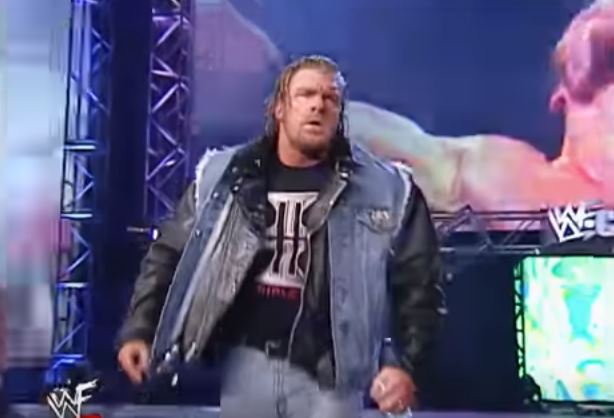 "I AM THE GAME AND YOU CAN BET YOUR ASS I'M BACK" roared Triple H before he was so rudely interrupted by Kurt Angle. For kids back then, Angle was literally the most hated person in the history of the world. Worse than Hitler. You wouldn't catch Hitler coming in and spoiling Triple H's big return.

Both men declared they would enter that month's Royal Rumble before The Game delivered one hell of a pedigree to Angle.

Just 13 days later Triple H would have to overcome Angle again when they outlasted all the other competitors in the Rumble. Angle thought he had Helmsley eliminated but surprise! He hung onto the rope, heaved himself back into the ring and booked his place in the main event of Wrestlemania.

The stage was set for an incredible clash between Triple H and the first ever Undispited Champion, Chris Jericho. This was not just about the title, when The Game tore his quad it was while trying to break up a Walls of Jericho on his tag partner, Stone Cold Austin.

Won't somebody think of the symbolism!?

We had the usual buildup to the match. You know yourself ... the break-up of Triple H's onscreen marriage, a Stephanie McMahon fake pregnancy ... nothing out of the ordinary. And then we had the pièce de résistance, the icing on the cake.

At Wrestlemania Triple H won the Undisputed Championship and the remarkable comeback was complete.

American Sports
1 week ago
By Gary Connaughton
Sheamus Reveals He Once Had Backstage Fight With WWE Star Over Rent Money
American Sports
2 weeks ago
By Ryan Carrick
Is AEW A Real Alternative To The WWE?
Previous Next

Gaming
4 days ago
By Ryan Carrick
The Latest WWE Video Game Looks Very Different
American Sports
1 week ago
By Gary Connaughton
Sheamus Reveals He Once Had Backstage Fight With WWE Star Over Rent Money
American Sports
2 weeks ago
By Ryan Carrick
Is AEW A Real Alternative To The WWE?
Popular on Balls
Football
10 hours ago
By Gary Connaughton
AFTV's Reaction To Arsenal Howler Is Everything You Hoped It Would Be
15