Undertaker's Joe Rogan Interview Is Another Smear On His WWE Legacy

They say 'you should never meet your heroes'. For wrestling fans who have idolised The Undertaker throughout his career, the idea of ever meeting Mark Calaway might seem less appealing nowadays.

In a period where WWE's weekly product has become something of a laughing stock among longtime wrestling fans, the best content that the company now produces comes from behind the curtain. The WWE Network's production of backstage and reality-based documentaries has been excellent, offering a far more compelling picture of the company's main protagonists than the struggling creative team has managed to do on Raw or Smackdown over the last couple of years.

One of the most anticipated WWE documentaries in 2020 was The Last Ride, a series that chronicled The Undertaker's final years in the company as he struggled to come to terms with his retirement, which he announced in the final episode. This was seen as wrestling's answer to Michael Jordan's The Last Dance and it gave wrestling fans a rare glimpse at Mark Calaway, the man behind WWE's most iconic character, who for years had avoided public appearances and gone to great lengths to protect his on-screen persona. Now in the months since his retirement, Calaway has opened himself up to the public far more than he ever did during his entire 30 year WWE career.

During his recent appearance on The Joe Rogan Experience, Calaway ruffled some feathers in the wrestling industry with comments about how the current WWE locker room compares with the era which he came from.

You go into a dressing room nowadays and it’s a lot different. I remember walking into my first real dressing room and all I saw were some crusty fucking men. Half of them had guns and knives in their bags. Shit got handled back then. Now you walk in, there’s guys playing video games and making sure they look pretty. It’s evolution, I guess. I don’t know what it is, but I just prefer those eras, man. I liked when men were men.

A huge part of The Undertaker's mystique was based on the universal respect that he commands among his peers. Having come from an era plagued by paranoia and backstage politics, it's striking how difficult it is to find a wrestler who has anything but respectful words to say about The Undertaker and his presence backstage. He has been the ultimate locker-room leader in WWE throughout his career and continues to be a mentor for much of the current roster, so his words carry huge weight.

Despite his apparent wisdom, it seems as though Calaway has failed to grasp the idea that the environment he sees in the current WWE locker room is a much healthier and safer one than the "Wild West" he remembers from the 80s and 90s. There is a long list of wrestlers from his generation who died prematurely as a result of drug abuse, some of whom he even referenced in the conversation with Joe Rogan. WWE has taken a number of positive steps over the past decade to improve the health and safety of their performers, so the death statistics of this generation's wrestlers are unlikely to be anything near as tragic as they were in the past, when 'men were men' according to Calaway.

Not many topics we didn’t speak about! Great talk! https://t.co/ggsifiCLIa

He spent most of the near three hour podcast describing some horrific injuries he has had to endure to maintain his career for so long. Shattered eye sockets, multiple hip surgeries, a shoulder injury that baffled one of the most well-renowned surgeons in American sports - any of which alone could have been career-ending and life-altering. Calaway is incredibly lucky to have remained physically active into his mid-50s. Yet, instead of recognising the problems that WWE's historic medical failings and brutal touring schedule have caused him over the years, he wears the injury list like a badge of honour. If only more of his peers were still alive so they could bask in the glory of 'manliness'.

The product has changed so much. It's kind of soft. I'll probably piss a lot of people off but they need to hear it. It is what it is. To the young guys, it's probably "he's a bitter old guy". I'm not bitter, I did my time. I'm good. I walked away when I wanted to walk away. I just think the product is a little soft. There are guys here and there that have an edge to them. But there's too much pretty, not enough substance right now.

In his criticisms of the current WWE product, Calaway certainly has a point. WWE is now PG and has been since 2009, so the edgy content that Undertaker was a part of during the heyday of the late 90s and early 2000s is no longer possible. But this decision comes from the top, so it's unfair to paint the current crop of performers as 'soft' because of it.

From an in-ring standpoint, modern WWE boasts the best roster it has ever had - full of incredible performers with a far higher level of athleticism and work-rate than any generation in the past. Many current stars compete with an extremely physical in-ring style and work a grueling schedule, so to label them as 'soft' because some have chosen to dedicate their spare time to video games instead of an addiction to prescription pills doesn't make any sense.

Modern WWE continues to live in the shadow of 'The Attitude Era', but the fault lies with Vince McMahon and his creative team more so than the talents, who could do without an icon of the industry going on one of the biggest podcasts in the world and making them look bad. If The Undertaker is intent on discrediting the industry he helped establish, then appearing in 'The Last Ride' wearing a 'Blue Lives Matter' t-shirt in the middle of 2020 was probably enough, he didn't need to open his mouth on Joe Rogan.

Interesting how the Undertaker is wearing a Blue Lives Matter shirt here when in the 90s he had a very different attitude... pic.twitter.com/72A0NvUPtn 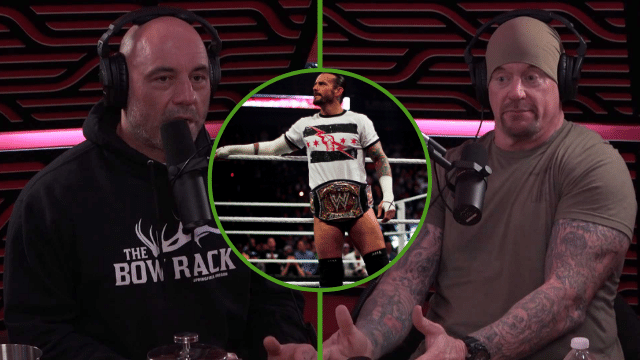