Thomas Barr is ready to forget all about his poor 2017 after nabbing his first win of the year at the AIT International in Athlone on Thursday, beating Portugal's Ricardo Do Santos to the punch in a rousing come-from-behind victory on home soil.

The Irish Olympian was ahead of the chasing after the first lap of the men's 400m sprint, but let go of the lead down the back straight before pulling ahead of Dos Santos once more as they closed in on the finish line.

Afterwards the Waterford man spoke to RTE, saying he was "really thrilled" with the result and praised the atmosphere created by the crowd.

That was brilliant. You know what, I've been looking forward to that because I don't have any more 400s in the indoors lined up. (It feels good) to come out here and run a really good 400. I stayed relaxed, I let Dos Santos go in ahead of me on the back straight in the second lap and I knew that I still had plenty in me if I needed to catch him. Yeah, I'm delighted with that.

Barr's performance, which was just 0.07 seconds off his personal best and is hopefully a sign of better things to come from him following a poor campaign last year by his own high standards. Although he finished third in his Diamond League debut in June, he had to withdraw from the semi-finals of the World Championships in August due to a vomiting bug. The athlete, still out of breath in his post-race interview, was philosophical about it all.

Sport is about having 99 bad days to have that one good day, and it is one hundred percent worth it for that one good day. But it's all about balance. Sure, last year didn't really go to plan, but I've had so many ups, so many good years, that it was really just a balance.

That gave me a bit of a hunger again to come into this year in the best shape I can, and it gave me that motivation to come back training off my break, whereas sometimes I would have been very reluctant to come back into training, but it's gone really well.

Despite the lackluster times last year, Barr believes he was "running faster than ever" and yesterday's result is just the kick-start he needed heading into the outdoor campaign.

I absolutely burnt myself out there on the track this evening, but I'm in really good stead now and ready to go back into this stint of training to get ready for outdoors.

Thomas Barr wasn't the only Irishman to leave Athlone happy last night, as John Travers became the first Irishman to run a sub-four-minute mile indoors in Ireland after finishing third in 3:59.40. 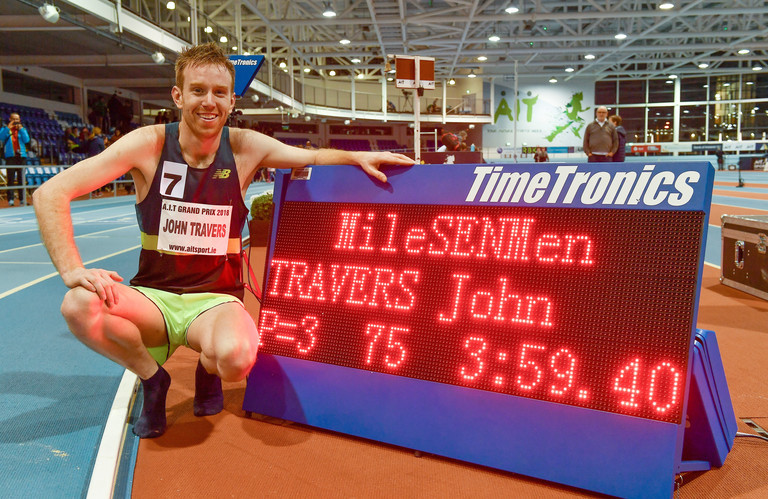 Also: Chrissy McKaigue Shares A Letter That Will Mean More To Him Than Any Medal