Tributes have poured in from the world of athletics for the sadly-departed Jerry Kiernan. They all suggest that Kiernan was exactly the same philosopher-runner he appeared to be when providing punditry.

No tribute to Kiernan was as personal and as powerful as Ciara Mageean's. Kiernan coached Mageean for years before she moved to Manchester in 2017 to be coached by Steve Vernon.

There will be a few people who walk through your life and leave lasting footprints in your heart. Jerry Kiernan was one of those people. I feel truly blessed and privileged to have been able to call him my coach and friend.

Thank you Jerry, for everything. pic.twitter.com/FaxJPd27v0

Speaking to Greg Allen on RTÉ Drivetime programme yesterday, Mageean gave a truly wonderful tribute to her former coach and the profound influence he had on her running career and development as a human.

'He was more than a coach to me. He was a friend and a mentor and to be honest he was like a father figure.

'He had this special ability to meet anybody at their level. He was humble and a tough man. People from the outside probably thought he was hard and stern. But anybody who knew him knew that wasn’t the case. He was a big softie. He had two lovely sons and I know they will miss him dearly.'

'My boyfriend will probably be upset to hear that it wasn’t hard to leave him and come to Manchester but it was hard leaving Jerry. I felt like I had broken is heart a little bit.

'He spoke so passionately about the past, but he didn’t live in the past at all. He didn’t carry an air of a great athlete. There are many athletes you meet in Ireland and they are guests of honour whenever they go. Jerry just came and sat down. I loved that about him.

'When he took me my under his wing, he made me believe in my ability. He was a special man and there will be never be another Jerry Kiernan, that’s for sure.

We can only imagine how excited Kiernan was to see Mageean smash Sonia O'Sullivan's Irish record in the 1000m last August. You can get an insight into Mageean's rapport with her coach in this short clip.

'Oh, jeez! That was closer than I thought!' Ciara Mageean reacts to her 800m win alongside her coach Jerry Kiernan. pic.twitter.com/3qd2KnJQQL

There may never be another Jerry Kiernan, but the likes of Ciara Mageean will carry his torch onwards.

SEE ALSO: Why Jerry Kiernan Was The Perfect Pundit 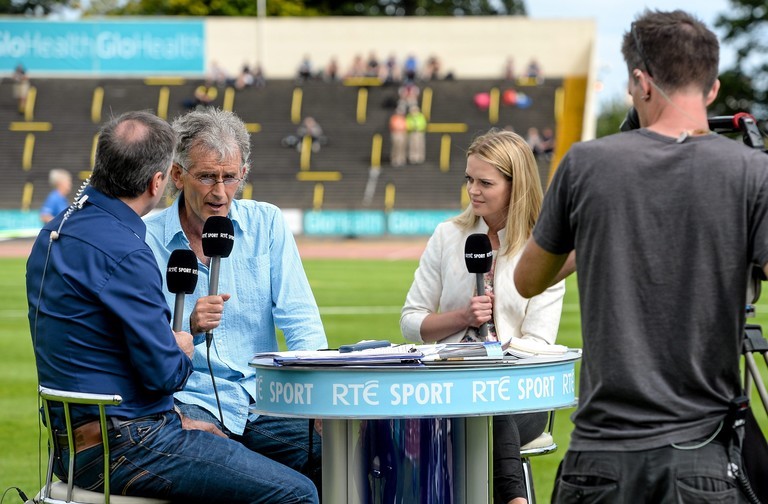 Athletics
5 months ago
By PJ Browne
Ciara Mageean 'Annoyed And Disappointed' After 1500m Heat
Athletics
1 year ago
By Balls Team
Nadia Power Sets New Irish U23 800m Record In Italy
Athletics
1 year ago
By PJ Browne
Ciara Mageean Has Proved She Can Compete With The Best In The World
Popular on Balls
Football
1 day ago
By John Dodge
These Are The Irish Footballers Who've Received Ballon D'Or Votes
Rugby
8 hours ago
By Colman Stanley
Jimmy O'Brien Announced His Arrival On The Biggest Stage This Afternoon
The Rewind
12 hours ago
By Gary Connaughton
Quiz: From Which Irish County Did This Company/Product Originate?
Football
14 hours ago
By Gary Connaughton
Carragher Reveals Unhappy Instagram Message From Lionel Messi After MNF Comments