Dean Adams (Ballymena & Antrim) brought out all that is good in sport with a poignant 60m victory at the Irish Life Health National Indoor Athletics Championships on Sunday.

Adams took a consummate victory in a swift 6.74 seconds but it was about a lot more than that as he marked the first year of the Craig Lynch Cup in honour of the recently deceased sprinter.

It was an emotional victory for the Ballymena sprinter who was brought to tears in honour of Lynch and then unfortunately also another close friend who passed away in recent weeks. It was a special moment to witness the cup being presented and on the back of his race number he had “Lynch #justrace” in a gesture to the man's competitive philosophy.

The big screen in the Sport Ireland National Indoor Arena showed Craig Lynch winning the national 60m title in 2016 and then a commemorative picture before the final. Mark Smyth (Raheny Shamrock) pipped Conor Morey (Leevale) for second in 6.84 to 6.85. 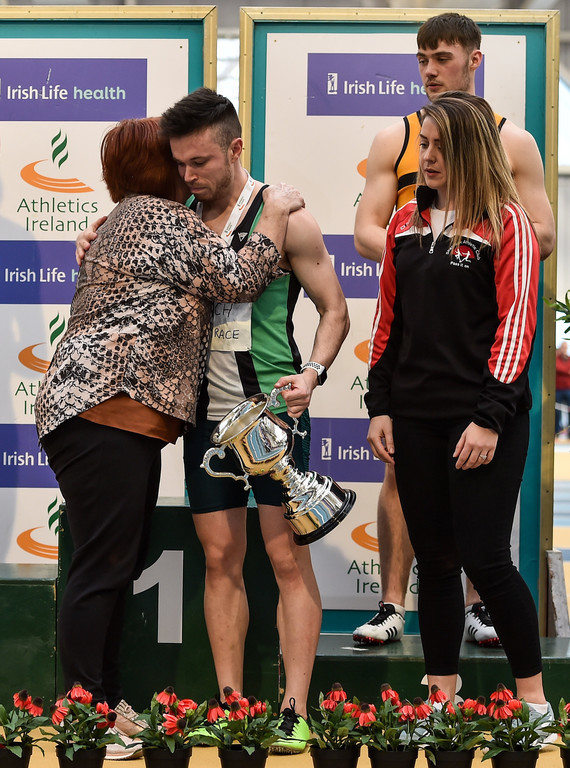 Ciara Neville (Emerald) won a classy women’s 60m in 7.30 matching the Irish U23 record ahead of the Healy sisters. Joan Healy (Leevale) finished second in 7.33 ahead of Phil (Bandon) in 7.36.

There was plenty of moments to savour on day two of the championships with John Travers (Donore Harriers) winning the 3,000m in 8:00.96 and Andrew Coscoran (Star of the Sea) a dominant winner in the men’s 1500m in a new championship record of 3:41.36 that could provide valuable world ranking points for the Olympics. Louise Shanahan (Leevale) won a tactical women’s 1500m in 4:40.45.

The 400m provided the anticipated excitement in confined quarters of the 200m track. Sophie Becker (St Joseph’s) edged Sharlene Mawdsley (Nepwort) in 53.75 to 54.10.

Cathal Crosbie (Ennis Track) caused a surprise in the men’s 400m winning in 47.93 from Andrew Mellon (Crusaders) in 48.02 and Brian Gregan (Clonliffe Harriers) in 48.21. It was an exciting dash for the break which Crosbie won. Gregan was poised but didn’t have it in the legs after a lengthy injury absence from competition.

Was an honor to wear the Shercock AC colors today alongside Craig’s coach @Jeremy_P_Lyons, his family, club mates and training group. A very fitting and classy tribute to the man who had such an impact on so many. He ran in lane 9 today and dragged @DeanAdams13 with him ❤️🖤 pic.twitter.com/ciRCcx8gIA

Mark English (UCD) must be running out of storage space in his trophy cabinet as he bagged another national title. The Donegal man waited until the last 200m to oust the front-running tactics of Zak Curran (DSD) in 1:49.09 to 1:50.19.

Sarah Quinn (St Colman’s South Mayo) and Gerard O’Donnell (Carrick on Shannon) were convincing winners of their respective 60m hurdles races in 8.32 and 7.95.

In the field Ariel Lieghio (Clonliffe Harriers) won the women’s pole vault with 3.95m while Saragh Buggy (St Abban’s) made it a horizontal jumps double winning her favoured triple jump in 12.80m.

David Cussen (Old Abbey) won the men’s high jump with a best leap of 2.08m. Keith Marks (Clonliffe Harriers) had a good victory in the men’s long jump in 7.33m.

There was a family double for the Finn Valley pair of John and James Kelly in the men’s shot put. John came out on top in 18.35 with James in second.

The 4x200m relays rounded out an entertaining two days of action with Leevale coming out on top in the women’s in 1:42.26 with Emerald running a national club record to win the men’s in 1:28.18.

You can view the full results from the National Indoor Championships here.