Erriyon Knighton booked his ticket for Tokyo by finishing third in the 200m at the US Olympic Trials on Sunday night.

The 17-year-old will be the youngest American track and field Olympian since miler Jim Ryun in 1964.

His performance was also notable as he again lowered the U20 200m world record, this time to 19.84. The Florida teenager had broken Usain Bolt's 2004 record in the semi-finals where he ran 19.88.

Sunday's final was won by the 2019 world champion Noah Lyles, who ran 19.74, the fastest time in the world this year. Kenny Bednarek finished second in 19.78.

Knighton came off the bend in fifth, possibly sixth, but a strong finish earned him the third US spot at the Games. He will travel to Tokyo not only as a young talent but also a real medal contender. 19.84 makes him the fourth fastest man in the world this year.

Sunday's run continued a remarkable summer for Knighton. Four weeks ago, he broke Usain Bolt's U18 world best when he ran 20.11. He has lowered that mark, and his own personal best, a number of times since.

Knighton, who turned professional in January when he signed a deal with Adidas, was not due to graduate from high school until next year.

Erriyon Knighton was right at the top of Alabama’s 2022 WR board early in the process. He decided to give up football to focus on track. He just finished in first place with a 19.88 in the men’s 200m (semi-final heat) in the Olympic trials. He is 17-years old. 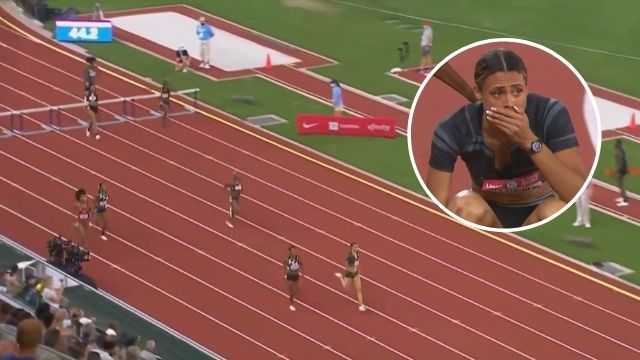