Morhad Amdouni has denied deliberately knocking water bottles from a table during the men's marathon at the Olympic Games on Sunday.

Around the 28km mark, the Frenchman - who was running with the leading pack - knocked numerous bottles from a hydration station, meaning some athletes behind him were unable to pick one up. Temperatures during the marathon approached 30 degrees Celsius.

Video of the incident, which went viral on social media, sparked anger. Piers Morgan, for example, awarded Amdouni, "The Gold medal for biggest dickhead of the Tokyo Olympics".

In a Facebook post, Amdouni said that he had knocked over the bottles as they were slippery.

"To guarantee freshness to the bottles, these are soaked in water," he said.

"Which makes them slippery. However, it is clear that I am trying to get one from the beginning of the row but these slide when we touch them."

Earlier, he had also addressed the controversy in a video on Instagram where he apologisd to his fellow runners.

"With fatigue and all that, I was gradually starting to lose lucidity and energy, while hanging on," he said.

"In principle, I try to be able to share also during the race, the bottles of water, while respecting everyone and going high and proud, to be able to fight for our colours of the jersey." 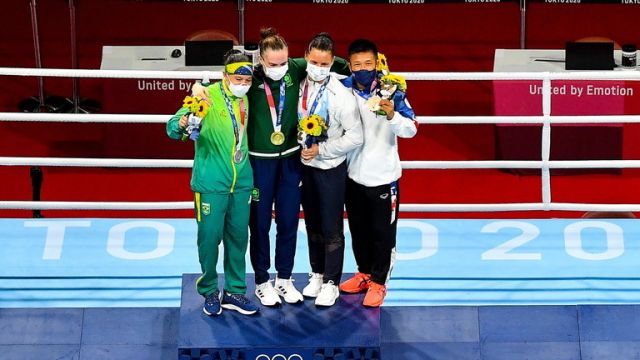 Athletics
2 months ago
By PJ Browne
Paul O'Donovan Turned His Hand To Cross Country At The Weekend
Olympics
3 months ago
By Cliona Foley
'We Are Best Friends... It’ll Be Tough In A Way Not Having Him Here'
Previous Next

Athletics
3 days ago
By PJ Browne
Fionnuala McCormack Smashes Personal Best In Valencia Marathon
Athletics
2 months ago
By PJ Browne
Paul O'Donovan Turned His Hand To Cross Country At The Weekend
Olympics
3 months ago
By Cliona Foley
'We Are Best Friends... It’ll Be Tough In A Way Not Having Him Here'
Popular on Balls
The Rewind
23 hours ago
By Gary Connaughton
Watch: Storm Barra Has Been Wreaking Havoc Around The Country
Football
1 day ago
By Jonathan Byrne
How Leeds United Became Barcelona's Champions League Nightmare
Football
19 hours ago
By Gary Connaughton
Sebastien Haller Breaks Remarkable Champions League Record Against Sporting
GAA
1 day ago
By PJ Browne
Thought Of Absent Brother Heightened Emotion In Graeme Mulcahy