'Ireland Really Is Producing Some Superstars In The Past Few Years'

Saturday at the European U20 Athletics Championships in Tallinn was a red letter day for Ireland. Three gold medals were won, adding to the gold which Rhasidat Adeleke claimed in the 100m on Friday.

Adeleke completed a sprint double on Saturday by winning the 200m. She also broke her own Irish senior record with a 22.90 run.

It was followed up by wins in the 1500m for Longford teenager Cian McPhillips and in the 3000m for Tyrone 16-year-old Nick Griggs.

Adeleke, McPhillips and Griggs win U20 golds for Ireland

"It was very tough," said McPhillips after his race, speaking a maturity far greater than you'd expect from someone who's just finished their Leaving Cert.

"My season is only starting now due to school, and getting Covid earlier on in the year really hampered my preparation coming into this championship. I'm still shocked that I've managed to pull it off. It's really making me excited for what I can do in the coming weeks."

Cian McPhillips won gold in the1500m at European Under-20 Championships in a time of 3.46:55, despite his season only starting now after getting the small matter of the Leaving Cert out of the way ? #rtesport pic.twitter.com/Ivg23aUe1O

McPhillips won in a four-way battle down the home straight, beating Nick van Riel of the Netherlands and Great Britain's Henry McLuckie.

"I could see the shadows of the guys coming up behind me," he said.

"I was really pushing from 150m on. I was trying to control the rest of the race, purely because I knew in 1500m that last 200m is important. In fairness, the others put it right up to me, and it was real battle to the line. Luckily, I had a little bit of a head start that allowed me to get it in the end."

McPhillips added: "We really are producing some superstars in the past few years. It's only getting more with every passing championship.

"Obviously, we have Rhasidat Adeleke, and she's nearly worth two or three golds every championship. Now we've got some new and exciting guys coming up in the distance events as well, sprint events, and decathlon. We're really becoming a proper team that's capable of challenging the big names in Europe."

Adeleke, who is in college at the University of Texas, said her plan for the championships worked perfectly.

"After five rounds, to PR as well. What else can I ask for? I've done exactly what I planned to do. I thank God, thank my family, thank my coach.

"We have been coming up in the sprints. There are going to be a lot of sprinters to watch out for in the coming years. Especially in Paris 2024. We are on the rise. Just watch out!"

"We've been coming... there's going to be a lot of sprinters to watch out for in the next couple of years. We're on the rise - just watch out!" - Two golds in 24 hours for Rhasidat Adeleke who says Ireland is a coming force ? https://t.co/VnGhS4Ir7O #RTEsport pic.twitter.com/LHA5pSpjvQ 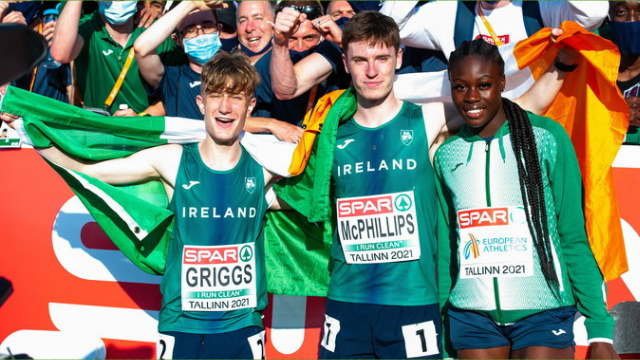