Probably the closest we'll get to the podium at Sochi 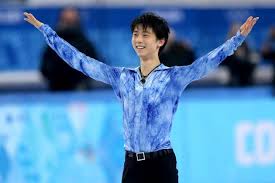 Finally, there has been some Irish success at Sochi, in the most tenuous way possible.

The song features vocals from Thin Lizzy frontman Phil Lynott, who co-wrote the song with Moore. It reached number eight in the UK Singles Chart in 1979.

Hanyu, 19, scored 101.45 points, becoming the first skater to break the 100-point barrier. He is four points clear of his nearest rival, Patrick Chan of Canada.

His chance of taking gold has been increased further by the withdrawal of Russia's four-time Olympic medalist Evgeni Plushenko, who withdrew during the warm-up and retired from all competition shortly after.

Impressive, but we still feel that "Out in The Fields"-inspired routine, preferably done after a skinful of porter, would be the true test for any world number 1.

Athletics
7 years ago
By Paul O'Hara
Two Irish Competitors Go For Olympic Glory At Sochi Today
Athletics
7 years ago
By Paul O'Hara
Irish Snowboarder Seamus O&#039;Connor Through To Semi-Final At Sochi
Athletics
8 years ago
By Eugene Fogarty
Pictures: Rob Heffernan Collects His Gold Medal In Moscow
Popular on Balls
Golf
46 minutes ago
By Jonathan Byrne
Sky's Ryder Cup Holograms Are Freaking People Out
GAA
1 hour ago
By Donny Mahoney
Much Has Changed Since Jack O'Connor Last Managed Kerry
Golf
2 hours ago
By Jonathan Byrne
Bryson DeChambeau Hit One Of The Most Audacious Drives In Ryder Cup History
Golf
3 hours ago
By Eoin Harrington
Shane Lowry Made A Brilliant Start To His First Ryder Cup Round