Inspirational Kerry Teenager Ready To Take On The World

Jordan Lee was born without a left forearm.

"When I was developing, the umbilical cord wrapped around my elbow, stopping the blood flow and stopping the growth," explains the 19-year-old, all the while tapping just above where the limb should have been.

"My parents didn't know about it all. It came as quite a shock to them because it never showed up on any scans."

For the teenager, his disability was obviously a disadvantage when it came to sport but never an insurmountable hurdle. He played soccer, won an able-bodied tennis competition age 12 and played basketball for the Ireland under-15s.

"I just had to work harder than everyone else," says the Kerryman.

"I would get up every morning from the age of six before school to go swimming and play basketball. That's how determined I was to make history and to prove everybody wrong.

Suitors lined up to court the then 16-year-old.

After a couple of months, I decided on the high jump, partly because of my background in basketball where I always had a relatively decent jump.

My first competition was June 2017 and I was fourth... out of four people. I wasn't too happy with that! I jumped 1.55m. It was a very poor standard jumping by me but for the first year of my athletics career I didn't really have a coach. What I was doing was not really structured at all.

Then I was in the Castleisland track one day in November 2017 and I saw a local athlete – Tomás Griffin – he could tell I was getting frustrated, everything I was doing was completely sideways.

So he came and helped me for the rest of the session and I felt I learnt an awful lot from him. He said I could meet him at the track the following week at the same time and it came to a stage where he said 'I'll be willing to be your fulltime coach but you have to give me 100% or nothing' and that's the motto I use on all my social media. It's always '100% or Nothing!'

Between Griffin becoming his coach and competing at the 2018 European Para Athletics Championship, Lee lost 10kg and increased his speed by 30 per cent.

"I jumped three times the height of Carrauntoohil in that space of time so it's really funny to look back on those statistics and see how much you could progress and improve.

"My PB went from 1.55m to 1.84m - to add the context that that's 2cm over my own head backwards off one leg. I qualified for Europeans and won a bronze medal. I was disappointed with that as well as I underperformed greatly on the day.

"I remember being interviewed about how great an achievement it was and I personally didn't think it was.

"Initially, I struggled to realise what the high jump is and why there might be a disadvantage, thinking it's just jumping, you're not using your arm.

"But it's multiple different things. It's gym work, speed, conditioning and yoga. So many different elements make you a good high jumper.

"I can't do all the Olympic lifts, my prosthetic doesn't allow me to do the clean and jerk because the wrist movement on it is very restricted so I have to adapt those exercises, but I work that out with my coach and S&C coach Eamonn Flanagan in the Institute do, so I can do those exercises in a different way.

"You have a 20m approach in high jump but if you're running sideways your whole body position is off. When I first started my body position was all over the place because my right side is much heavier than my left because I don't have a left forearm. It's stuff like that people don't take into account but there's an awful lot to being a high jumper with one hand." 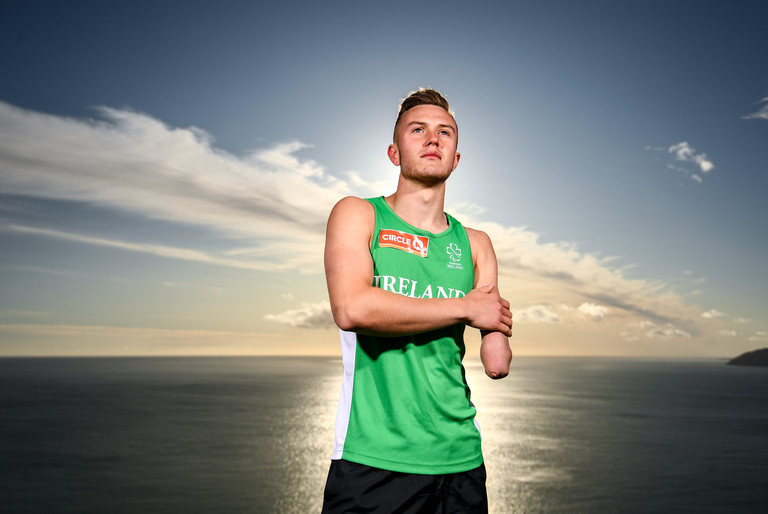 Athlete Jordan Lee is pictured at the launch of Circle K's 'Here for Ireland' initiative. Photo by Stephen McCarthy/Sportsfile

Lee now trains six times a week. Even on Saturdays, what is supposed to be his day off, he still does an hour-and-a-half of core work.

His week includes three gym sessions, two track sessions, one yoga session and a recovery day where he focuses on mobility and stretching.

The teenager began studying at Tralee IT this autumn but has since deferred his education for a year. There's a big, blipping destination ahead: Next year's Paralympics in Tokyo.

Earlier this week, he travelled to Dubai for a landmark event in his career: His debut World Para Athletics Championships. He did so as the number two ranked T47 high jumper in the world. His personal best of 1.95m puts him behind only Roderick Townsend-Roberts, an American eight years his senior.

Preparations have gone well. At the National Senior Championships in July, he finished fourth while setting that personal best. "Afterwards, they said we need to respect this guy and ever since myself and a few other high jumpers around the country get on really well and they respect me," he says.

That performance in Santry was followed up a month later by victory at the World Para Athletics Grand Prix in Paris. He jumped 1.92m and beat many of those he will face in Dubai.

"It took a nine-time world champion in Michael McKillop to calm me down afterwards!" says Lee.

"Even after winning it very convincingly, I was still disappointed because my goal going in was to win it and break the European record.

"Michael could tell I was a bit disappointed but a man of his experience and knowledge knew exactly what to say to me afterwards.

"He was telling me all the positives and once he outlined them to me I had to realise I was being a bit harsh on myself.

"In order to achieve and progress that's the attitude you need to have, to never be satisfied. That's my mentality when I compete, I want to literally raise the bar every time."

Circle K customers can use the Circle K app or their loyalty tag in-store to generate digital coins that Olympic and Paralympic hopefuls can use to fuel their journey to the Tokyo 2020 Games. To support Ireland's athletes, simply download the Circle K app today.