Marcus Lawler: The Young Carlow Sprinter On The Road To Becoming The Fastest Irishman Ever

Last month, Marcus Lawler had a weekend of contrasting emotions. The 22-year-old Carlow man set a personal best for the 200m. 20.71 at the European Team Championships in Vaasa made him the fifth-fastest Irish man ever over the distance.

Just 48 hours later, in the final, he would exit the Finnish track in a wheelchair, his hamstring torn and his season plans not quite in tatters but certainly ripped.

It's a minor disappointment considering the injury, but Lawler was well in contention with 80m to go before he pulled up looking like a sniper had hit his hamstring. Ramil Guliyev, who claimed European silver last year, won the race. Lawler doesn't think he would have beaten the Turk but he definitely could have challenged for second.

Despite being in a moment of personal pain, Lawler thought of the team. He got to his feet and hobbled over the finishing line, believing he needed to do so in order for Ireland to get the minimum number of points from the race. He later discovered that it was an unnecessary act.

After returning to Ireland, Lawler headed straight to Sports Surgery Clinic in Santry for a scan on his hamstring. The diagnosis would play havoc with his aims for the year.

At least four weeks out of action means he misses the European U23 Championships and the National Senior Championships. Two years ago, he finished seventh in the Euro U23 200m final in Estonia. This year, in Poland, he would have had real medal ambitions.

We put a plan in place to make an assault on this year's European U23. The way I was going, I was going out there with the mindset that I had unfinished business. I was coming back two years older, two years stronger, two years faster and I was going a lot better now than I was two years ago.

Unfortunately that's just gone. The team was announced on Thursday and my name was not on the list. That's just sport I suppose.

A mark of how well Lawler was running prior to his injury came a fortnight before it. At a meeting in Regensburg, Germany he ran 10.30 for 100m. The time was the fastest run by an Irishman in six years and put him third on the all-time list; just Jason Smyth's 10.22 and Paul Hession's 10.18 Irish record are ahead of him.

A place at the World Championships in London next month was an outside chance but there had been blips on the radar suggesting it was a possibility. A month ago in Spain, he ran 20.43 for 200m. It was inside the qualifying standard but the wind of 2.4m/s was over the legal limit.

Faster times at both 100m and 200m are undoubtedly in Lawler's future. His next goal, time wise over 100m, is to lower his PB into the 10.20s. Long-term, it's to challenge Paul Hession's record.

I was threatening to run a fast 100m. It was screaming to come out for the last year or two. 10.30, it's good running but Paul Hession has the national record at 10.18. A lot of people would have thought I was miles away from that but now suddenly I'm only 0.12 away.

It's great to be in the company of Paul Hession and Jason Smyth. Hession genuinely was world class. I'm knocking on the door, it's great to be third fastest but hopefully, I can get into the 10.2s. I don't want to settle at 10.30.

My next aim is to get down to the 10.20s and be consistent. Then, maybe, I can challenge Paul Hession's record. If I was to even come near it, it would be class.

Lawler would never have considered himself injury prone but uncharted country for him, on his personal speedometer, has presented new dangers. At the European Team Championships, he went over an edge he didn't know was coming.

Now that I'm getting into new territory, top speed is going up and I'm getting PBs, you're on a knife edge. On that Sunday I went over the edge.

It's important that when you're on that knife edge, you do everything to broaden it. It's a fine line. The injury was purely down to reaching new speed. My body just wasn't ready for it at this point in time.

Hopefully next time, I'll be ready and more able to handle the speed. I'll have to do more work to be as bulletproof possible.

Work to increase his ability to sustain that top speed will mostly be done in Carlow, a place he's proud to be from. He recently finished a four-year degree in Sports Management and Coaching at IT Carlow. Kilkenny and the Institute of Sport in Abbottstown are also places where he sharpens his talent.

While that work on the track and in the gym and physio room will undoubtedly be arduous, what Lawler sees as an even tougher aspect of being an athlete is one outside of training. Being an international sprinter costs money. There are trips to Germany and Spain for meetings, warm weather camps in Portugal. It all adds up.

Funding comes from Athletics Ireland; he's also on a scholarship from IT Carlow and local businesses have been generous. Lawler feels a job, certainly a strenuous one, would not mesh with his goals.

Coached by his mother, Lawler has built a support team which he believes can help him achieve his aims. He's already beginning to see the rewards. This year's new personal bests are notable milestones for someone still years away from their peak.

Moving abroad, where he could train year-round in warm weather has been mentioned to him but at the moment it's not a consideration. He looks at some of Ireland's top athletes right now and sees what they have accomplished while being based here.

He sees Thomas Barr, fourth in an Olympic final, Ciara Mageean and Mark English, both European medalists, and takes inspiration. 'They're all doing it in Ireland so there's no reason I can't either,' he says. 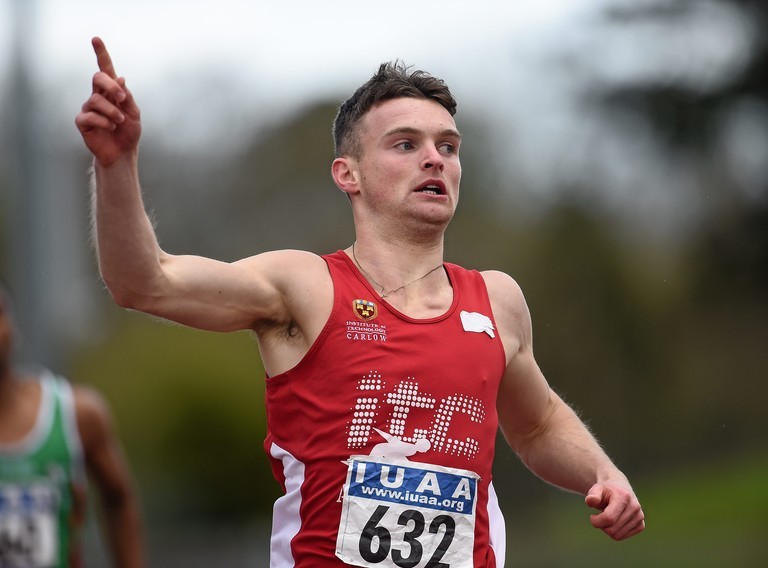 Lawler and his camp are not closed to outside influence. He's visited coaches in London and also Paul Hession's old coach in Scotland. He and his mother have taken elements of what they've seen and added them to the mix.

Though he currently ranks higher on the all-time Irish list for 100m, the 200m is his preferred event. 'There's a big time just waiting to come out,' he believes. More scope for achievement is also an attractive aspect of the longer distance.

With the 100m, you need to be running 10.00 to be at Olympic final level. With the 200m, if I got anywhere near Paul Hession's record, which is world class at 20.30, I could challenge for being in a World Championship or Olympic semi-final. I think it's more achievable.

The next Olympic Games will coincide with the beginning of what Lawler believes should be his peak as an athlete. When he and his mother sit down to sketch out a training plan this winter, it will be a three-year one with Tokyo in mind. At that point in his career, he will be the same age Paul Hession was when he finished fifth in a 200m semi-final at the Beijing Olympics.

In the short-term, he has had to realign his targets for this season. A discussion with his physio after returning from Finland made the World University Games in Taipei next month the fuel for his rehab. His injury and the limited time to recover from it means he will have to prioritise the more manageable 100m over his preferred 200m.

If I was fully fit and you were talking to me two weeks ago, I would have been telling you that I was going out there to target at the very least a final. If my 200m was going well, there was no reason why I wouldn't have been talking about getting a medal.

Ultimately, the injury should be just a minor setback in the career of a young athlete with ambition, drive and the ability to set new standards in Irish sprinting.

GAA
10 months ago
By PJ Browne
'I Love Speed. Liam Challenged Me To Bring Some Element Of That To The Team'
Previous Next

GAA
21 hours ago
By PJ Browne
Dublin's 2011 Class: What Happened To The Non All-Ireland Winners