Mo Farah has released a statement in response to allegations that his coach, Alberto Salazar, abused prescription medicine and distributed illegal doses of supplements to his athletes. The Sunday Times have seen a leaked document from the United States Anti-Doping Agency claiming that athletes coached by Salazar were given secret infusions of a research supplement based on the chemical L-carnitine.

The supplement is not a banned substance for athletes, but infusions of more than 50ml in the space of six hours are prohibited.

The report claims that Farah was among the athletes who were given prescription drugs without a need to take them, and says that Farah took a dosage of L-carnitine before his first London marathon in 2014.

Two years ago, Farah addressed this by telling the Sunday Times that he had tried a legal energy drink containing the supplement, but "saw no benefit" to it. Farah refused to comment on this story to The Sunday Times, but in the last few minutes, Farah has released a statement on his Facebook page. 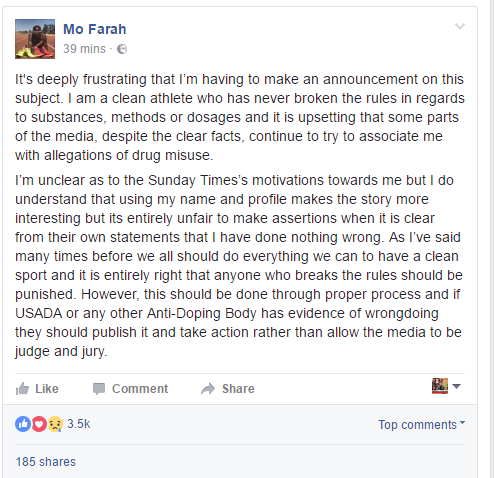 Athletics
1 year ago
By PJ Browne
Paula Radcliffe's Take On Alberto Salazar's Ban Was Car Crash TV
Athletics
2 years ago
By Arthur James O'Dea
Mo Farah Announces Split From Controversial Coach Alberto Salazar
Athletics
5 years ago
By PJ Browne
Startling Claims Made About Mo Farah's Build-Up To The 2012 Olympics
Popular on Balls
The Rewind
19 hours ago
By Gary Connaughton
Quiz: How Well Do You Remember The 'Friends' Roommate Quiz?
3