Four time Olympic gold medallist Mo Farah is the latest athlete to have question marks raised over his performances as he, along with several other high-profile Olympians such as Justin Rose and Rafael Nadal, has had therapeutic use exemption certificates (TUEs) that he has used during his career published by the 'Fancy Bears' Russian hacking group.

And while there is nothing untoward about the actual use of TUEs, what will perhaps cause eyebrows to be raised in this instance is the fact that last year Farah claimed he had only ever had one TUE. This was after he collapsed following a training run at altitude in Utah, USA in the summer of 2014.

This claim contrasts with the release of data by 'Fancy Bears' that appears to show a TUE dated in October, 2008 that allows Farah to use triamcinolone, the same substance that caused Bradley Wiggins to hit the headlines in recent days because of the frequency with which he was using it. 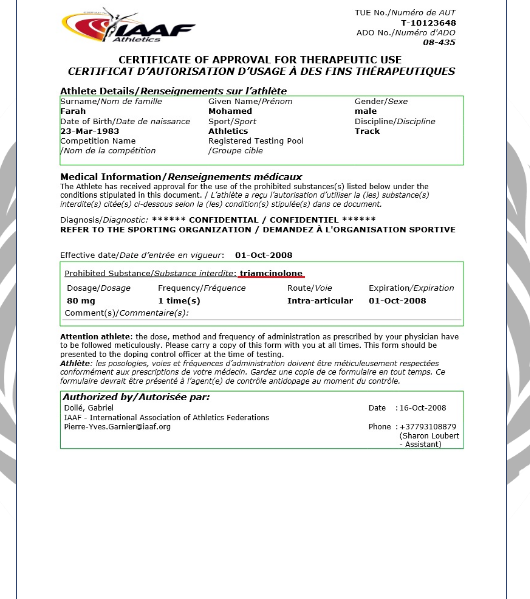 Triamcinolone is a corticosteroid that is typically used to treat skin conditions.

In recent days Dr Richard McLaren, the figure who led a high-profile investigation into Russian sports that exposed a state-sponsored doping programme, claimed that TUEs could indeed be open to abuse by athletes seeking an unfair advantage.

There is no suggestion of impropriety from Farah but the revelations do leave questions to be answered.

Of course, this isn't the first time that Farah has been forced to face awkward queries regarding his past. A BBC Panorama documentary last year about his coach Alberto Salazar suggested that Salazar had encouraged some of his athletes to dope, though Farah was not among them. And the Brit later had to act to distance himself from Jama Aden, the disgraced former coach of world record-holder Genzebe Dibaba. Farah had in his 2014 autobiography appeared to suggest that Aden was somewhat involved in his training.

Mo says he had known Jama for years in his 2014 autobiography (left) but tells @EwanMacKenna this (right) in 2016. pic.twitter.com/TxnPXIVdvU

SEE ALSO: Watch: The Dramatic Triathlon Finish That Will Restore Your Faith In Sportsmanship

Athletics
2 years ago
By Maurice Brosnan
Watch: Mo Farah's Coach Has A Bizarre Reaction To Him Winning BBC SPOTY Award For 2017
Previous Next

Athletics
1 year ago
By Gary Connaughton
Haile Gebrselassie Makes Mad Claims About Mo Farah's Behaviour At Hotel
Athletics
2 years ago
By PJ Browne
Mo Farah Had Some Comical Water Bottle Troubles During London Marathon
Athletics
2 years ago
By Maurice Brosnan
Watch: Mo Farah's Coach Has A Bizarre Reaction To Him Winning BBC SPOTY Award For 2017
Popular on Balls
The Rewind
19 hours ago
By Gary Connaughton
Quiz: How Well Do You Remember The 'Friends' Roommate Quiz?
3