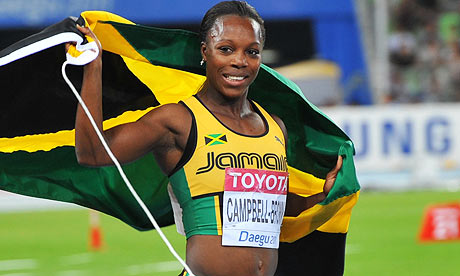 No, it's not that one. But this is highly unwelcome news for the world of athletics. Veronica Campbell-Brown, the double Olympic and double World Championships gold medal winning 200m and 100m sprinter has been suspended for failing a drugs test and is currently being investigated by the The Jamaican Athletics Administrative Association (JAAA).

The 31-year-old denies any wrong doing but has accepted the suspension pending a further investigation. Jamaica's first world sprint champion tested positive for a diuretic, which can be used to mask the use of performance-enhancing drugs, at the International Invitational World Challenge on 4 May, but the JAAA have only chosen to disclose the identity of the failed test now.

According to sources close to Jamaican athletics, she is cliaming that the banned diuretic was contained in a cream which she had been using to treat a leg injury and which she had declared on her doping control form. In any event, it is a disturbing development in the ongoing struggle against doping in sport.

Olympics
1 month ago
By Cliona Foley
'We Are Best Friends... It’ll Be Tough In A Way Not Having Him Here'
37