In the last two years, Presentation Terenure has allowed boys to enrol at what was previously an all-girls school.

It has resulted in challenges from first and second-year students which Rhasidat Adeleke finds amusing.

"They're always coming up, 'I bet I'm faster than you'," says the 16-year-old who last month won the 100m and 200m golds at the European Youth Olympics [EYOF] in Baku.

"They're always up for a race. It's funny, it's entertaining.

"Maybe like on a sports day or something. I wouldn't just do it randomly. Maybe if it was during PE and they were there, I'd be like, 'Sure! Why not?' and just go 50 per cent."

The two golds which Adeleke won last month were just the latest triumphs in what has been a stellar underage career. Aged 14, she won 200m silver at the 2017 EYOF. Last year, she claimed 200m gold at the European U18 Championships in Hungary and was also part of the Irish U20 relay team which won silver at the World Championships in Finland.

Winning the 100m last month was somewhat unexpected. She only decided to enter a month out from the competition following consultation with her coach, the national sprints coordinator, Daniel Kilgallon.

Initially, Adeleke had planned to be part of the Irish U20 relay team for the European Championships but withdrawals from the team led her to believe it would be more beneficial to double up in Baku.

The following 12 months will major ones in the life of the Tallaght AC athlete, who turns 17 later this month. She's entering her Leaving Cert year, though is unsure of what path to take in her education. What's certain: she will not be without options. US colleges have already been in contact. 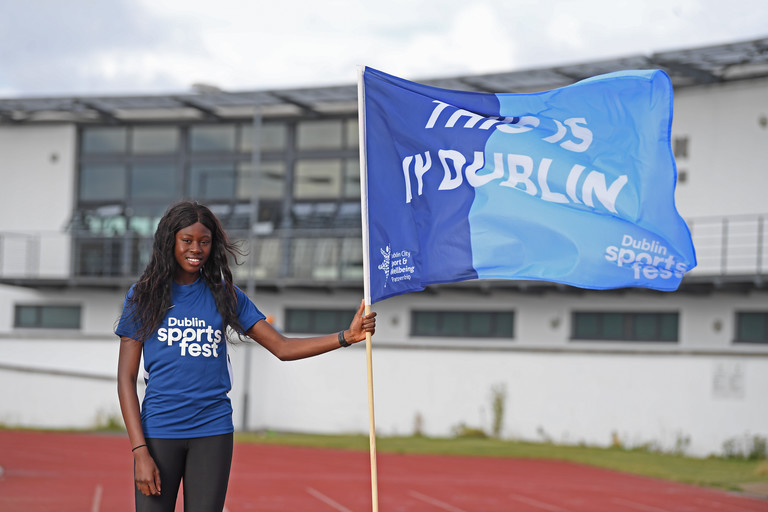 Rhasidat Adeleke is photographed at the launch of the Dublin City Sportsfest 2019. A week-long celebration of sport & physical activity from 23-29 of September. Everyone is encouraged to participate regardless of age, ability or background. For more information visit www.dublincity.ie/sportsfest. Photo by Stephen McCarthy/Sportsfile

"A few American ones [have been in touch]," says Adeleke, speaking at the launch of Dublin City Council's Sportsfest 2019.

I don't know if I want to go to America. I'd probably stay in Dublin. I'll have to see. I don't know anything for definite. It's a blur to be honest at this stage.

It's kind of tricky. I feel like going to America is a bit of a risk. It's a risk that you take, it could be successful, but I don't know...

I might try and actually see because it's quite hard to judge from other people, just seeing what it is in pictures and stuff. I might actually go over there and check stuff out and it might change my mind.

If she does take the American scholarship route, spots such as Louisiana State University, Texas and Kentucky would be her preference.

The transition from star underage athlete to successful senior athlete is a tough one to navigate - many have been lost to the sport. The maturity with which Adeleke speaks - she has the ease and thoughtfulness of someone 10 years older - would make you believe that coupled with her athletic potential, she has a live chance of making that jump.

A sign of that maturity came last November when she decided it was time to change her coach.

"I needed a training group that was specific to sprints," she says.

"My technique has improved, my starts have improved, even my mindset towards stuff.

"I used to be really uptight about what times I get but now I'm just like, 'winning is the priority' and times are for different types of competitions; some competitions are about times and some are about winning."

The past two years spent attending various championships have been an education. The Youth Olympics are a primer should she one day compete at the real deal.

She has also learned to appreciate the value of staying relaxed.

I feel like the first time [at the EYOF] I was really nervous and uptight. I kept checking the rankings, kept checking where I was ranked, 'Oh, I'm ranked second in this race, I should come second'. I was too practical.

In Gyor, I learned from that. I learned to stay relaxed and I knew that being relaxed was what got me the gold medal. I tried to do that this year as well. Stay relaxed, maybe you are ranked in second position or whatever but you can still come first.

Last year, I was ranked fifth going into the [European U18] championships and I won. I just feel like anything can happen if you put your mind to it.

On Wednesday morning comes another step. Adeleke heads off to Norway as part of the Irish relay team for the European Team Championships. It's her first time travelling with a full Irish senior squad.

Along with her Leaving Cert, next year has another big target: the World U20 Championships in Kenya. That will be her maiden competition at world level.

"I just won't let that get to me," she says, "pressure is a good thing, it means you are up there if you have pressure. I'll use it to perform."