"To Get Through To The Other Side Of This And Have A Huge Event Of Sport, It Will Be A Massive Celebration"

Irish Olympian Thomas Barr has spoken of his relief that the Tokyo Olympic Games have been postponed until 2021.

Speaking to 2fm's Game On, Barr claimed that though he was at a loss as to what to do now his entire goal for the year has moved, it was the inevitable and right decision.

It would have been really disappointing if it was put on this year and people couldn’t come or athletes were really strained with their training, not being able to prepare properly.

My parents had bought tickets to go over and watch. If there was to be no audience allowed it would have been really hollow.

This was 100% the right decision, all things considered. I’m not feeling bitter or sorry for myself. I am taking a lot of comfort in the fact there is safety in numbers. I’m not the only one going through this.

Waterford man Barr broke the Irish record twice in Rio four years ago, finishing an incredible 4th in the 400m hurdles, just five hundredths of a second away of a medal placing. 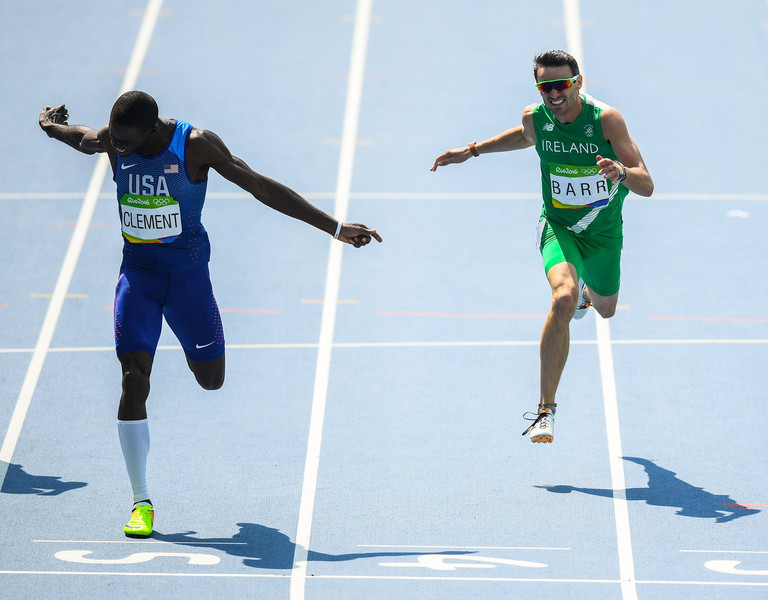 Now 27, he doesn't feel another year on the clock will do him any harm getting ready to take on the world again in Tokyo, especially as there had been a growing concern about the standard of preparations during self-isolation, even with some ingenuity on how to get around it.

We kicked the couches out of the sitting room and turned it into a bit of a gym.

We managed to get a treadmill, a weights platform, an Olympic bar and stuff like that. That was how we were training.

Outdoors we were able to train in smaller groups. We had a couple of hill runs, we went to an industrial estate and did some longer runs to try and keep the legs turning over. But it was just becoming really difficult to try and train effectively while also trying to keep everybody safe and out of risk.

Even so, it's hard to believe that everything was firing at full cylinders at such a crucial stage of training.

That's where I’m feeling a lot of relief. We’re not putting pressure on ourselves now to try and train at the capacity of an Olympic athlete, without any way of actually doing that. We were trying to stay away from people within the group, we didn’t want to be putting our coaches or anyone else at risk.

There is no reason why, if I can stay fit and healthy and injury-free next season, that I can’t get into that same shape again.

Barr's feeling of relief at a call being finally made by the IOC yesterday has been one that has been echoed by athletes around the world since the announcement was made.

You can listen to the full interview with Thomas Barr on Game On here.

Athletics
1 month ago
By PJ Browne
Kevin Seaward Becomes Second Fastest Irishman In The Marathon
Popular on Balls
Football
6 hours ago
By Balls Team
Vote For Ireland's Greatest Football Jersey - Last 16 Round
Rugby
5 hours ago
By PJ Browne
Ireland 2010 U20 Six Nations Winners: Where Are They Now?
3

Quiz
6 hours ago
By Balls Team
Quiz: Name The Famous Ireland Match With Only The Team Photo
6

Snooker
16 hours ago
By Michael McCarthy
Quiz: Can You Name 20 Snooker Players From Their Nickname?