Geelong Cats are back in the AFL Grand Final for the first time since 2011, after storming home against the Brisbane Lions in their preliminary final this morning. It was the Cats' fifth appearance in the preliminary final since they last reached the Grand Final nine years ago, but any worries that it would be five defeats in a row were firmly put to bed with a 82-42 victory.

Irish players, Zach Tuohy and Mark O'Connor both played integral roles, with Tuohy's fourth quarter goal all but ending the game as a contest and rounding off a great personal performance.

As good as his on-field performance was, his post-match interview was when he really peaked. The interviewer asked the 'Portlaoise' man: "Tell us what the scenes will be like in Portaloosh, in Ireland, your home town. Mum and dad, do they get to stream the games? They're able to get it in real time?"

'Portaloosh,' can they get it in real time? Yea, they've got internet and stuff like.

Get it in real time? I think the carrier pigeons have to get there with the score. Yea, they get in real time. It's 'Portlaoise' FYI as well. People back at home will give out if I don't correct you. 'Leash' like a dog leash.

He added: "Yea they're all watching it. All my friends and family are watching it. Under normal circumstances I'd probably have some of family here but they're obviously all a great support for me."

The Cats will now face Richmond Tigers, the defending champions, in next weekend's Grand Final. 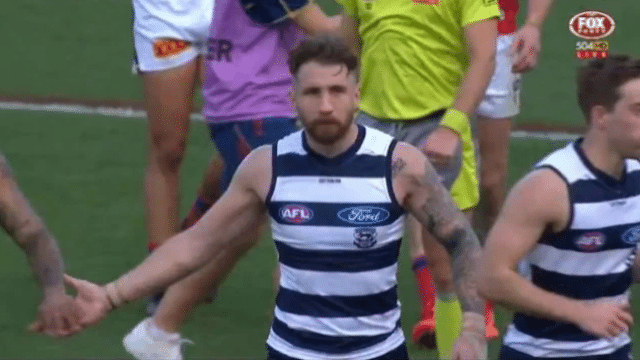 GAA
2 years ago
By Maurice Brosnan
"Do They Really Exist? Jesus Christ, How Bitter Do You Have To Be?"
896

GAA
2 years ago
By Maurice Brosnan
"Do They Really Exist? Jesus Christ, How Bitter Do You Have To Be?"
Aussie Rules
2 years ago
By Maurice Brosnan
Watch: Irish Zach Tuohy Stuns Melbourne With Huge Last Minute Winner
Popular on Balls
Cycling
1 hour ago
By Eoin Harrington
Sam Bennett Takes Impressive Stage Win In Portugal
Motorsport
6 hours ago
By Eoin Harrington
Romain Grosjean To Make F1 Return, Months After Inferno Crash
Olympics
6 hours ago
By John Dodge
Updated List Of Every Irish Sportsperson Who's Qualified For The Summer Olympics
Golf
6 hours ago
By PJ Browne
Rory McIlroy Totally Against Controversial Golf League