Zach Tuohy has forged quite the career for himself in Australia. Heading to the country as a raw 20-year old with Carlton, the Laois man has certainly established himself as one of our best AFL exports.

He made 120 appearances for Carlton, going on to make a further 93 since his move to Geelong. He has also kicked 71 goals in that time.

Tuohy has certainly won plenty of plaudits down under over the years, with his exploits at earlier today another example.

He was in the Geelong team for the clash against St Kilda, with the game taking place in the mid morning Irish time.

The 31-year old produced a frankly ridiculous kick, punting the ball from his own goal into the opposition half. The commentators went absolutely mad for it.

This is not the only time Tuohy has hit the headlines in recent times.

His interview after a win over the Brisbane Lions to secure a place in the AFL Grand Final last October was certainly well received in this part of the world, with Tuohy slagging off the interview for his pronunciation of his hometown Portloaise.

'Portaloosh,' can they get it in real time? Yea, they've got internet and stuff like.

Get it in real time? I think the carrier pigeons have to get there with the score. Yea, they get in real time. It's 'Portlaoise' FYI as well. People back at home will give out if I don't correct you. 'Leash' like a dog leash.

You can take the man out of Laois... 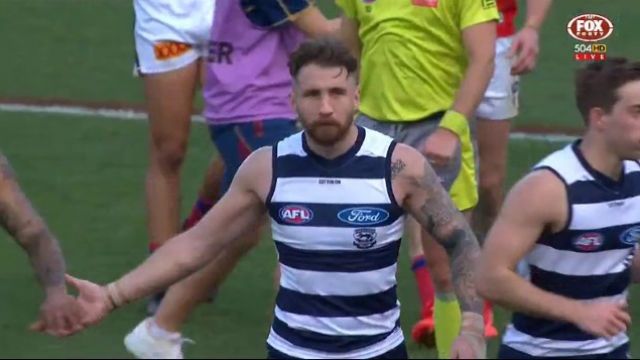