CJ Fulton - 'It Is Tougher, They All Know What I Can Do Now Obviously'

“Basketball players of the highest calibre do not gravitate to the Ivy League,” McPhee explained. Subsequently, “excellence within its membership has seldom been worth more, nationally, than a polite smile.”

Bearing witness to a prodigious talent flourishing far from the preserves of big-time college basketball in the United States, CJ Fulton announced his arrival on the Irish stage in similarly unsuspecting style.

To the casual viewer, it was breath-taking. How can such a young player be so relentless in the given circumstances? Yet, like those who wondered how to appropriately measure Bradley's brilliance against an unlikely backdrop, what does the casual viewer really know without validation from a more qualified source?

CJ Fulton 11/12 from downtown in the first half of an all Ireland final, 37pts. Best exhibition of shooting I have ever witnessed. The Green being brave and still fighting. Second half just started #schoolsbasketball

For CJ's coach, father and the former Irish international Adrian Fulton, it provoked a similar sense of amazement.

"If you make five or six [3-pointers] in a top-level game, that would be terrific," Fulton explained to the BBC. "If you were in a gym on your own and you took 18 shots, you'd be doing really well to make 15.

"So, to do this in a game context, it was very special."

The casual viewer was right all along. This young guy has something about him.

Almost a year on from catching the eye of everyone from the BBC to Bleacher Report, CJ Fulton is readying himself to go again. Still only 16-years-old, he is all too aware that his reputation will precede him this time around.

"I've set a high standard for myself but that's how I approach every game," Fulton assured at the Subway launch of the 2018/19 All-Ireland Schools Cup.

"I'd love to be able to shoot fifteen 3s in a game again obviously, but teams are trying to get closer to me, and there's more attention on me after that performance.

"It is tough, and I'm not going to get as much space. They know what I can do obviously, but on our school team, we have plenty of good players who'll offer all sorts of threats.

"So, they can try to take me out of the game as best they can, but we still have other weapons there to hurt them as well."

Trying to pinpoint what it is that allows him to play with such abandon on a national stage is another thing, however.

As he was leaving even the most seasoned followers of the sport wondering what it is they were witnessing, his head was in an altogether different place.

"I wasn't really thinking about it to be honest," Fulton explains of his mind-frame during this incredible sequence of shots.

"I didn't even know at the end that there'd been fifteen 3s, didn't even think I was near that. I was more concerned with the game and trying to win the final obviously."

"Like, I knew I was shooting the ball well, and, ya, just a good day at the office."

Refreshingly, CJ Fulton did "enjoy getting the bit of praise," and, while there is plenty more to achieve, the young Belfast man suspects that he "won't shoot like that ever again probably." 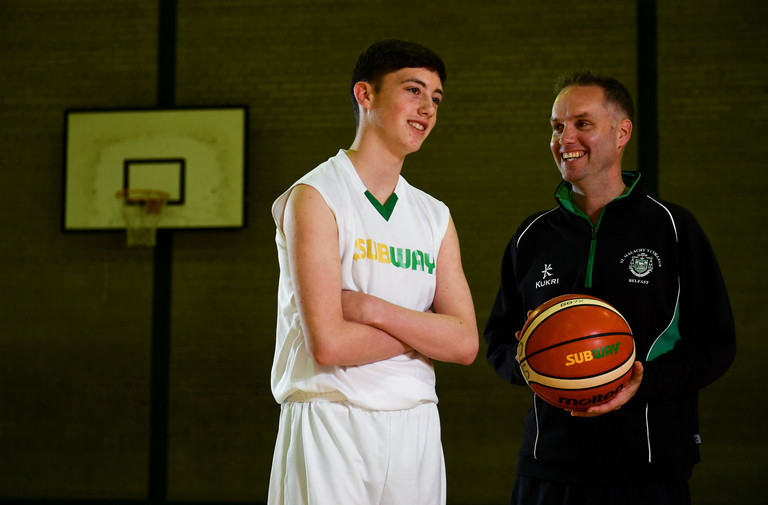 As you might expect of a prodigiously talented young basketball player, the prospect of one day making a living from the sport has its appeal for CJ Fulton too.

Self-admittedly a "home-bird," he couldn't but be excited at the prospect of taking his talents to Europe or, perhaps, America.

Relentless in his pursuit to be all that he can on the basketball court, noted interests in Gaelic football and soccer have had to take something of a backseat.

Making best use of a school that seeks to enable the talent of he and his teammates to grow, Fulton's recent inclusion in the Ireland's U-18 team came as yet another positive landmark against which he can mark his progress.

Like Bill Bradley all those decades ago, CJ Fulton is on the lesser travelled route to somewhere very exciting.

CJ Fulton was speaking at the Subway launch of the 2018/19 All-Ireland Schools Cup. A competition that sees over 5000 players from over 300 schools across the country take part.

Basketball
1 month ago
By Gary Connaughton
From Offaly To Guarding Michael Jordan: The Story Of Ireland's Only NBA Player
Basketball
6 months ago
By Sean Meehan
Basketball Ireland Make Decision To Cancel 2020/21 Mens National League
Previous Next