The Women’s Super League and Division One seasons get underway this weekend with a number of big clashes in store.

Newly-promoted Maree welcome Ambassador UCC Glanmire for their first ever Super League game. Maree will be without the services of Dayna Finn this season, but have been bolstered by the addition of American Carly McClendon and for Maree to enjoy success this season, she will need to play a key role. Irish international Claire Rockall returns once more for another season and her production, along with Fiona Scally inside, will be key for Maree in this opening game.

After a transition year last season, Glanmire will be hoping to bounce back in style this year and contend for some silverware. They welcome two new Americans in Tatum Neubert and Shrita Parker and will be hoping to get their season off to a winning start in what is set to be a very interesting clash indeed.

Old rivals Marble City Hawks and Fr Mathews go head-to-head in Kilkenny on Saturday evening in what’s set to be another great battle. Hawks have some injury concerns ahead of the new season, and will be looking to fill the gap that Kelly O’Hallahan leaves behind.

They struggled against a dominant Fr Mathews outfit last year and with the Cork side adding in yet more talent in Amy Murphy and Simone O’Shea, this game could be a tough opening fixture for Hawks.

A new-look Pyrobel Killester are home this weekend as part of a women’s and men’s Super League double header. They host Singleton SuperValu Brunell in their opening Women’s Super League clash in what is set to be a very interesting opening round fixture. Killester come in to the game with American Christa Reed back into the roster for another year, along with American Adella El Randle who featured for Glanmire last season.

They have lost some Irish talent in the form of Hannah Thornton, Aoibheann Byrne and Maeve Phelan, but will be looking to Rebecca Nagle and Aisling McCann to help drive the charge forward. Brunell meanwhile welcome star point guard Tricia Byrne back into the fold, and will be hoping to improve on their fourth place finish in last year’s league. 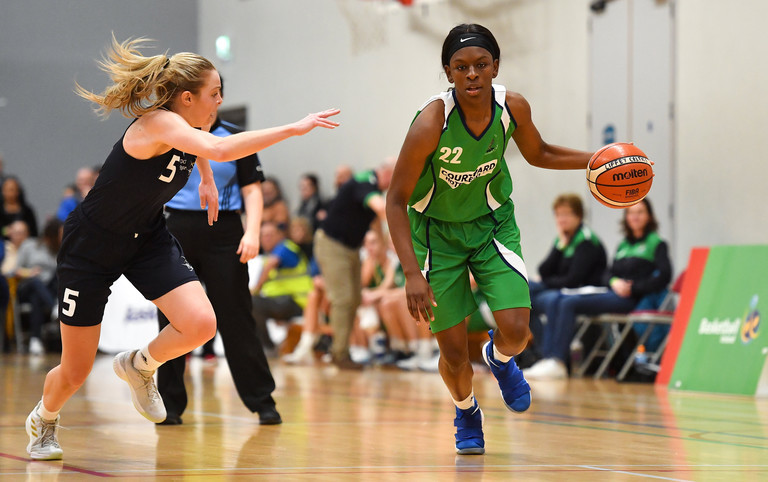 One of the most-anticipated games of the weekend sees the meeting of reigning league and Cup champions, Liffey Celtics, and long-time rivals, DCU Mercy in Leixlip on Saturday evening. Both teams boast new faces this season, with Liffey welcoming Kate O’Flaherty and Americans, Darby Maggard and Kylee Smith to their roster.

They also have a new coach in Laura Mullally, who is replacing Mark Byrne in the role. DCU Mercy meanwhile also boasts two new Americans in Meredith Burkhall and Ashley Russell, and also welcome some Irish international talent into their roster in Hannah Thornton and Maeve Phelan. This is set to be the showdown of the weekend and a win for either side here will be a great boost to start the season.

IT Carlow Basketball get their season underway with a big battle against Maxol WIT Wildcats on Sunday afternoon in Carlow. Wildcats are rumoured to be the ones to watch in this year’s League with some nice additions throughout the team, some strong underage stepping up into the Super League squad and Jillian Hayes once more taking the reins as head coach.

Carlow will be hoping to regroup quickly after the loss of some key players from last season, but may take a week or two to settle into the new roster.

The first weekend of the Men’s Super League season brought up some interesting results as preseason favourites Tralee Warriors and Templeogue both dropped their opening games. Tralee for the second straight year dropped their home opening game of the season. Without the services of Kieran Donaghy who was playing football for Austin Stacks, Tralee struggled to gel with their new players and despite leading by 13 points at halftime they ended up losing to UCD Marian by one in a low scoring game.

The biggest concern heading into this week for Pat Price will be the health of his new American guard who picked up an injury during the second half of the game. Templeogue also dropped their first game in an overtime thriller in Belfast. Leading by 15 points in the third quarter behind the incredible play of Lorcan Murphy (34 points) it looked like Templeogue were in full control.

A gritty fightback by Belfast Star forced overtime and a run of three straight threes by Belfast ultimately separated the teams. Below we look ahead to each matchup coming up this week. Templeogue and UCD Marian were due to play this weekend but there game has been postponed until the 10th of October.

Eanna had the perfect return to the Super League on the opening weekend with a dominant win over fellow newcomers Dublin Lions. Stefan Zecevic led the way in the opener with 24 points but the contributions of Dan Heaney and Neil Lynch will likely please Coach Darren McGovern most. For Eanna to push to the top half of the table it will be on the back of their Irish players contributions and the combined 25 points from Heaney and Lynch is promising.

For Killorglin there was a horror start to the year that saw them trail by 25 points at halftime. Dynamic American guard Allan Thomas was limited to 15 points in his debut, while big man Pranas Skurdauskas added 11. With a new coach and so many new players coming together it will likely take time for Killorglin to gel but player coach Colin O’Reilly will be targeting this weekend’s game as a must win game. The size and physicality of Skurdauskas could cause Eanna issues on the inside as they have no player that can match his physicality.

On the other end Killorglin will have to find a matchup that can limit Stefan Zecevic’s influence which could be difficult. The other matchup to watch out will be the two American point guards Joshua Wilson and Allan Thomas going head to head. Killorglin need to win the point guard battle in order to win, while Eanna just need for it to be competitive.

This will be a must win game for DCU Saints who would have been disappointed with their opening loss to Killester. Playing at home last week to a Killester team without an American was the perfect opportunity for DCU to start their campaign off with a big win but it wasn’t to be. DCU look to be without the services of Kevin O’Hanlon for the season which causes major problems for the Glanevin side.

The offense looked disjointed at times against Killester and their 17 turnovers at home will be a concern. Key big man Martins Provizors only attempted 6 shots in the entire game and DCU will need to find a way to get him more involved this weekend. For Lions the step up to Super League was always going to be a challenge, particularly with such a young team.

Eanna limited Lions to just 54 points at home and that will be a major concern for Coach Rob White. Conroy Baltimore is at his best when he provides energy and rebounding to teams but he will be asked to score more for Lions if they are going to be competitive this season. 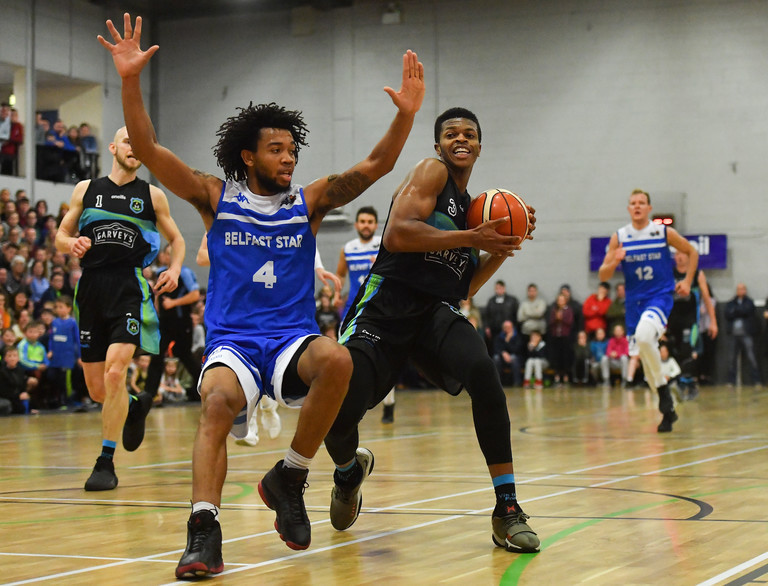 Belfast Star are one of the only teams who successfully went to the Kingdom and won last season and they will be hoping to deliver a major body blow to the Warriors by sending them 0-2 to start the year. Last year’s performance in Tralee was led by their professional trio of Mark Berlic, Sergio Vidal and Mike Davis who combined for 64 of their 89 points. Those three players are gone but Star will be hoping for more good work from Delaney Blaylock and Keelan Cairns who scored 47 between them against Templeogue.

Belfast are often a confidence team who when moving the ball and shooting well look better than any team in the country. This weekend’s game is unlikely to be pretty though as Tralee will be looking to pull out all of the stops to ensure they don’t go 0-2. With Kieran Donaghy returning and another game together for Jokubaitis to integrate into the team, Pat Price will be hoping for a more cohesive offensive performance. Before the season Paul Dick and Eoin Quigley were identified as two key players and they will need to have a better performance for Tralee this weekend.

The two men, who were leading contenders for player of the year last season, combined to shoot 4/19 against UCD and they will need to shoot better this weekend for Tralee to win. Key matchups to watch will be the battle of the backcourt with Paul Dick and Jonathan Lawton going head to head with Aidan Quinn and CJ Fulton. Tralee need to win the backcourt battle to ensure they get their first win of the year.

Both teams come into this game on the back of a big win. Maree comfortably beat their Galway neighbours Moycullen away from home. Their defensive performance was impressive holding Moycullen to just 58 points, while Darin Johnson impressed offensively with 25 points. For Maree they will need to get a consistent second scorer in double digits if they are going to trouble the better teams in the league.

Neptune turned a lot of heads with the dominance of their opening weekend performance. Spaniard Nils Sabata impressed with 20 points but it was a full team performance that saw Neptune score 55 first half points as they raced out to a 25 point lead. The addition of American Peter Hoffman may be one of the key additions of the season. Not only is he a strong physical player but he also enables player coach Lehmon Colbert to take some time on the sidelines and assess the game.

In his first year as player coach this will be invaluable for Colbert as he tries to get everything right for Neptune. The key matchup this weekend will be the battle of Irish internationals Kyle Hosford and Eoin Rockall. Maree need to win the point guard battle to find a way to be competitive in the game, while veteran big man Paul Freeman will have a tough job in limiting Colbert and Hoffman in the game.

Isaac Westbrooks returned to Killester with a bang as he scored 24 points in a big opening weekend win over DCU Saints. Brian O’Malley will be delighted to have come away from a tricky venue with a win, especially without the services of an American. Spanish big man Tomas Fernandez showed his promise with 24 points and 11 rebounds.

The question coming into the opening game was how Ciaran Roe and Isaac Westbrooks would co-exist in the backcourt. Westbrooks managed 24 points but Roe was 1/6 with just 4 points. The success of the team will likely depend on a balanced backcourt for the northsiders and it will be interesting to keep an eye on how this develops over the coming weeks.

For Moycullen, the opening weekend loss to Maree will be more worrying because they managed just 58 points at home. Shooting 4/31 from 3 point range won’t be good enough for Moycullen to compete and they will need an improved performance on the road this weekend to be able to trouble the defending cup champions.

SEE ALSO: In Keogh's Absence, Mick McCarthy's One Glaring Mistake Will Be Corrected

Basketball
3 weeks ago
By Gary Connaughton
Basketball Ireland Immediately Suspend All Competitions Due To COVID-19
Other Sports
3 months ago
By Balls Team
PREVIEW: Six Teams Hoping To Finish 2019 With A Bang
Previous Next