January might be a quiet month in Irish sport as we wait for the of the GAA National Leagues to get going and for the Six Nations, but the one thing you can always count on at this time of year is the Hula Hoops National Cup kicking into gear. Between the packed semi finals weekend in Cork to the finals in the National Basketball Arena in Tallaght, January always provides ample amounts of drama for players and spectators alike.

With just a week to go until Cork gets taken over for the semi-finals , Balls.ie sat down with four Hula Hoops National Cup ambassadors at the National Basketball Arena in Tallaght to talk about the just how much the Cup means in Irish basketball. 2018 champions Jason Killeen of Templeogue and Sarah Woods of DCU Mercy, along with six time champion Grainne Dwyer of Fr Mathews and Patrick Lyons of Moycullen discussed their experiences in the Cup and their thoughts on how this year's competition will go.

While the men's draw this year looks to be fascinating with the presence of the in form Belfast Star and Kieran Donaghy's Tralee Warriors, the fact that Sarah and Grainne will play on the opposite sides of the draw in the semi finals made the conversation between the two very interesting. Two of the star players in Irish basketball, Dwyer and Woods came up against each other in last year's classic women's final, which saw Sarah's DCU Mercy end Glanmire's dreams of 5-in-a-row. The game finished 72-71, with a buzzer shot from Glanmire just missing, thrilling both the crowd in the Arena and watching on television. 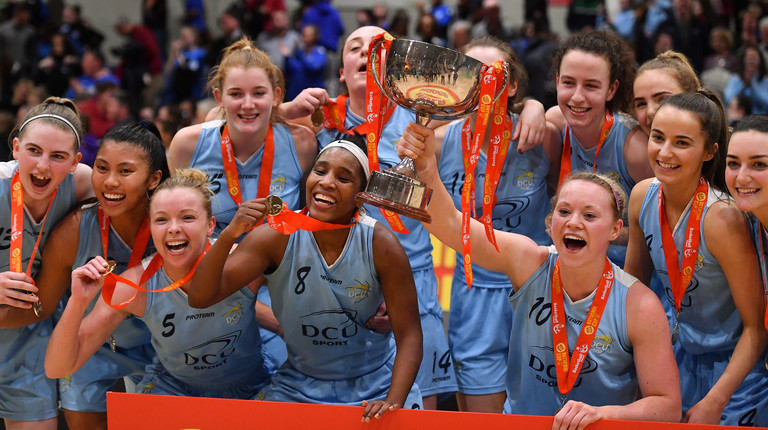 This year, Grainne has moved clubs, across Cork to Fr Mathews, but her presence, along with his sister Niamh, has propelled her new team to the semi-finals, even in their first season back at Superleague level.

It  might be a new team for Grainne, but it's going to be a very familiar Cork derby for her in the semi-final next week.

On the other side of the draw, DCU Mercy getting back into the final won't be straightforward either with the champions facing fellow Dublin team Liffey Celtic, who are unbeaten this season and already inflicted a heavy defeat on Mercy in the league.

Should both teams get through, there will be a certain symmetry in Grainne Dwyer being on hand to try to deny Mercy's defence of the Cup, after her dream of five-in-a-row was dashed by that team last year. Glanmire might have been finally put to the sword, but the Cork threat and the Dwyer sisters are still very much a factor in the Hula Hoops National Cup.

Basketball
2 years ago
By Maurice Brosnan
DCU Mercy Begin Cup Defense In Style With Comprehensive Win Over Glanmire
Popular on Balls
Football
19 hours ago
By PJ Browne
'He Deserved To Wear The Armband Today. Jason Is A Fantastic Player'
8