Zlatan Ibrahimovic was critical of NBA star LeBron James in an interview with a Swedish TV channel on Thursday. The AC Milan striker spoke out against LeBron's political activism, saying it was a 'mistake'.

In the interview, Zlatan said:

I don't like when people have some kind of status, they go and do politics at the same time. Do what you're good at. Do the category you do. I play football because I'm the best at playing football.

LeBron has been vocal about issues concerning race and social injustice in America. He organized a voter drive that saw 42,000 volunteers help out at polling stations in November.

His 'I Promise' school in Akron, Ohio, has 450 students enrolled. LeBron pays for tutelage, supplies and provided hot meals during the pandemic to the families of the students.

I don't do politics. If I would be a political politician, I would do politics. That is the first mistake people do when they become famous and they become in a certain status. Stay out of it.

To no surprise, LeBron did not take kindly to Zlatan's words after the Lakers win over Portland on Friday night. James was asked about his comments, and referenced an Ibrahimovic interview in 2018.

Zlatan claimed at the time he did not get the credit he deserved from Swedish media. He said it was because his name was Ibrahimovic, and not "Andersson or Svensson."

LeBron responded after Zlatan Ibrahimovic criticized him for his activism.

“I’m kind of the wrong guy to actually go at because I do my homework.” pic.twitter.com/VyKgBrYuiz

LeBron was asked about Zlatan's comments on Friday night:

I speak from a very educated mind, so I'm kind of the wrong guy to actually go at because I do my homework. He was the same guy who said when he was back in Sweden, because his last name wasn't a certain last name.

James said he would "never shut up about things that are wrong," making note of his upbringing and his responsibilities in charity and as a notable basketball player.

I have a group of 300-plus kids at my school that are going through the same thing, and they need a voice. And I'm their voice. I'm their voice, and I use my platform to continue to shed light on everything that may be going on, not only in my community, but around this country and around the world.

He later said, "there's there's no way I would ever just stick to sports." LeBron stepped up his activism and voice on political issues after Fox News' Laura Ingraham said basketball players should stay out of politics and "shut up and dribble" back in 2018.

We can only hope Zlatan wants to take this all on to the next level. Maybe they could be squeezed onto the undercard of the next Logan Paul fight night. 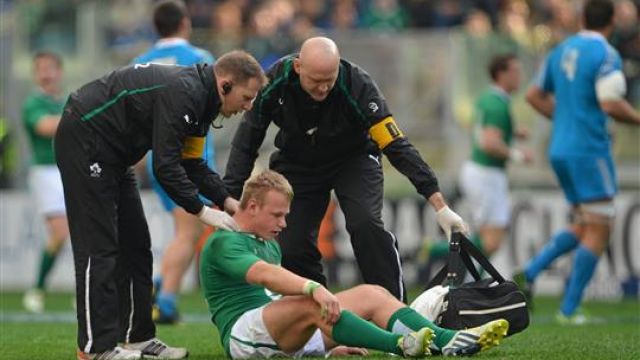 Gaming
21 hours ago
By Sean Meehan
Insane Fourth Quarter Settles Bizarre Tune Squad And Monstars Contest
GAA
1 day ago
By PJ Browne
How 2016 All-Star Mary Hulgraine Travelled To Hell And Back
Basketball
2 days ago
By Gary Connaughton
A Year On, Take Our Ultimate 'The Last Dance' Quiz
Previous Next