Liffey Celtics On Course For Double Glory After Monumental Comeback

The win sees Liffey clear at the top of the table and, with just three games to play, have the head-to-head on nearest contenders, DCU Mercy, to ensure that they will be crowned back-to-back Women’s Super League champions. In a historic season for the Kildare club, which saw them scoop their first ever National Cup title back in January, Saturday’s win over Glanmire was certainly a tricky one, leaving themselves a lot of work to do in the second half, after going in at the break trailing 28-45.

A huge reversal in the third and fourth quarters saw Allie LeClaire, Sorcha Tiernan and Briana Green find the target for the hosts and they managed to push on out to win by 10 in the end. A late injury to American, Briana Green, subdued celebrations somewhat though, as she left the game in the fourth quarter with a leg injury. 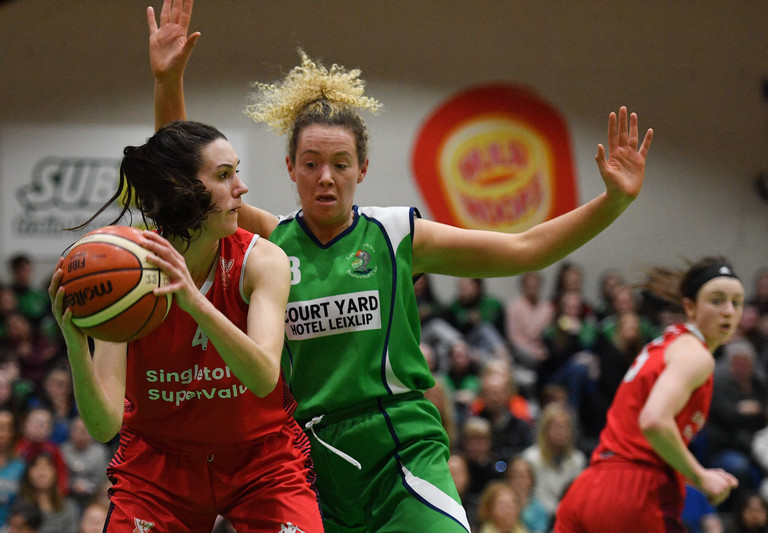 It’s hard to celebrate when your teammate’s going off in an ambulance. Not to take from the achievement, we’re delighted to be league champions, but I think it was a couple of minutes after the game ended when we decided to celebrate a bit.

We were regular season champions last year, so to be able to do it two years in a row, backing up our Cup final in January, makes it a brilliant season, but we hope to continue.

Indeed despite the Cup and league titles now firmly winging their way to Kildare, there is still silverware up for grabs, with all teams now vying for top six spots to qualify for the Champions Trophy play-offs. Here, the battle for the remaining five positions is certainly a dramatic one, with DCU Mercy and all three Cork Super League teams – Ambassador UCC Glanmire, Fr Mathews, Singleton SuperValu Brunell – in the mix, along with Maxol WIT Wildcats and Pyrobel Killester.

Killester, who currently sit in seventh position certainly laid down a firm marker of intent with a big 81-83 point win over Fr Mathews on the road, while DCU Mercy had 32 points to spare over bottom side, NUIG Mystics, in their road win on Saturday. Elsewhere, Brunell edged Wildcats on Saturday evening in a thriller in Cork, 83-73, while Elaine Kennington was the hero for Kilkenny’s Marble City Hawks as she scored a late winner to overcome derby rivals, IT Carlow Basketball, 68-66 on Friday evening.

“I wouldn’t swap this feeling for the world right now,” were the words from Maree Women’s Division One head coach, Joe Shields, meanwhile on Saturday evening as they were crowned Division One champions following an incredible first season back in the league that has also seen them complete a league and Cup double and secure promotion to the Women’s Super League for the 2019/2020 season. 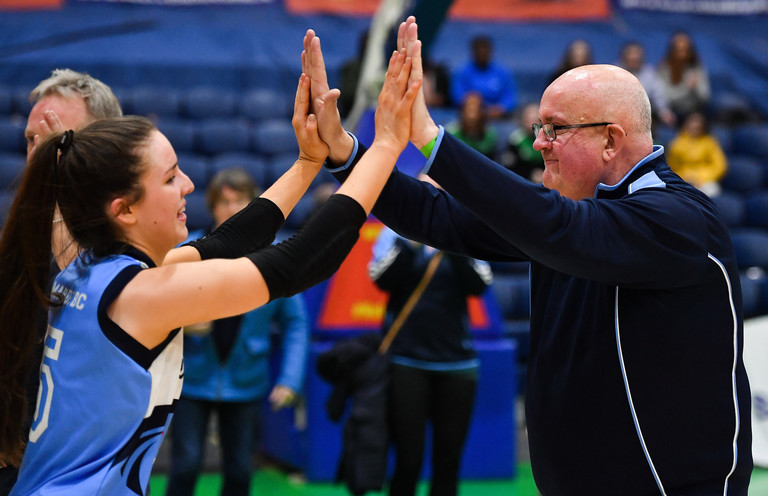 The Galway team finished out the regular season unbeaten on Saturday with a win over Phoenix Rockets at home and will now be aiming to make it a treble title win in the play-offs. Shields continued:

It’s a fantastic achievement for us, we went unbeaten. We went into the season in to the great unknown, not knowing what was ahead of us but I wouldn’t swap this feeling for the world now.

The twists and turns at the top of the Men’s Super League table continue apace meanwhile, with league leaders, Templeogue keeping their spot at the top intact thanks to a 67-89 point win over Dublin neighbours, DCU Saints on the road on Saturday evening. Garvey’s Tralee Warriors remain hot on their heels though as they travelled to Belfast with a bang on Saturday evening, running out 68-80 point winners over hosts, Belfast Star.

Warriors boss Pat Price had this to say after the win:

At this point in the season, it’s results first, and then we’ll analyse the performance after. Star were similar today to what they were against Neptune last weekend, in that they didn’t have a great first half and then came out and shot the lights out in the second half.

We just had to withstand it, if we were head-to-head at half time and they came out and did what they did, we would have lost the game. Our first half really stood to us, and down the stretch we took care of the ball enough to finish it.

We’re trying now not to look at the table too much as what happens outside of our team is 100 per cent outside of our control. We’re process driven and we were focused on these guys tonight, and then we’ll turn the page and look at next weekend. There’s a lot of basketball to be played. It’s going to be a long month for teams.

Elsewhere, UCD Marian are still in the chase for league honours thanks to a high-scoring 76-101 point win over Keane’s SuperValu Killorglin in the kingdom on Saturday evening, while it was a weekend of mixed fortunes for Maree in Galway as they overcame rivals C and S Neptune on Saturday, 85-66, before losing out to UCC Demons on Sunday, 81-90. Moycullen remain in the battle at the bottom thanks to a 64-89 point defeat at the hands of Cup champions, Pyrobel Killester.

SEE ALSO: Injury Scare For 'Next LeBron' Exposes The Inadequacies Of A Flawed System