Griffith College Templeogue are Hula Hoops Pat Duffy National Cup champions for the third time in five years after they saw off the challenge of Dublin neighbours, DBS Éanna to win out by 10 points, 78-68, at the National Basketball Arena in Tallaght.

Lorcan Murphy was in stunning form for Mark Keenan’s side, finishing the game out with 33 points in a superb MVP performance. Templeogue had heroes all over the floor when it was needed though as with just over a minute to go on the clock in the fourth quarter, the combination of Éanna’s Josh Wilson, Neil Lynch and Daniel Heaney brought the game back to just two points and the sold out crowd were on the edge of their seats. Up stepped experience though, and Templeogue delivered, with Neil Randolph draining a huge three pointer before Jason Killeen hit a massive two from deep to build the cushion once more and, from there, they drove home to victory in style.

“It’s unbelievable!” said head coach Mark Keenan afterwards. “It was tense but it was sweet. They really came back at us hard and we looked a bit comfortable at a stage, but they really put it up to us. The guys showed a lot of metal in the last two minutes, when it got back to two points. Lorcan was unreal, Jason Killeen made big shots, Darren Townes made his free throw and I’m just thrilled for the lads. It’s brilliant for the lads and the club. Fair play to both teams but our experience probably stood to us in the end.” 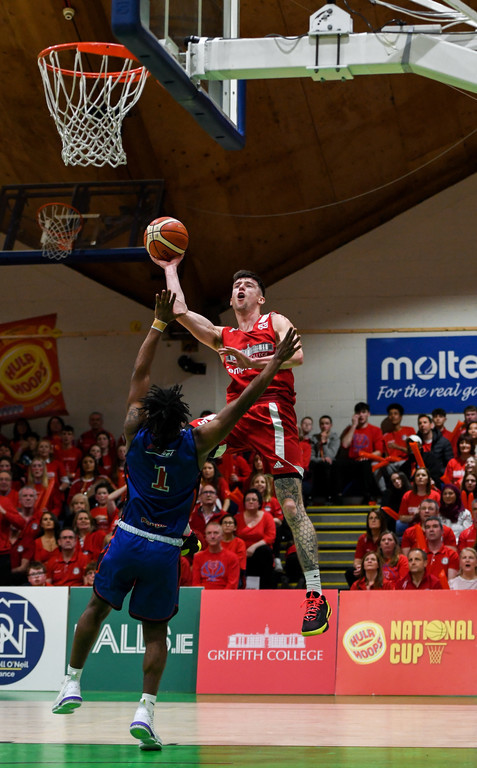 The first half was truly the Lorcan Murphy show, as the talented Templeogue player went in at half time with a whopping 28 points to his name. Templeogue led the way from early in the first, with Darren Townes, Jason Killeen and Murphy all bagging early scores. Mark Reynolds was the standout scorer for Éanna at the other end, hit the first six of their opening points, but another Killeen jump shot and a superb steal and score from Townes sent Templeogue into a 8-15 early lead. Brilliant work from Éanna’s Joshua Wilson saw the gap narrowed as he drove home a great lay up, and this was followed up by a well-taken score from Neil Lynch to close the gap back to two points. Murphy stole the show as the quarter ticked down, knocking down another six points, and despite scores from Stefan Zecevic and Reynolds once more, Éanna trailed 19-24 at the end of the first.

Murphy continued his explosive form as the second quarter got underway as, after a Killeen jump shot got Templeogue straight off the mark, Murphy added the next eight points to round of a 10-0 run for Mark Keenan’s charges. Reynolds broke the deadlock with another well-worked scores, and added another moments later. Éanna built on this momentum, and added to the run, with Wilson and Zecevic knocking down big scores to close the gap right back. Again it was Murphy who was on hand to stem the tide, running home a quick four points, while a massive Neil Randolph three pointer followed. Neil Lynch replied in kind at the other end just before the half, but it was Templeogue who still held the lead 31-44. 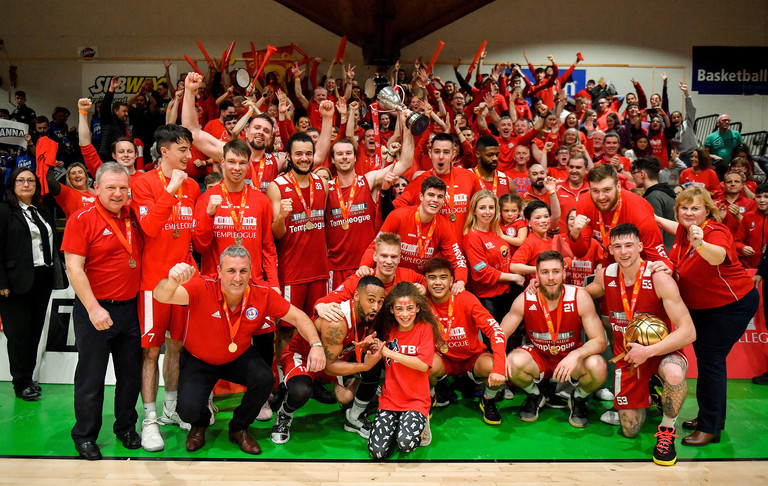 Reynolds opened the scoring in the third quarter for Éanna but Stephen James drained a three at the other end, and a big Killeen jump shot put yet more space between the teams, opening up a 33-51 point lead. Lynch was on hand to deliver for Éanna again at the other end, knocking down fantastic back-to-back threes either side of a Townes’ dunk. Wilson was also to the fore for Éanna as they tried to claw their way back in to the game, and he followed up with two super drives, before Zecevic knocked down a massive three pointer to have the Éanna crowd on their feet, and bring the game back to a nine-point battle. Heaney was on hand to drive them forward even more, scoring a big three points, but Puff Summers stepped up for Templeogue, hitting a super fade away jump shot and delivering an absolutely dagger blow just before the buzzer with a three-pointer from deep to see Templeogue into a 54-63 point lead going into the last.

Scores were at a premium in the early stages of the fourth quarter, before Zecevic and Marko Tomic hit two nice scores for Éanna. Free throws at the other end kept Templeogue’s account ticking over and with just over three minutes to play, they looked comfortable leading 58-69. Éanna were not done yet though, and a big Lynch score, followed by a great Wilson basket and bonus score edged them closer. A huge score from Heaney, followed by a free throw suddenly had the game on a knife edge with just over a minute to play, Éanna now trailing by just two points, 67-69. Randolph and Killeen stepped up to the challenge in style though, with Neil landing a huge three moments later before Killeen followed up with a deep two and from there, they pushed on to win by 10 in the end.

Meanwhile history was  made at the National Basketball Arena as Tradehouse Central Ballincollig became the first team to win three consecutive President’s Cup titles this afternoon with a superb 73-67 overtime win over IT Carlow Basketball in a thriller.

Despite the fact that Ballincollig came into the game as overwhelming favourites, Carlow did an incredible job of pushing the undefeated league leaders the whole way through to the end. Led by Kevin Donohue, the heavy underdogs managed to fight all the way into overtime before coming out on the losing end by just six points. Ballincollig only managed to put breathing room between the two sides in overtime, which started with a bang as Andre Nation had a huge alley-oop dunk to bring the Ballincollig fans to their feet. The Cork side continued to find scoring more easily and had built a six-point lead before Duane Harper scored a huge three to get it back to a one-point game with 2.27 remaining. With the game in the balance it was Andre Nation yet again who stepped up with a massive three-point lead to give Ballincollig a six-point lead. As the final minute counted down it was Ballincollig’s defense that came out on top as the President’s trophy headed to Cork for the third consecutive year.

“That was exhausting!” said Ballincollig boss, Kieran O’Sullivan. “Credit to IT Carlow and their coach Martin, they did a great job on us. We showed great resilience, experience and shined through when it mattered. There were clutch plays from Ciaran, Ronan and Andre that took us over the line and we’re absolutely thrilled to get three in a row. Finals are for winning and we got over the line - we have played in three finals and probably under performed in them but still managed to win them all.” (full report attached)

Gaming
20 hours ago
By Sean Meehan
Insane Fourth Quarter Settles Bizarre Tune Squad And Monstars Contest
GAA
1 day ago
By PJ Browne
How 2016 All-Star Mary Hulgraine Travelled To Hell And Back
Basketball
2 days ago
By Gary Connaughton
A Year On, Take Our Ultimate 'The Last Dance' Quiz
Previous Next