The Dwyer Sisters Explain Their Bond In Basketball

“I’ve retired now from playing but when you think back on it, so much of my basketball career history, Gráinne is always by my side.” Niamh said.

“I have tried to cut her out of pictures, but the parents have stopped me doing it! Every time I think about growing up in the Pres, we are always there together. I’m a couple of years older than Gráinne, so she always played up. Every time we are there, we have pushed each other up all the time. We are still pushing each other, but the one thing I’ll say is we would be at practice together and even when we were younger we would go at each other. We’re very similar in our competitiveness, but when you’re on the court with someone like that I just know we have each other’s back and you know there’s somebody who is going to go that extra mile if it’s going to help that team, going to help you and we have that support of each other.”

Raised in Thurles, Tipperary, the Dwyer’s grew up playing camogie before they took a shine to basketball. Gráinne admits that Niamh was the catalyst for her to play the game.

“To be fair, I’ll give her a compliment, she really did inspire me and I used to look up to her a lot. I had two players that I loved watching when I was growing up. One was Kim Fitzpatrick, I thought she was the cleverest cat on the court, she was just so smart and the other was Niamh. It has been brilliant playing with her. The one thing I can say is, whatever happens on the court when we actually step off the court or a few hours later, it’s all left there.”

Their time together at Glanmire yielded several league titles and National Cups and Gráinne put it down to everyone on the team having the same will to win. The rivalry between Glanmire and DCU Mercy was always hot. Niamh remembers one semi-final in 2009 against DCU Mercy very well. 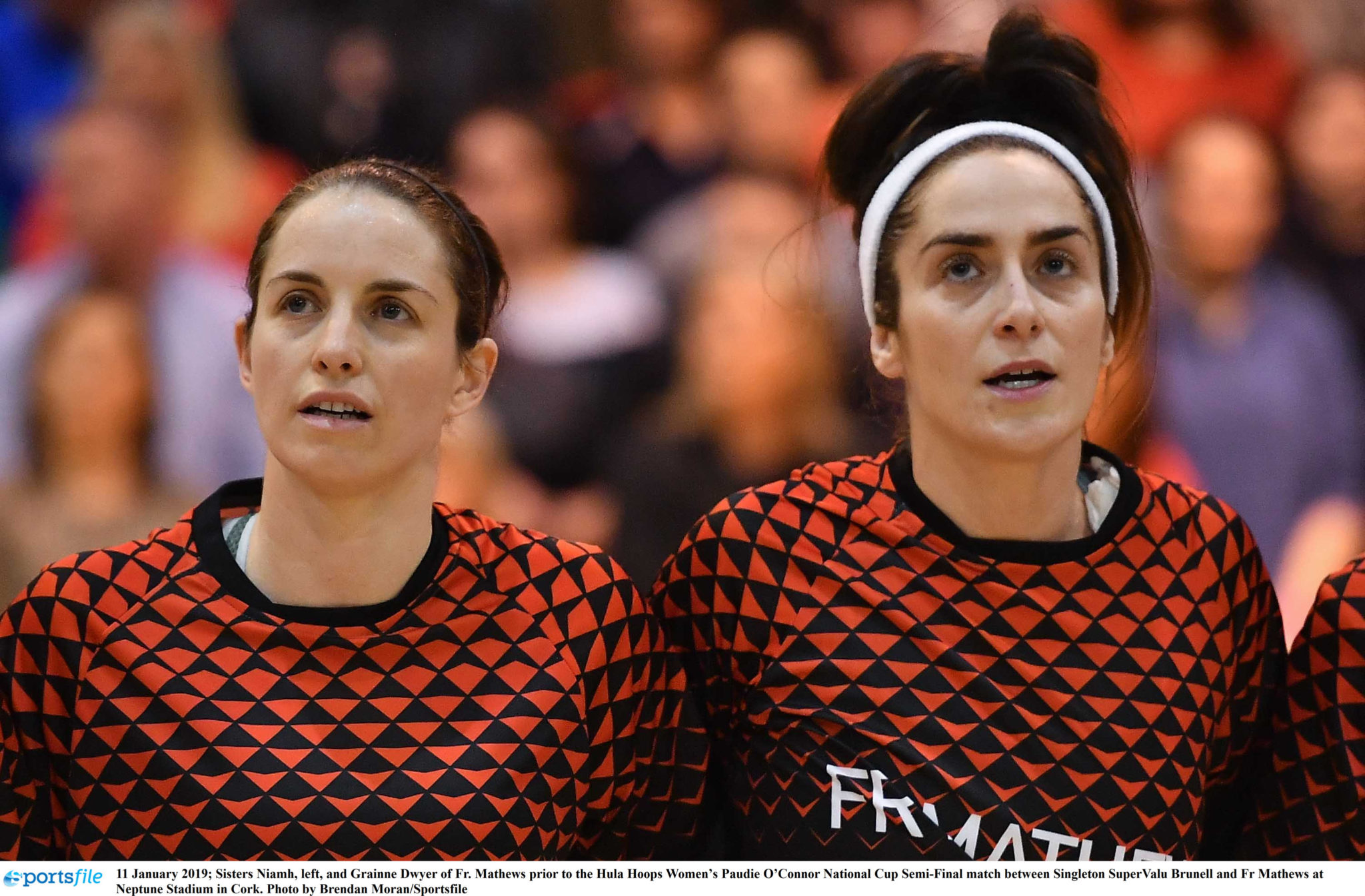 “It was the atmosphere. It was like two teams that were going out to stop each other. That’s what it was. It wasn’t the best basketball, but we’d known each other so well at this stage. In 2008 and 2009, we had played each other about four or five times. We knew each other so well. Lindsay (Peat) knew me, I was marking Lindsay and Mary Fox and I just knew their game and they knew mine. Sometimes you need a bit of luck. You talk about history and all that and sometimes you just need the rub of the green. Jill Martin, the American at the time was superb, she had 33 points in that game and she missed in regulation to send it to overtime, you need a rub of the green. We won by 1 point.”

Niamh Dwyer is now a coach with Fr. Matthews basketball club. It began after she’d joined the club as a player, but was unable to play due to injury and was eager to make an impact. Gráinne admits it was a challenge to adjust to having Niamh as a coach, rather than just a teammate.

“This is my third season now, so Niamh had been putting in a lot of work with the coaching. So all our training plans for the two years I was there, so I would have always known what she was looking for, that she wanted in training. You know she was trying to find a balance too between coaching and playing when I came and I think that was my biggest struggle. So I played with Niamh for years before - but I got Niamh the player - so now I have to come in and meet Niamh Dwyer the player/coach. I think we nearly went to fisticuffs one night!”

The European Games in Baku in 2015 is Niamh and Gráinne Dwyer’s proudest moment to date. Representing their country, the atmosphere, experiencing the athlete’s village and playing the style of basketball that they both love, 3x3. The game has a bit of everything, fast-paced and mistakes are welcomed.

“In a heartbeat, if they said 5x5 or 3x3, I would say 3x3. It’s just phenomenal.” Grainne said. “The adrenalin is unreal. The intensity, the quickness of the game. You talk about making mistakes. You make a mistake every second of that game and you just keep playing and its onto the next. You don’t have time to think. Its just so much fun, enjoyable!”

“I agree, I love 3x3.” Niamh added. “You can read the game. There’s not many set plays, there’s a 12 second shot clock so it’s all about how you can apply and read the game so it’s really important. The best thing about it and why young people should play is because we have so many players that make mistakes and let it drag them down for the next 20 or 30 minutes. As Gráinne said, when you’re playing 3x3 you’re going to make mistakes constantly. You won’t remember them because you just have to move so quickly.”

The Dwyer sisters have played with some remarkable players down through the years including previous Bench Talk guests Michelle Fahy and Lindsay Peat and they spoke about Niamh’s international career in 2009, but when asked about when that next wave of basketball superstars similar to “09 will come, Gráinne recounted on her own experience whilst speaking to Bench Talk host Jacqui Hurley.

“I have been fortunate enough to have been asked to play with senior teams since I was 17, 18 and I think that’s the one thing that I’ll say about Irish basketball at the moment you know. I never went abroad, I didn’t go down the professional route. I stayed at home, but every summer I came onto an Irish team I got to play with the likes of all these players. The Susan Moran’s, the Michelle Fahy’s, the Niamh Dwyer’s the Siobhan Kilkenny’s, the list is so long. So long! I think you can have great coaches and you can have great leaders on the floor, you get into a mix with people with that mentality. The experience I picked up from them girls from just playing with them, being around them, how they composed themselves, what an Irish team should be, structures that would have been put in place by your coach, but every one of them had their own individuality. You could see them always shine!”

Niamh Dwyer, who is now retired, has experienced playing professional basketball and playing abroad. She has some advice to those players given the opportunity to travel and play.

“For me, to anyone that is thinking of doing something, it worked out for Gráinne (staying at home), she has had a hugely successful career but for me my mantra is you’ll never regret anything you try. Even if it doesn’t work out. You know, I was abroad and I loved my experience but it didn’t always work out. When I went to Lithuania I found it extremely difficult, it was a very high standard. I found it hard, remember there was no smartphones now or anything like that. School would take up a lot of time as well and a lot of down time as well and I didn’t manage all of it well, but I don’t regret doing it. It wasn’t the best basketball experience of my life, but it made me stronger as a player and a person.”