"I Don't Care About That Today, I Care About Kellie Winning Her Olympic Gold Medal!"

On the 8th of August 1992, Michael Carruth took gold for Ireland in the men's welterweight division of boxing at the Barcelona Olympics - 29 years later, Kellie Harrington followed in his footsteps this morning in Tokyo.

Michael Carruth spoke to us at Balls in the moments after Kellie Harrington took gold this morning. The 1992 gold medalist was full of praise for how Harrington approached the fight, and the resilience she showed in fighting back after a first round loss.

Then she came back superbly in that second round, she boxed beautiful in that second and third round. She showed her class and she showed what she's about. From being down and coming back and winning on a unanimous decision, absolutely unbelievable achievement. 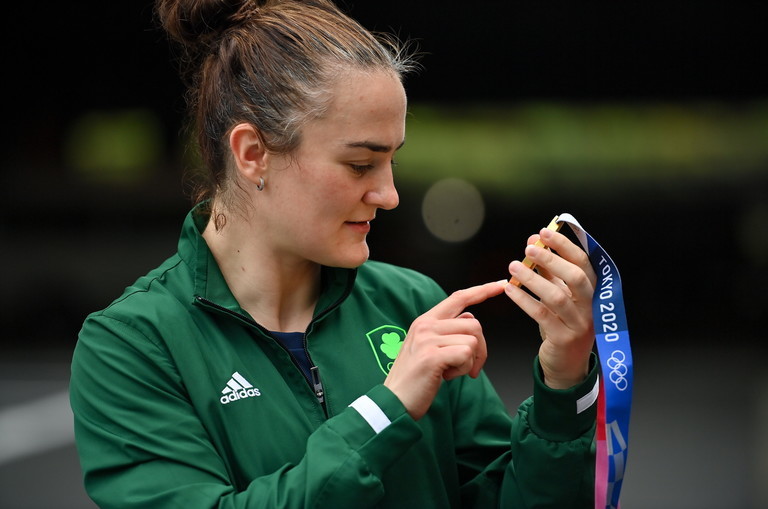 8 August 2021; Kellie Harrington celebrates with her gold medal after victory over Beatriz Ferreira of Brazil. Photo by Brendan Moran/Sportsfile

The scenes at Portland Row, the northside Dublin street where Kellie Harrington is from, were one of the highlights of this morning's coverage. The Harrington family were one of the unsung stars of the Olympics for Ireland, and Carruth revealed he visited the family yesterday to check in on them.

We were over yesterday, myself and my brother Fergal. We were hoping that no media were there, we just wanted to go in and have a chat with them and see how they were themselves. Obviously the nerves were very high then, I can imagine what it was like fifteen minutes ago! 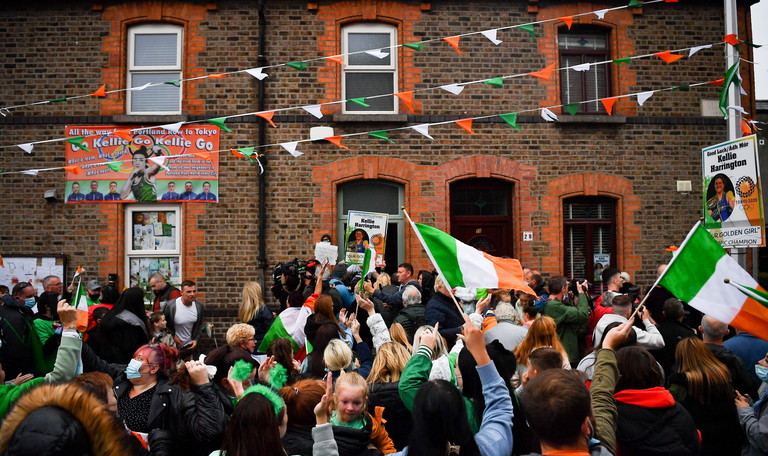 8 August 2021; Neighbours of Kellie Harrington's family, from Portland Row in Dublin, celebrate after watching her on a big screen when she won her Olympic final. Photo by Ray McManus/Sportsfile

This was Harrington's first ever Olympics, but she follows in the footsteps of London 2012 gold medalist Katie Taylor. It has, at times, been tough for Harrington, as she has sometimes been overshadowed by Taylor - but Carruth thinks this triumph is just rewards for her years of excellence.

Kellie has been, over the years, in the shadow of Katie, and rightly so, Katie was unbelievable in her career. But, it's great that Kellie gets her moment now, a well deserved moment.

She's an absolute role model for any young person out there. Any kids out there who want to join boxing clubs - look at Kellie and look at Katie. They're two prime examples of what boxing's about. 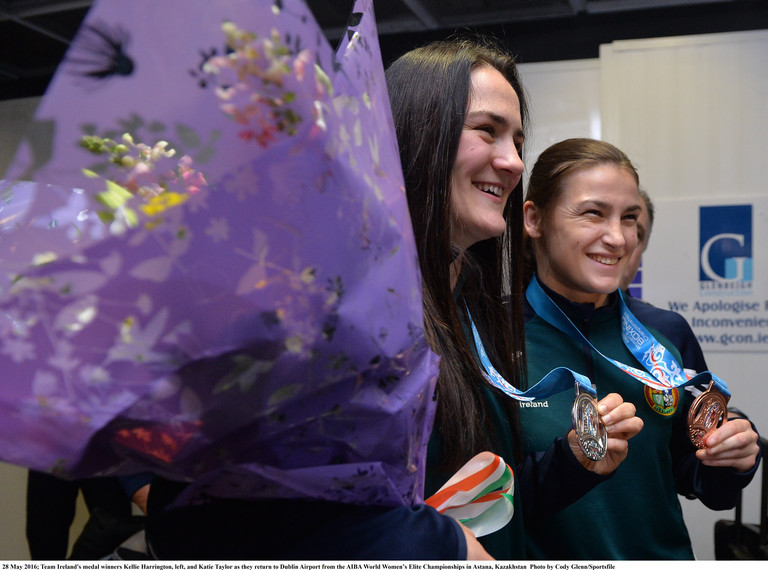 28 May 2016; Team Ireland's medal winners Kellie Harrington and Katie Taylor as they return to Dublin Airport from the AIBA World Women's Elite Championships in Astana, Kazakhstan. Photo by Cody Glenn/Sportsfile

Carruth's gold medal in 1992 was the first ever in boxing for Ireland at the Olympics. His victory preceded a period of success for Team Ireland in boxing.

Harrington's gold was the ninth Olympic medal in boxing for Ireland since the turn of the century, and she follows in the footsteps of Katie Taylor as a gold medalist at the lightweight division. Winning her gold medal on the anniversary of Carruth's triumph in Barcelona was not the only similarity that the '92 champion noted this morning.

I was fighting a 6'3" Cuban, he was a big guy. I kind of put the pressure on the Cuban saying 'of course he's gonna win, I'm gonna lose'. I wasn't meaning that.

Kellie and me have huge similarities - every day that we boxed, she boxed on the exact same, today is the anniversary, 29 years of me being Olympic champion. And I don't care about that today, I care about Kellie winning her Olympic gold medal!

It's been phenomenal just looking at her over the last couple of fights as well, she's nearly done everything the same. She had to change her style there today somewhat after losing the first round but, as we said, it was a superb performance by her.

You can't have any doubt about it - she is Olympic champion and it's well deserved.

It was another successful Olympics that also saw a bronze medal for Aidan Walsh, and impressive performances from the likes of Kurt Walker. 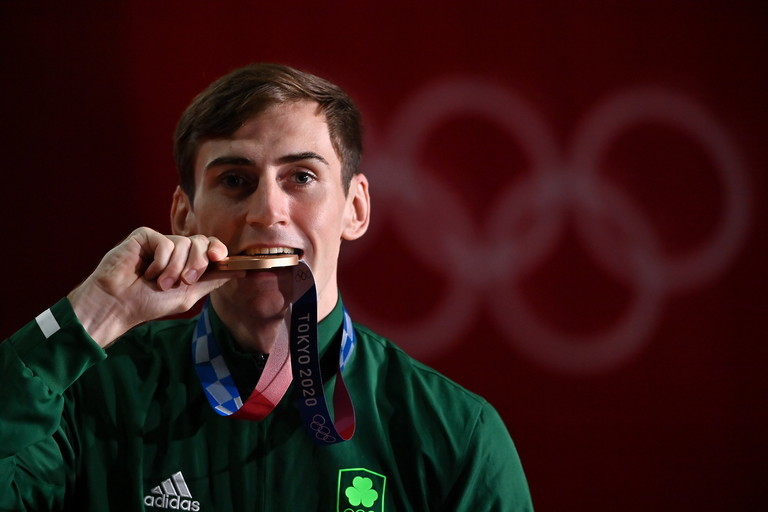 3 August 2021; Aidan Walsh with his bronze medal that he won in the men's welterweight division at the 2020 Olympic Games in Tokyo, Japan. Photo by Brendan Moran/Sportsfile

Carruth thinks that the relevant sporting bodies should make sure to look at how boxing is funded in Ireland, to ensure that the new wave of interest in boxing reaps rewards in years to come.

You look at how many kids are gonna try and join boxing clubs - unfortunately the way things are with the pandemic, we're not allowed take in any new members and stuff like that, so it's really a hard time for us as well. But, you'd like to think that kids will wait and join some boxing clubs when we can get back to some sort of normality.

It's been a special few years for Irish boxing at the Olympics and, as Michael Carruth rightly says, Kellie Harrington is the role model champion.

Her gold medal is the shining light in what has been a fantastic Tokyo Games for Team Ireland. 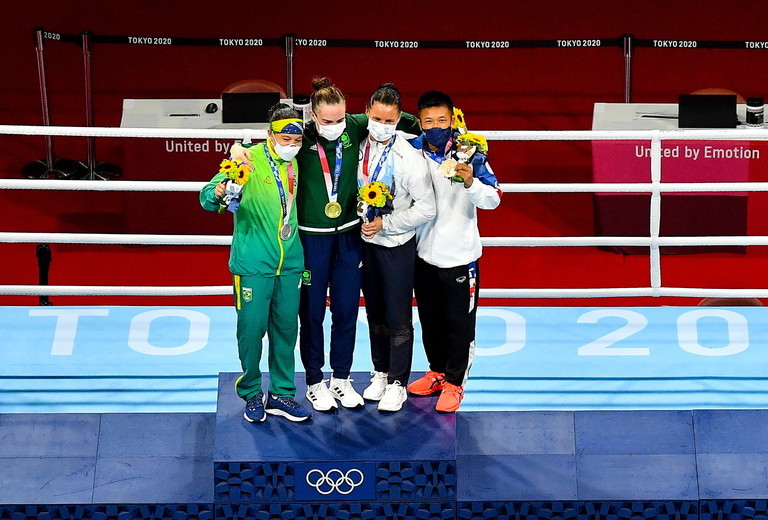 Boxing
4 months ago
By Andrew Dempsey
'Less Stress, More Success': Kellie Harrington On Staying Amateur
Boxing
5 months ago
By Eoin Harrington
Kellie Harrington: Fair City In Tokyo, Tourism In Portland Row, And Going Pro?
Olympics
5 months ago
By John Dodge
The State Of Play For Irish Olympic Sport - How Are We Fixed For Paris 2024?
Popular on Balls
Snooker
2 days ago
By Gary Connaughton
Ronnie O'Sullivan Couldn't Get Over Stunning Mark Williams Escape Shot
32