If Ray Moylette gets to the Olympics - he will have got there the hard way. At around 9 o'clock tomorrow night (Irish time) in Vargas in Venezuela, Moylette step into the ring against Hovhannes Backrov of Armenia. Moylette only needs to win two fights in Venezuela to qualify, but nothing is ever straightforward for the 26-year-old Mayoman.

Moylette is not too worried about the Zika virus. He's had to pay someone to take over his Stingray fitness business in his native Westport while he puts it all on the line to get the chance to go to Rio. A chance he thought might never come. There might not be a more popular athlete in Mayo than Moylette - earlier on today he was even mentioned from the pulpit in Knock!

A few weeks ago he thought he was going to fight Dean Walsh in a box-off to go to the penultimate Olympic qualifier. Moylette and Walsh had previously met in the last two National Elite finals - with controversial decisions going in Walsh's favour on both occasions.

But Zaur Antia and his team decided to call that proposed fight off with 48 hours notice and to base their decision on a Azerbaijani training camp instead. After the camp, the coaches chose Walsh - who subsequently took part in the qualifiers in Baku but was unsuccessful.

That meant that Moylette got a last-minute reprieve. Had Walsh qualified - the Wexford man would have taken the last slot available. But after Walsh was eliminated - Moylette's eligibility for the very last qualifier - because he took part in the AIBA Pro Boxing series - kicked in. Walsh didn't have that option. 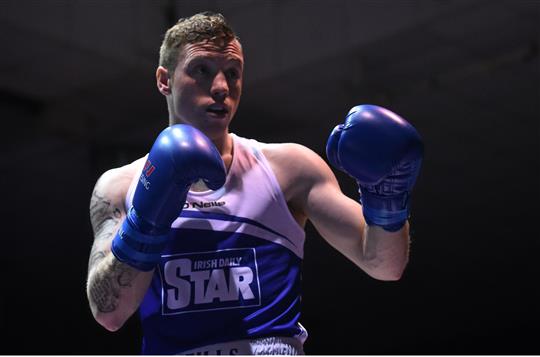 But even then - it's not a straightforward Olympic qualifier for Moylette. This is the first ever Olympic qualifier that professionals are eligible for - and even though he only has to win two fights to qualify for Rio (three out of the seven boxers at Moylette's 64kg light-welterweight division qualify) he might have to face one of two experienced pros to get to Rio.

Italian Massimiliano Ballisai doesn't look to be a world-beater as he's aged 31 and has a record of 20 wins and three losses. But the Paraguayan professional, Carlos Manuel Portillo, is unbeaten in his 18 fights so far, is the national champion of Paraguay and could be anything.

But two wins... That's all he needs. 18 minutes in Venezuela to decide Ray Moylette's Rio dream and become the ninth and final Irish boxer to qualify.

Moylette's career has been a rollercoaster - as he told Balls.ie in an explosive interview a few weeks ago.

The only person that can beat me... is me. I know I've been very up and down – I've won European gold but lost in Mayo championships. My whole career is up and down. But I know at my best there is no-one who would beat me.

Moylette landed in Venezuela on Thursday - and certainly arrived with a bang.

Moylette is not lacking in support from his fellow boxers either...

@raymoylette good luck ray! Remember if you don't do the business you don't get your rope back 😀

H/T: Sharon McGing for setting us straight on the times! Cheers Sharon

Boxing
1 week ago
By Colman Stanley
Behind The Scenes Footage Captures Great Moment Between Katie Taylor And Canelo
Boxing
1 week ago
By PJ Browne
'Nobody Has Stood Up And Taken These People To Task. It's A Disgrace'
Boxing
1 week ago
By Gary Connaughton
Katie Taylor Shared Touching Moment With Muhammad Ali's Daughter After Serrano Win
Popular on Balls
Rugby
2 days ago
By Colman Stanley
'That Pace, That Intensity, That Organisation' All Black Legend Has High Praise For Leinster
GAA
2 days ago
By PJ Browne
Cusack Has Little Sympathy For Gearoid Hegarty After Red Card
Football
17 hours ago
By Colman Stanley
Wagatha Christie Trial Sheds New Light On England's Euro 2016 Disaster
GAA
23 hours ago
By PJ Browne
GAA President Explains Why Tailteann Cup Won't Be All-Ireland Curtain Raiser