Boo Boo Andrade: Quigley Must Be "A Warrior To Step In the Ring With Me"

With just over two weeks to go until fight night, the anticipation is building for Jason Quigley's WBO middleweight title bout in New Hampshire.

His opponent on November 19th is decorated champion Demetrius Andrade. At 30-0, many have called for him to fight the likes of Gennady Golovkin and Canelo Álvarez.

Quigley himself spoke before about people avoiding Andrade and his style of boxing. "I think that they're threatened by his style and his technique," the Donegal man said.

"The likes of Canelo and Golovkin are avoiding him because they're using that excuse that he's not a fan friendly fighting style."

"But deep down, you know,  If I was Andrade I'd be disappointed that he hasn't got a crack at those big names yet."

Andrade spoke to Ring IQ on a Youtube livestream recently and said the GGG fight was in the works. "We tried to get the Triple G fight before," he said.

"He went and wanted to do a unification bout. That's what he's doing." Many have called for him to go up to super middleweight if he manages a win this month.

Regarding his fighting style, Andrade doesn't think it's the reason he's not getting the big guns. "I think that's just an excuse. At the end of the day, we're in here to fight."

"I mean at the end of the day, I can't fight Deontay Wilder or Anthony Joshua. I mean, I would love to. That's a payday," he said.

"I can't hang with those guys who are 6"7, and stuff like that. Everything is a strategy in this sport, it's a business as you can see."

He continued. "Everybody gets to cherry pick the guys that are washed up, haven't fought for two years. It's much bullshit."

The Threat Of Quigley

Quigley believes not only will Andrade be a unique fighting style for him to endure, but that he'll pose a different threat compared to Andrade's previous opponents.

The American has experience fighting boxers from overseas, and even from Ireland. In January of last year, he managed a TKO victory over Irishman Luke Keeler.

When asked about Quigley, Andrade was impressed that he took the call. "Quigley is an Olympian. Quigley's 20 something with 1 defeat."

How does the WBO middleweight champion see the fight playing out? "I'm not too sure what I'm going to do this time," Andrade said.

"People will be like, 'Woah, holy shit, I gotta start working on that shit again.' You can actually watch and learn and see what type of tools your boy has."

"It's going down, come in there to make statement of course and to be like. 'I want a paaaydayyy, paaayydayyy.'" 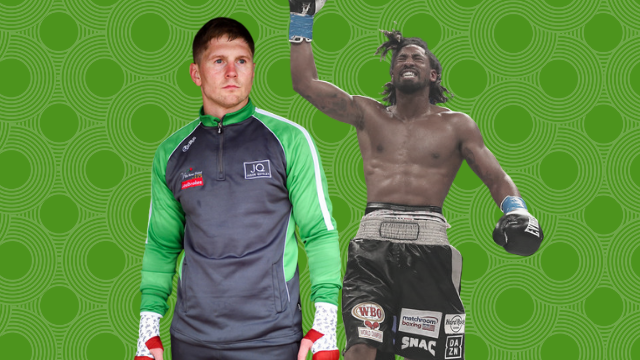