Barry McGuigan says he will never get over the death of his daughter two-and-a-half years ago. Aged just 33, Danika McGuigan, an actor, died in July 2019 after a short battle with colon cancer.

"It's been shocking, the saddest things I've ever had," former featherweight world champion McGuigan said on RTÉ's Tommy Tiernan Show.

"I'll never recover. My life will go on, but I'll never be the same. Family was everything to me.

"She was such a great kid. She had a tough life. She had fever convulsions at nine months, she was dead on arrival at hospital, and they got her heart going again.

"She had leukaemia at 11, and they said she'd never get through it, and she got through it. I was making a movie in Dublin with Jim Sheridan and Daniel Day Lewis called The Boxer. I was called off the set.

"Five months before that, she had been on the set, up at the other side of town in one of the crowd scenes, and she just loved it. That affected what she wanted to do with her life when she got to her teens.

"I'll never recover from that. Losing my child... I lost my brother, he committed suicide at 34. My dad died at 52. My sister died just last year. They're all bad. Dad, it was very difficult to get over that, and Dermot was particularly bad, but losing your child is just the most shocking, shocking thing."

McGuigan said the family had very little notice that Danika's condition was so serious.

"She'd been working on a movie with Cathy Brady," he said.

"We didn't know there was anything wrong. Then she complained about pains in her tummy. We did bloods at the end of April, and they all came up clear.

"Then, in June, she said that the pains got bad, and she actually said, 'I'm going to go in and get checked myself'. She went in and all hell broke loose, straight into the hospital, in the doctor, and all the bad news. She died five weeks later. Five weeks, just like that, it was shocking."

McGuigan added that having four grandchildren helps take his mind off the sadness which he and his family have endured.

"Of course you have emotion," said McGuigan.

"Emotion is part of the game. Sorrow and sadness outside of the ring happen all the time. Most of the kids that come into boxing, come from difficult backgrounds where there is a lot of sadness and a lot of sorrow. In many ways, boxing gets them out of that.

"People cry, and fighters cry, but it doesn't mean that they're any less of a man or any less of a fighter because they cry. The night I won the world title, I cried." 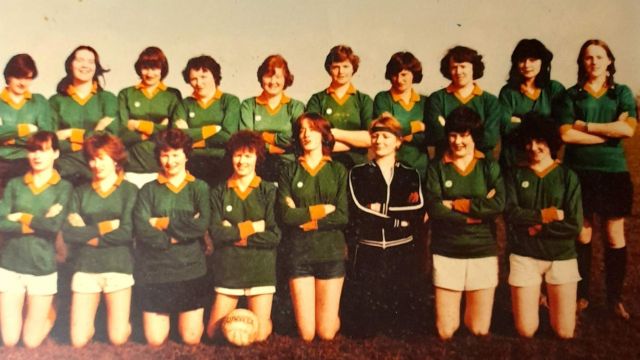 Boxing
5 months ago
By PJ Browne
'There’s A Number Of Options Available To Her. It’s Entirely Up To Kellie'
Boxing
4 years ago
By PJ Browne
Joe Brolly Did Not Like RTÉ's Apology For His Comments About Barry McGuigan
Boxing
4 years ago
By PJ Browne
RTÉ Apologise Over Dunphy And Brolly Comments About Barry McGuigan
Popular on Balls
Basketball
22 hours ago
By Eoin Harrington
Kieran Donaghy And Tralee Warriors Claim National Basketball Cup Title In Tallaght
Football
1 day ago
By Gary Connaughton
Carragher Reveals Unhappy Instagram Message From Lionel Messi After MNF Comments
The Rewind
1 day ago
By Gary Connaughton
Quiz: From Which Irish County Did This Company/Product Originate?
Football
2 days ago
By Jonathan Byrne
Women Footballers Call Out 'Embarrassing' Sun 'Exclusive'