Aidan and Michaela Walsh were two of the stars to emerge from Team Ireland during Olympics last month. Back home on home soil, both Walsh siblings are happily readjusting to life after Tokyo.

"It was nice just to live like a normal person for awhile," said Michaela "It took so much to get to Tokyo."

"It was great to finally come home and sit down and have a cup of tea and a bar of chocolate." Brother Aidan was also grateful for the perks of being at home.

"We stopped in the Applegreen on the way up and we got a burger," he said. "Aw, it was lovely. A burger, chips and barbecue sauce. I eat barbecue sauce with everything."

"Just your home comforts, you take for granted really. The food in Japan was lovely. But you can't beat a nice dirty burger filled with grease and everything."

There was no doubt that Michaela and Aidan had earned a splurge or two. As the curtain has closed on the Tokyo games, Michaela knows some things won't be the same at home.

The pair are back in Belfast and trying to adjust to the new normal.

"There's a great buzz about the club," she said, of Monkstown Boxing Club in Newtownabbey. "In a way you're sort of seen as a celebrity even though we're not, we're just normal people."

"I was up training last night so I was, actually." No rest for the wicked. Michaela has set her sights on the upcoming Irish Elites after a very close Last 16 bow out in Tokyo.

Meanwhile, Aidan's bronze medal has undoubtedly brought much joy to the locality. "To back there with a bronze medal and back to my club, it was amazing," Aidan said.

"It was something that I had always pictured in my head, even from a young age." Aidan remembers Paddy Barnes and Michael Conlan's homecomings, as well as local man Hugh Russell.

"Now that I've got back, I've realised that it does change your life," he added. "It's something that the future kids in Belfast, in the boxing club, they're going to be wanting to achieve this here."

Father Damien and other local volunteers

The pair are ambassadors for 2021 Federation of Irish Sport Volunteers in Sport Awards. Their Dad, Damien, has been a vital part of their local Monkstown Boxing Club.

The awards recognise, champion and support the army of 450,000 volunteers in sport and physical activity in local communities in Ireland. Aidan and Michaela know how important they can be.

"My Dad has been with us from the very start," Michaela said. "You miss out on your own kids lives and special occasions and that to give up time to help other children, which is massive."

"I wouldn't be at this level, not only for my father but for other volunteers. It's great that we get to recognise them and everyone around the country."

"Not even a local boxing gym, a local health gym in your area. Volunteers that do come into school and also help out in the boxing club. It's amazing, seriously amazing."

Aidan suffered an ankle injury after a victory leap in reaction to making the Olympic semi-finals. He says the rehab for the ankle has gone well.

"All better, all better," he said. "A lot of physio on it. It's probably better than what it was." He was asked if he wanted to continue to push on for silver or gold.

"I wanted to fight. It's an Olympic games. In my head, I'm saying to myself, I maybe will never ever get the chance to fight in an Olympic semi-final again."

"I wanted to push on, but it was physically impossible," he admitted. "I was hoping that I was going to be able to go in and fight. I was told to withdraw from the contest."

Looking ahead to Paris

Performances at Tokyo aside, both Aidan and Michaela are now looking onwards towards the World Championships, the Commonwealth Games and of course, Paris in 2024.

"The Commonwealths is next year. After that, it's the Olympic Games, It's great to have a big tournament in the lead up to the Olympics. Three years, it'll go by quick so it will."

Aidan is also looking ahead to the major tournaments, but knows how difficult the competition is in Ireland alone. He said he'll be happy to be on another Olympic team come Paris.

"I've only entered two other National Elites. It just shows you in a short period of time and how things change. If you get complacent, your spot can be taken very quickly."

"Obviously the pro game is always in your mind. But I believe there's a lot more in me and I'd hate to end the amateur journey too soon. We'll see what the next few years hold," Aidan said.

Asked if a gold medal would have changed his mind, he responded, "It's a what if question. What if I hadn't even got to an Olympics?".

Michaela's also sticking to the amateur circuit, for now. "I've looked at the pro option. Maybe if I'd medaled in Tokyo I don't know whether I'd still be in this position."

"The Olympic Games is special. It's just something that I've always dreamed of doing," she said. "Just getting a taste of that I said I want to stay on for Paris."

Michaela is a sparring partner of gold medal hero Kellie Harrington. "If Kellie had of went pro, I would have obviously respected the decision she made."

"I'm delighted that she's staying on and she's a great addition to the team. It's great to have her. The team is coming together and they're sticking together for Paris."

The future is bright

"We finished seventh overall in the Olympics, seventh in the world as a team is phenomenal to even be that high up. Obviously, we'll want to be higher again. I think Irish boxing is in a great great place."

EBS is partnering with the Federation of Irish Sport for a third consecutive year to launch this year's Volunteers in Sport Awards. More than 450,000 volunteers across Ireland ensure that sport and physical activity take place around the country every day.

Each year, this army of volunteers dedicates over 37.2 million hours of their time across the country’s sports clubs and associations. They are there to support sporting clubs and communities from early morning, to late at night, without any expectation of recognition or reward.

To nominate an everyday hero, and to be in with the chance of winning €1,000 for your local sports club, simply visit www.volunteersinsport.ie. Nominations can be made by a club, individual or sporting body and are open from September 7th, 2021, to October 17th, 2021. 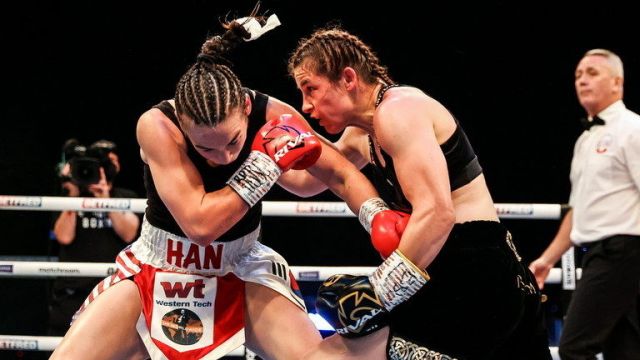 Boxing
5 months ago
By Andrew Dempsey
'I've Had To Pinch Myself' - Aidan Walsh On His Rise And Securing An Olympic Bronze Medal
Boxing
5 months ago
By Eoin Harrington
'She Deserves It As Much As I Do': Aidan Walsh On Michaela's Influence On Bronze Medal Win
Olympics
5 months ago
By PJ Browne
Aidan Walsh Forced To Withdraw From Olympic Boxing Semi-Final
Popular on Balls
Rugby
2 days ago
By Colman Stanley
Keith Earls Shares Story That Captures Andy Farrell's Decency
Football
1 day ago
By PJ Browne
'If He Continues With Performances And Goals Like That, Stephen Kenny Will See It'
Football
2 days ago
By Eoin Harrington
Quiz: Name Every Player To Score In A Champions League Final
Football
20 hours ago
By Gary Connaughton
Portsmouth Likely To Retain Gavin Bazunu This Month Despite Championship Interest