Delfine Persoon To Lodge Complaint After Loss To Katie Taylor

After a captivating brawl in Madison Square Garden on Saturday night, Delfine Persoon is refusing to lie down and accept defeat. The Belgian, who was seen leaving the ring in tears, has revealed she intends on lodging on official complaint.

After the fight went the distance, the judges' scorecards awarded Katie Taylor a majority decision victory - 95-95, 96-94, 96-94 - though many neutrals felt the Belgian underdog had done enough to give the Irish fighter her first professional career loss.

We will file a claim. Even if it probably will not help anything. We were prevented from writing a big and beautiful page in the history of boxing. Today everyone has seen and everyone knows that is a shame.

But who will remember it again in a few years, reading my record where this championship will appear in the column of my defeats?

In my eyes, it's not a defeat. I will give myself one or two weeks of reflection to decide what to do next. For many, I had no chance. But I proved the opposite.

Shortly after Saturday night's victory, Hearn, Taylor's promoter, told Balls.ie that his fighter was open to a rematch. 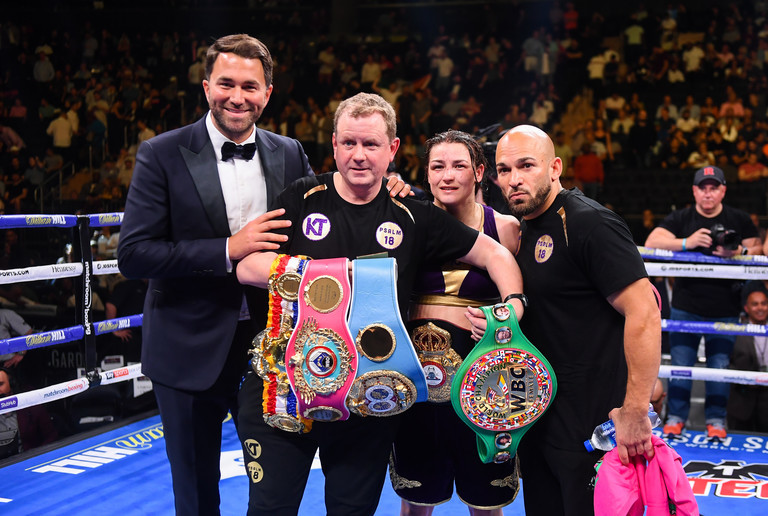 Meanwhile, Brian Peters, her manager, wasn't so keen on the idea.

We're always be open to anything. There are so many different factors that have to be taken into consideration. We will look at a rematch sure.

Would we look at it straight away? Look, we are going to do whatever suits us. So far we have done pretty good. So we will stick with our plans.

Boxing
8 months ago
By Maurice Brosnan
'The Fights Are Going To Happen. Eventually, I Am Going To Shut Them Up'
20

Boxing
6 days ago
By Sean Meehan
Katie Taylor Set To Take On Delfine Persoon In Rematch Of 2019 Classic
Boxing
8 months ago
By Maurice Brosnan
'The Fights Are Going To Happen. Eventually, I Am Going To Shut Them Up'
Boxing
1 year ago
By Maurice Brosnan
'I Think Those Remarks Are A Disgrace Really'
Popular on Balls
GAA
23 hours ago
By Donny Mahoney
New Junior Minister For Sport Allegedly Supports Mayo And Dublin
8