Jason Quigley entered tonight's world title fight against Demetrius Andrade hoping to fulfil his lifelong ambition of becoming a world champion, but it wasn't to be for the Irishman in New Hampshire.

Having entered the bout as a major underdog, he would not make it out of the second round as his opponent put on a dominant display.

It was a fairly slow start to the fight as both fighters attempted to feel out the other man out, but Andrade burst into life in the last minute of the round. He landed a couple of huge shots, knocking Jason Quigley to the canvas.

The American had previously made a habit of knocking down his opponent early in bouts but failing to finish them off. However, he seemed intent on making sure that was not the case this time.

After knocking the Irishman with another huge punch, he would finally finish the fight towards the end of the second round with another vicious blow.

It was a tough way to go out for Jason Quigley, who never managed to get into a rhythm in the fight.

While the Irishman would not fulfil his lifelong ambition of becoming a world champion tonight, he was the epitome of class after the bout. He was quick to congratulate Andrade for the victory, who in return had some words of his encouragement for the Donegal man.

The champion now moves to a professional record of 31-0 and will be eyeing some massive fights down the road. He has repeatedly accused the likes of Canelo Álvarez and Gennady Golovkin of dodging him in the middleweight division, calling them out once again after tonight's fight.

Speaking to DAZN after his victory over Jason Quigley, he pleaded for the world of boxing to cut the crap and start making the fights that the fans wanted to see.

Whatever you guys ask for, I deliver...

Line them up, that's it. I don't got to keep doing all that extra shit. You need to help me make sure I get that fight, you Chris Mannix, my boy!

Eddie Hearn needs to make sure I get that fight. The fans need to demand these fights, the fans need to stop letting these people walk away with these easy ass fights. They need to fight the best, that's all.

As for Jason Quigley, we're sure he will bounce back quickly from this defeat. 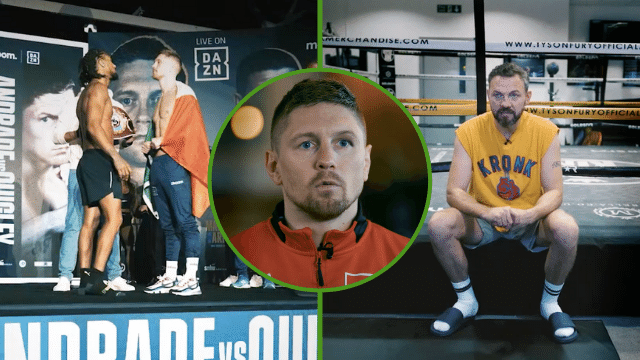