Matchroom Boxing promoter Eddie Hearn has cast doubt over a rematch between Katie Taylor and Amanda Serrano being held in Croke Park this year.

In the biggest fight of women’s boxing history, the build-up lived up to the fight as Taylor edged an absolute classic to claim a split decision victory over Serrano.

Despite a huge fifth round for Serrano, Taylor dug deep to remain undisputed lightweight champion, with an electric atmosphere of Irish fans packing out Madison Square Garden.

Following this iconic clash, a rematch seems certain, with Croke Park immediately discussed as the ideal venue by all parties after the fight.

"It was massive... One of the biggest viewed fights ever on DAZN in terms of subscriptions, in terms of viewership."@EddieHearn tells @arielhelwani that Taylor vs. Serrano was a "shot in the arm" for women's boxing 🥊 #TheMMAHour

However, speaking on a lengthy interview yesterday evening on the MMA Hour with Ariel Helwani, Eddie Hearn discussed some of the issues with having the rematch in the Bray fighter’s home country.

“She’s never fought in Ireland. There’s been some political problems within boxing, we haven’t done shows there, there hasn’t been a lot of boxing, there’s a lot of aggravation and hoops to jump through.

She’s doing so well in England and the US that we just kept on going, but every time we fight, you see the same comments.

This is Ireland’s greatest ever fighter, maybe their greatest ever sports star. How can she not fight in Ireland? She deserves it so much.”

Despite the obstacles in the way of Katie Taylor getting a dream Croke Park bout, Hearn is determined to make it happen.

“We will have to speak with the relevant people there and see if everyone is comfortable with a big show, but we’d like to do it.

"It would be a shame to go through Katie’s entire career without fighting in Ireland.”

However there are complications. Due to the vagaries of Irish weather, August is seen as the latest month that Dublin could host an outdoors event on this scale. Hearn revealed that Taylor has reached a status as a fighter where she would be only fighting twice a year. While she luckily didn’t suffer any serious injuries, a late summer turnaround would be very tight and makes Croke Park look unlikely. It would mean about a month of recovery from last Saturday's bruising event.

MSG requested for the rematch to be replayed there again, while venues in the Middle East are also being considered.

“On the flip side, MSG come back to me and said ‘guys, you have to bring the rematch back here'. We’ve had a couple of calls from the Middle East.

There’s a big movement from the Middle East right now. We did Joshua and Ruiz in Saudi Arabia, we’re talking to a number of other countries as well.”

Hearn said that Taylor would ultimately have the final call, and that Croke Park is the preferred venue.

He also added Paul's advisors had floated the idea of a twin-headliner with Taylor-Serrano II and Jake Paul v Conor McGregor but Hearn seemed to think that was unlikely for a number of reasons. 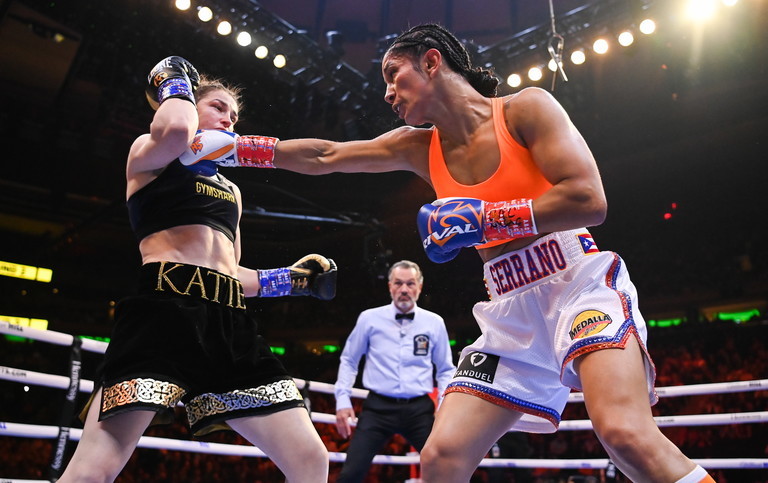