'There Have Been Many Lives Saved Through Boxing': Calls For Increased Funding After Tokyo Glory

Lee turned professional after the Olympics in Athens in 2004, and Egan famously won light-heavyweight silver at Beijing in 2008.

"It's a challenge to whoever is in control to fund boxing in Ireland," Lee told RTÉ Sport. "Boxing thrives in disadvantaged areas."

"It needs support because there have been many lives saved through boxing. So if you keep investing in boxing you're going to see the returns."

Lee and Egan foresee a huge uptake in younger people taking up boxing in light of the Irish performances this year, most notably Kellie Harrington's gold medal.

"This is going to put a lot of pressure on boxing clubs now to facilitate the increase that's going to happen now over the next number of months," Lee said.

Jasus, I'd sleep for a month 😴
A huge thanks to everyone for the positive words & encouragement over the past 2 weeks. What an incredible journey our athletes brought us on🥇x2🥉x2
Brilliant to share it with @kenegan30 & @AndyLeeBoxing Thank you @RTEsport for the opportunity.🇮🇪 pic.twitter.com/MdJFlzopKS

The calls for increased funding have been loud, with Kellie's family telling stories this week of how hard she has worked to get to Tokyo.

The Independent also reported Harrington's own Buckingham Street boxing club only has one toilet, for males, despite putting in numerous grant applications.

Kenny Egan is no stranger to the Olympic setup, and explained to RTÉ how Ireland's seven qualified boxers for Tokyo 2020 was an achievement in itself.

Just one year ago, Egan recalls, Brendan Irvine was the only qualified boxing athlete. The likes of Bernard Dunne and Ireland's high performance team helped increase that to seven.

"It needs proper investment, not only from the high performance side of it but from the grassroots level," Egan said.

"Boxing clubs are a safe haven; they open the doors to everybody. They don't discriminate and that's the beautiful thing about boxing - everyone is welcome into a boxing club."

See Also: 'There’s A Number Of Options Available To Her. It’s Entirely Up To Kellie' 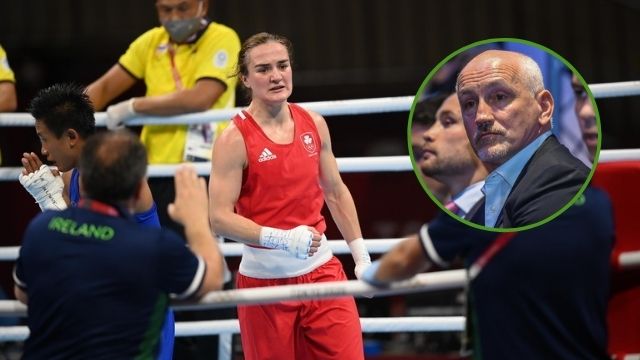 Boxing
2 months ago
By Donny Mahoney
Quigley Relishing Chance Of Joining Irish WBO Boxing Lineage
Boxing
2 months ago
By Balls Team
'I Believe In Him... We’re Going In With Every Intention Of Winning The Fight'
Boxing
10 months ago
By Maurice Brosnan
‘It Was Total War’ – Reliving One Of The Most Thrilling Fights In Boxing History
Popular on Balls
Snooker
2 days ago
By Gary Connaughton
Ronnie O'Sullivan Couldn't Get Over Stunning Mark Williams Escape Shot
32