"He's starting to act like an amateur, not a pro!"

"Quigley doesn't look like a house on fire to me! He's showing you right now! He has got doubts in his mind, that is why he is stepping off the gas."

"Quigley is not there yet. He can still be made to falter. He still can be put into a bewildered position!"

As Donegal boxer Jason Quigley continued to jab away at the frame of Glen Tapia, the persistent jibes kept coming from ESPN’s pundit, Teddy Atlas: too slow, too hesitant, too awkward.

The criticism came despite the fact that Quigley had broken his hand and torn tendons in the second round, an injury one would expect Atlas’s all-knowing eyes should be able to identify. Last year, one-handed, he completed ten rounds and won via unanimous decision to claim the North American middleweight title.

He will defend that title this Thursday against 39-year-old Mexican Freddy Hernandez, a former world title challenger. It will be broadcast live on eir Sport, but the Golden Boy card will also be live on ESPN, ensuring there is a possibility Quigley's rigid relationship is rekindled with the polemic pundit.

"I’m not 100% sure if he is going to be there or not. There is a small part of me that wants him to be there!" admits a relaxed Quigley. From Ballybofey to LA, the 27-year-old has lost none of his even-tempered nature and assures Balls.ie he would revel in the prospect of securing a 15th straight win with Atlas watching on.

There are no hard feelings now between me and Teddy at all. The man did his job. I did my job. He had his thoughts and I had my thoughts. Look I met him since and there was a bit of banter. I would love for him to be there commentating on the fight, just so I could prove him wrong!

Atlas returned to reproach another Irish boxer earlier this year. When Portlaoise's TJ ‘The Power’ Doheny won the IBF super-bantamweight title last August, Atlas dismissed the decision and labelled the judges scoring as "ugly." Quigley jests that it was all part of a trend.

"Yeah, I saw that. I didn’t actually hear the commentary initially but I got some comments wondering whether somebody Irish might have slighted him in the past. He has it in for us Irish, one way or the other! Ah, it is what it is. "

This is an extraordinary week for Irish boxing. James Tennyson will fight for the IBF super-featherweight world title and Katie Taylor will defend her WBA and IBF World lightweight titles. Michael Conlan takes to the ring in Vegas. Niall Kennedy will also fight in Boston. Add Sean McComb and Caoimhin Agyarko into the mix and a booming fight week becomes momentous.

There is no mistaking Jason Quigley's pride in being a part of that. Twice in the opening five minutes of our conversation, he cites world title ambitions. The fact that this is not just a big week for himself but for the sporting nation is at the forefront of his mind.

Down through the years we have been known for our boxing, and for producing champions. Not only champions but producing hard warriors. We always went out and gave it absolutely everything we had. We never shy away from any kind of competition. That is bred into us I think; for years and years it is in our psyche. Look at things now, the success of Irish boxing has really hit an ultimate high. It's not that people want world titles, our boxers are getting world titles! It's great to be part of this.

As a former world amateur silver medallist, Quigley is well versed with the Irish boxing circuit, amateur and pro. Those links have been maintained and he is quick to hail the comradery that exists between the fellow pugilists.

"Look, boxing isn’t an easy sport. I have known nearly all of the lads down through the years and we're always in touch, wishing each other well or congratulating each other."

"There are not too many people who know what boxers go through; it can be a very lonely sport. This is very challenging. It is great to be able to chat with peers. They are the only ones who can understand you. If you are dieting, or sore after a weeks training, those different things, it is great to have someone who knows. " 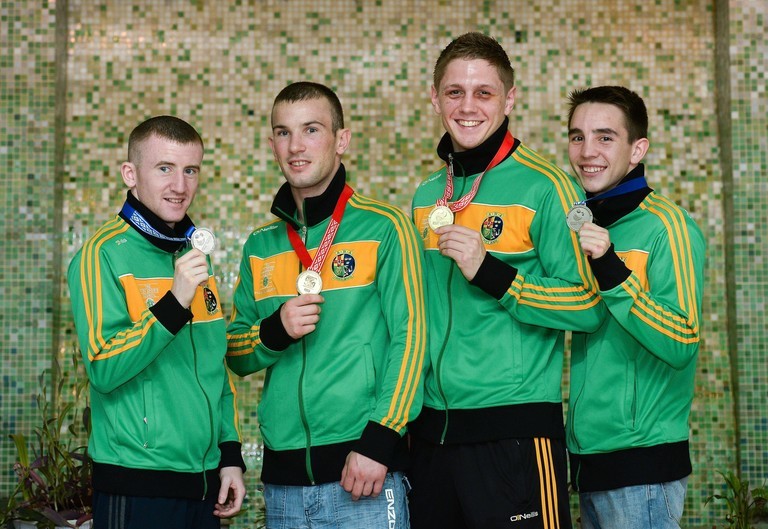 While his training camp has taken him to Sheffield, UK and Toronto, Canada, the Golden Boy Promotions boxer did return home earlier this year and attracted attention after a candid TV interview on SaturdayAM.

Quigley is feeling secure and content right now, but that has not always been the case. Such is the reality of human experience. The ascent to the top comes with highs and lows and he is keen for people to understand that. It ain't all sunshine and rainbows; no one should expect that.

We will all go through difficult times. That's inevitable. Your own individual problems will affect you regardless of the situation. Facebook, Instagram, that will show somebody over in LA on the beach in Santa Monica and people think that is real life. 'He is living this amazing life.' That isn’t real. I mean, I have had difficult times. I was shedding tears because I missed my girlfriend and my family. This is normal. We are human beings. We have highs, we have lows.

It is through this perspective that one must consider Quigley's criticism of Conor McGregor. During that TV interview, Quigley was damning of the UFC star's role in the bus incident that ultimately produced a violation for disorderly conduct. In this country, the discourse tends to avoid the overwhelming grey area that surrounds a man like McGregor and gravitate towards one extreme side. Not Jason Quigley. Highs and lows, that's what it is about.

"That man is at a level where he is an idol for many. He represents our country, his family. His actions reflect now on the country and the people he represents. My main concern is the kids who are watching. These kids' brains are like sponges. Everything they see they take in. If Conor McGregor throws something at a bus and smashes a window - they are not looking at in a mature way like an adult. They see the number of likes and views! That is wrong, what he did is wrong."

"Look, when he gets inside the Octogen you have to give him credit for what he puts himself through. The determination, skill set and discipline; you must give him credit for what he has done for MMA, for combat sports, what he has done for our country. I just think Conor McGregor could be so much better in an all-around life. Instead of half-hating him and half-loving him, he could have everyone loving him!"

As for Jason Quigley, what beckons now is opportunity - the opportunity to prove Teddy Atlas wrong, to kickstart a historic week for Irish boxing and to take one step closer to a much-coveted world title. The Irishman in primed to seize this chance with both hands.

We get past Freddie on Thursday, we get in there take care of business. I need to show him who's the younger, hungrier fighter. He has had his time, he had his opportunity and his chance. Now, the Irish have landed. I am ready to show my worth and give a great performance. This is my time.

Boxing
2 years ago
By Maurice Brosnan
Jason Quigley Suffers Shock Defeat As His Corner Intervenes Against Johnson
Boxing
3 years ago
By Balls Team
What Time Is Michael Conlan Fighting? TV Details For Next Conlan Fight
190

Boxing
2 years ago
By Maurice Brosnan
Jason Quigley Suffers Shock Defeat As His Corner Intervenes Against Johnson
Boxing
3 years ago
By Balls Team
What Time Is Michael Conlan Fighting? TV Details For Next Conlan Fight
Boxing
3 years ago
By Maurice Brosnan
Monaghan Boxing Prodigy's Big Hollywood Fight Will Be Live For Irish Fans
Popular on Balls
GAA
3 days ago
By PJ Browne
Mayo's Padraig O'Hora Using Football To Promote His Real Passion
Rugby
1 day ago
By Colman Stanley
'That Pace, That Intensity, That Organisation' All Black Legend Has High Praise For Leinster
GAA
1 day ago
By PJ Browne
Jim McGuinness's Gut Tells Him Dublin Will Win The All-Ireland
The Rewind
2 days ago
By Eoin Harrington
Watch: Brilliant Dermot Morgan Dublin Segment From 'The Travel Show' Resurfaces