'I Want Golovkin And Lee Looking Over Their Shoulders' - Balls.ie Talks To One Of Ireland's Most Exciting Young Boxers

It's the simple things. You're out in LA and every day the sun is shining. You walk out of my apartment and there's a pool, there's tennis courts, there's a basketball court, there's a gym. The beach is just around the corner from me. It's a completely different set-up.

And whenever you have all that, you miss the simple things. You miss lying in back home with a big open fire and the hailstones battering against the window! A nice cup of tea, sitting down watching whatever's on the tv...

Of course, then, you're back in Ireland for a week and you're thinking, 'Get me back to LA, quick!'"

I don't even think I've got a tan, to be honest, because every time I get home I think the lashing rain washes it off me!

A couple of weeks ago we ranked our 12 hottest prospects in Irish boxing. The response from fans, but more pertinently from fighters who considered themselves unlucky to miss out, was vitriolic and occasionally bordered on the obscene. It was gas craic.

But for every "You don't know shit about boxing," there was also a universal nod of recognition to the man we had slotted in at the top; the middleweight tornado from Ballybofey.

Since turning pro with Golden Boy Promotions last July, Quigley has taken the American scene by the scruff of the neck, amassing a perfect 8-0 record with 8 stoppage triumphs and snowballing a conjugation of fans on both sides of the pond, perhaps most notably from within the Latin American boxing fraternity.

And with two of the modern-day Latin greats set to come to blows in November - Puerto Rico's bona fide Hall of Famer, Miguel Cotto and Ireland's Mexican grandson, Saul 'Canelo' Alvarez - Ballybofey's own Golden Boy has set sights on realising another dream in what has been a 13-month freight train ride to prospect status.

Without a doubt, I'm going to be pushing to get on that Canelo - Cotto card at the Mandalay Bay in Vegas. It's going to be a legendary fight.

Oscar [De La Hoya] is very approachable, very hands on. He's always popping in an out of the gym. Every fight, press conference and weigh-in, he's always there. And I'll let him know that if he does put me on that Canelo card, I'm going to put on a show. It doesn't matter if I'm fighting in the Finn Valley Centre in Donegal or the Mandalay Bay in Las Vegas, I'm going to show everybody why I moved to LA, and that was to become the best I possibly can be.

It is, in fact, his legion of Mexican fans who - after just 8 fights stateside - have christened him with his first ever boxing moniker, and one he now intends to use throughout his blossoming career.

Well, it's the name they're calling me in the gym, in interviews and even in all the post-fight stuff.

I like it! Obviously the Mexican fans have taken to my style. I like to look at myself as... not the typical 'animal,' that just goes in there and goes mad. I see myself more as a predator, the way they stalk down their prey and take them out when the time is right.

This is a different sport to the amateurs. You have to be prepared to go 8, 10, 12 rounds. As soon as that bell goes, you need to be ripping opponents to the body, tiring them out. In the amateur sport it's about getting in and getting out, but now it's about standing down, letting your shots go and making your opponent feel them.

Every opponent I fight, they know I've been a successful amateur so they'll look to make it difficult by holding on and being awkward. And I enjoy that. Having to adapt, and just pick my moment, and then get rid of them.

Even taken from outside of a boxing or business context, Quigley's level-headedness at the age of 24 does strike as quite remarkable, especially given the company he has been keeping as part of Team Golden Boy in Los Angeles; before his seventh fight, quarter-centurion fight legend Bernard Hopkins called into his dressing room to "chill."

Indeed, Hopkins found it hard to believe the former European amateur champion and World silver medallist had fought professionally for only a year.

To be honest, it's more a confidence thing than anything. Just to be in these guys' presence and to see how knowledgeable they are, how ordinary they are. To see how much they're actually like ourselves.

But 80% of boxers are like that, they have respect for each other and get on with each other. Then you'll have some others who are big-mouths who disrespect everybody.

I don't need to press him too hard for names.

The likes of Adrien Broner pops into my head straight away.

And I can kind of understand where these guys are coming from as well, don't get me wrong. Alright, he's running around with Floyd Mayweather and they're calling each other 'Little Bro' and 'Big Bro' and all this. But I think you can get carried away with that.

And Mayweather has gotten carried away in his career as well and done a lot of stupid shit!

The likes of Broner might go around giving shit to people but I think deep down they respect everybody they get in the ring with. I'll let my fists do the talking in the ring, and I'll always be myself. Anybody who disrespects me - if they come into the ring and disrespect me, or at a weigh-in or at a press conference, they'll pay for it in the ring.

I'll let no man walk over the top of me.

It's big talk from one of Ireland's shining stars, but there's no danger of him going 'all Hollywood' on us any time soon.

If I'm not training I'll get up and watch the lads; any of the Donegal games, of course, I'm going to do my best to get up and watch them. I'm 110% behind these guys. At the same time, you have to put yourself first, and if I am preparing for a fight I'm probably not going to get a chance to see them. The same way as I wouldn't expect them to be getting up to watch me in the wee hours if they've got a match or training the next day! But any time I get the chance, I get behind them, definitely.

They didn't have a great year this year, but I know we're going to come back twice as strong. There's a lot of good players on that team and a lot of talented younger players on the way through, so I'm really looking forward to the future for Donegal football.

And looking forward to getting up bright and early and watching them from LA as well!

Already a Sky Sports scholar, Quigley was recently asked to host a dinner for the Special Olympics athletes in his adopted hometown.

But the man who moved from The Hills of the north-west to the Woodland Hills of California knows too well that he himself is still shedding the unforgiving 'prospect' label, and insists that, while he's naturally inclined to seek success as soon as possible, patience under his trusty teams at SheerSports and De La Hoya's Golden Boy will prove crucial on what seems an inevitable path to stardom.

I want to get to the top; every young fighter just wants that belt. But we have to be patient, and that's one of the reasons I turned pro so early. I turned pro very young because I never want a point in my career where I have to rush into a fight.

I'll be 110% ready to lift that belt when the time comes, because I've put a lot of years into this sport already, and I'm sure as hell not going to leave it without getting what I want out of it.

But I want my career to be as perfect and as possible, and my progress to be as steady as possible.

I'm 8-0 now with 8 knockouts. In a year's time, year-and-a-half, I want the likes of 'Triple G' [Gennady Golovkin], Cotto, Andy Lee - I want all of these guys to be looking over their shoulders, and have their eye on me. I want them to know I'm creeping up on them, biting on their heels.

I've no interest in a title that nobody has heard of. I want to beat the best to be the best. Whoever the best is, I'm aiming to take them out of there and take everything they have.

A potential All-Ireland clash with Limerick's Lee down the line sounds mouth-watering, and 'El Animal' says he is "100%" certain that he can drag a Golden Boy promotion back to the Emerald Isle in the not-too-distant future. But only if it's a fight he deems worthy of the "surreal" Irish support he has received on his journey to date.

This is definitely going to happen. I'm here now to build my record and to put my name on the map, to make a lot of noise over here in America. And the last thing I want is for Irish fans to have to travel to America to see me. I sincerely appreciate the ones who have, but I also know plenty who would love to and can't.

But I also don't want to come home for a six or eight-round test. I want to bring a massive fight back. I want to sell out whatever arena is available. I want the place packed full of Irish supporters, and as many Donegal lads in there as possible. Because I know the Irish fans and the Donegal fans are absolutely unbelievable.

The support I've been getting in from home has been just unreal. Every single one of them mean the world to me. And the guys who've been with me since the start back in Donegal, or even people who are only beginning to hear about me now - I really want to bring a massive fight card, a Golden Boy card back to Ireland and repay them, and make a lot of noise. 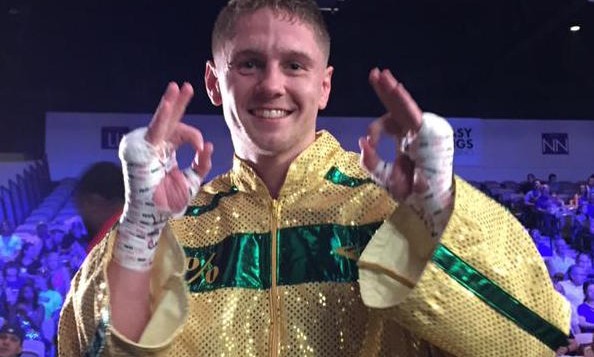