Ireland's Fantastic Four: The Middleweight Boxers Nearing The Top Of The World

What is the essence of sport?

Participation would be the appropriate answer, getting everybody involved, a fit and healthy nation; but as much as we may like to see ourselves as bastions of inclusiveness the Irish boast a patriotic streak, one that lends itself to a perennial infatuation - wanting to serve it up to the big man, punching above our weight, striving for a seat at the top of the world - a nation of Scrabby Doos.

And if there is one branch of Irish sport delivering on these public aspirations, it's boxing's middleweight division.

Boxing sits on a curious perch within the Irish conscience, our attention reserved, it seems, for just the select few. The likes of Katie Taylor and Michael Conlan plough their own furrows and are deservedly benefitting from waves of support, but there's no doubt the strongest division on the Irish boxing scene is one which has managed, for the most part, to avoid the public's obsession.

In the early hours of Sunday morning for example, Dennis Hogan fought for the WBC middleweight title, a division so peppered with talent it could be easily regarded as the toughest there is. Names like Canelo Alvarez, Gennady Golovkin, Demetrius Andrade, Daniel Jacobs and more swim ominously in these predator-infested waters. Jermall Charlo, Hogan's opponent in Brooklyn on Saturday night, probably deserves to have his name in that same bracket. Some would say it already is.

Congratulations @FutureOfBoxing on the win last night and thank you to all my supporters for your love and messages. We came up short last night but we will be back. The journey for the world title continues.

On the night a vicious uppercut proved lethal, sending the Kilcullen man tumbling and almost out and over the apron. A brave endeavour almost ended by the ferocity of a singular punch. A subsequent barrage bringing down the curtains.

But he's in illustrious company, having made a name for himself over these last few months, and whether or not he decides to drop back down a division, and he has said that he will, big opportunities lie ahead. Just as they do for Gary 'Spike' O'Sullivan - the epitome of the "Lemme at 'em" attitude espoused by Scrappy himself. In January he fights Jaime Munguia as he continues to manoeuvre his way towards a world title shot, his antagonistic style and enthusiasm making him a bone to the dog of the sport's big names.

Meanwhile, talk of a showdown between Luke Keeler and Andrade has been gaining momentum, with suggestions that Keeler's shot at the world title could come as soon as next month in Miami.

Last Thursday night, Jason Quigley produced a much-needed convincing response to the first loss on his record and while the Donegal man is further away from a world title bout, it cannot be said he's not within distance. The trajectory of Hogan's career is just one case in point.

After only 18 fights in his career, similar to Quigley as we speak, he had still only fought for Australian titles - he's living in the country; 18 months later he was fighting for a interim world title. There's nothing to say Quigley cannot fight his way into a similar position, even if large swathes of his native country remain oblivious to his feats.

At the same time, the lack of superstar status in Ireland,  à la Taylor and Conlan, won't faze any of the fighters. As Hogan told the Irish Times last week, he carries on regardless.

We will have [Australia's] Channel 7 and Channel 9 over again [in New York]. They really get behind the athletes over here. It's just not like that in Ireland – it's not like that for me anyway. I don't know any different and I don't expect any different. And I'm okay with that.

I can see why they might make the journey, albeit a 20-hour journey, while from Ireland it's probably six hours. But I have begun to get a little coverage which I'm very grateful for.

It may seem unjust, and perhaps it is, but garnering spotlight isn't a primary objective for these fighters and neither is winning world titles. Their primary objective is to provide for their families and for themselves. Pugilism is a fickle game, and it can also be a short one. And it means boxers have a duty to earn as much as can before leaving their sport in the rear-view mirror.

The fights Hogan and O'Sullivan are securing, and the bouts Keeler and Quigley are anticipating, bring an element of financial security and if a title is won along the way, it's an immensely welcome bonus

You only need to familirise yourself with the career of Mike McTigue, a fighter who earned a position in Bleacher Report's ranking of the top-ten Irish boxers of all time and a man  who held the light heavyweight world title at a time when belts weren't so abundant, to realise just how cruel this sport can be. Not even its champions are immune.

The native of Clare boasted a glittering career, which was highlighted by the winning of a world title in Civil War-torn Dublin. After confronting Battling Siki at the La Scala Theatre for 20 punishing rounds, he become the first Irishman to win a world title on Irish soil. Not that it granted him a privileged existence.

He returned to New York as an Irish hero and yet still died in poverty, confined between the four walls of a mental institution. Whatever boxers say in front of  microphones and cameras, they understand this to be the reality of their trade, and a few major pay-days can see them avoid what became of McTigue. If boxing can chew up and spit out a figure like McTigue, it can do the same to any of this particular quartet.

That they have yet to receive the swell of  support, from a country famous for its fandom, is strange all the same.

And so the prospect of major all-Irish fights in Ireland remain in the imagination, harsh realities accelerating the need to earn as much as possible as quickly as possible.  But the prospect of an All-Irish fight involving, let's say, Hogan and O'Sullivan is neither inconceivable. Both men have said they're open to it.  Whether it's on St Patrick's Day in New York or a little further down the road  remains to be seen, if indeed it transpires at all. 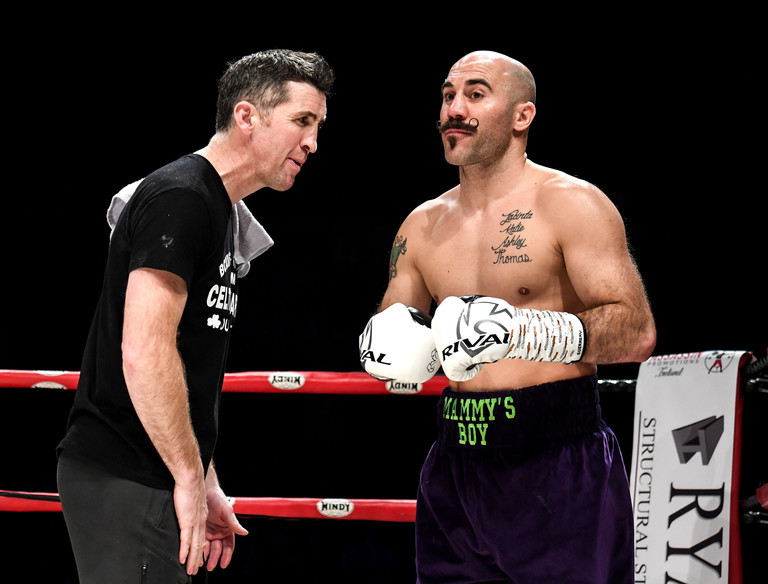 Of course this March comes a little quick and since both men have the luxury of  reputations that are still attractive to the boxing aristocracy, it may well become an event for over the horizon. By then, Keeler and Quigley could enter the fray.

Either way, there's a fistic feast to be made - somewhere, someday, somehow.

Maybe then this quartet will receive their due adulation and gain a status among the country's top stars. It won't happen today so until it does, they will continue to do the necessary: providing for families, developing reputations and hoping they trundle their way towards the titles they crave.

If the public miss out on their journeys, it's certainly not on them.