Relative to age, 25-year-old lightweight boxing prospect Jamie 'The Nuisance' Kavanagh might state a claim to having the most fascinating career in Irish sport. Tomorrow, we'll bring you a full interview with one of Ireland's brightest fight talents on the horrific events during his weigh-in at the Regency Hotel, bouncing back from the tragic loss of his father, and his advice for young Irish people who chase the American Dream. Tonight, his old pal prepares to fly the Irish flag in Las Vegas.

Kavanagh might be the only man alive who can stake a claim to have sparred both Manny Pacquiao and Conor McGregor.

He first encountered the former when he moved to Los Angeles, aged 18, to join Golden Boy Promotions and train under Freddie Roach. The latter has been a friend since childhood; a friendship which began in the pair's hometown of Crumlin, and blossomed in the local boxing gym.

I was always aware of him. His friends are my friends and of course you run into each other a lot. For example my next door neighbour, Lee Dunphy - a good friend of mine - is still very close to Conor, even now.

We all grew up together, and then obviously he's in the boxing so we boxed together, went on trips away together. As you know, Dublin's a really small place.

Back in November, Kavanagh finished a tricky opponent in Oszkar Fiko inside seven rounds at Dublin's National Stadium - the former seven-time national champion's first ever professional fight in Ireland. 'The Nuisance' was cheered on ringside by 'The Notorious', who, in a relatively low key interview, spoke to BoxNation about his admiration for Crumlin Boxing Club and the Dublin fight scene:

McGregor's links to boxing go further than mundanely routine calls for him to fight Floyd Mayweather but, to fans of the sweet science in particular, the lauding of his 'boxing skills' can seem somewhat blown out of proportion; the UFC's official website once listed McGregor as a former national boxing champion, which unlike his mate from up the Crumlin Road, he never was.

However, Kavanagh recalls the current UFC featherweight champion packing a serious punch in their time spent training together under Phil Sutcliffe on the Windmill Road:

I always remember Conor as a game kind of boxer. He was very game. He loved to fight. But he was also very strong: he could seriously bang. So, to beat Conor you had to use the technical aspect, your boxing technique. You had to use your speed and move in and out very quickly because I remember he did hit very hard.

And look at him now. He just knocked out, in his last fight, the pound-for-pound number one in the UFC, so that goes to show that he always did hit hard. 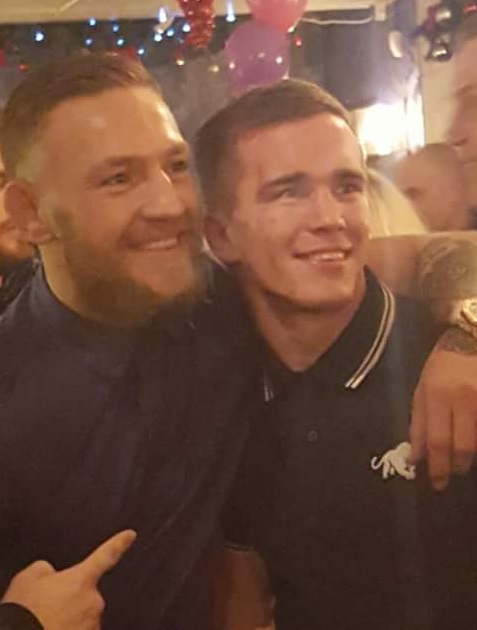 Where 'Mystic Mac' is yet to truly endear himself to the Irish boxing media, it's no secret that Ireland's boxers appreciate their former peer. And Kavanagh makes no bones about returning the support he has received from McGregor:

Of course, you'd look up to that guy. The UFC is one organisation and boxing is another organisation. He is the most talked about fighter on the planet as we speak. I would say [in both sports]. I know you have the likes of Manny Pacquiao, guys like Amir Khan going around, but they're only really spoken about when a fight comes around. Conor is always in the media attention,  not just when he's fighting.

I mean, how many times has he fought in the last year? He has fought so frequently, not just like your casual UFC champion. He's fighting tonight and they're saying he's going to fight in July at UFC 200, you know what I mean? That's so quick. Like, you don't see champions do that. They did it a long time ago, years ago, they fought frequently. But now a world champion in the UFC or a world champion in boxing fights maybe two times a year. And sometimes just once a year.

Like most, Kavanagh feels McGregor will dish out a bit of a dusting to his out-matched opponent at UFC 196, but he doesn't think the fight will end in the first round:

I don't think Nate [Diaz] has had enough time to prepare for Conor. Obviously the big factor is Conor is moving up, but I think Nate will stand there and trade with Conor and that's going to suit Conor down to a tee. I think maybe the second round [McGregor will end the fight]. Nate Diaz is a tough fighter and he takes a lot of punishment. He doesn't ever want to back down.

Our full interview with Jamie Kavanagh about the horrific events at the Regency Hotel, future fights, his advice to Jason Quigley and his fascinating career to date will be available tomorrow.